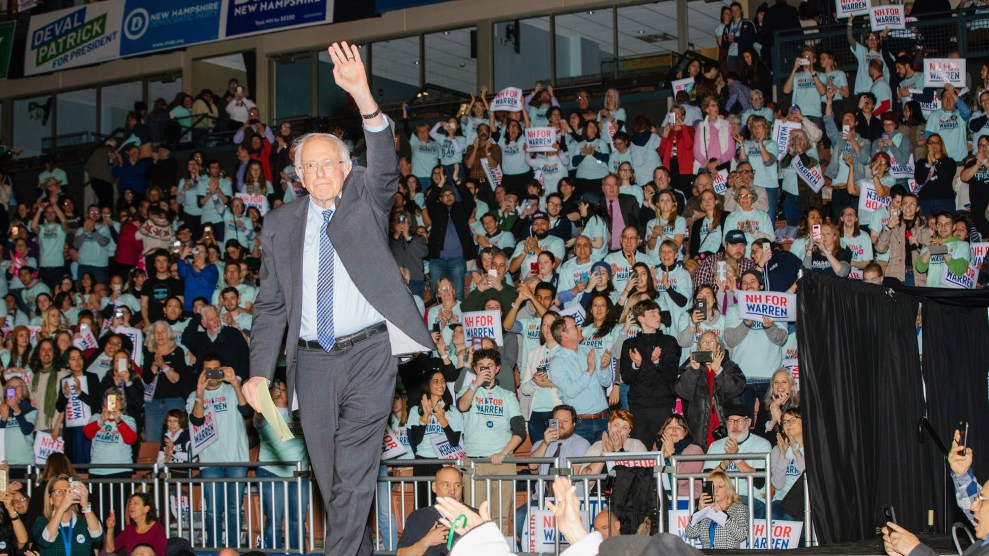 Sen. Bernie Sanders promised to to ignite a movement that would shake up the Democratic establishment, and after handily winning the Nevada caucuses on Saturday, he’s delivered. Sanders ran away with a victory in Nevada, winning 46 percent of the vote. His closest competitor, Joe Biden, won just over 19 percent.

And the big scary liberal establishment is losing it. Exhibit A: MSNBC host Chris Matthews. In his caucus commentary on Saturday night, he mentioned that he’d been reading about the fall of France during World War II, and then made this ill-advised analogy to Sanders’ victory: “The general, Renault, calls up Churchill and says, ‘It’s over.’ And Churchill says, ‘How can it be? You’ve got that greatest army in Europe.’ And he says, ‘It’s over.'” That ham-fisted anecdote drew instant criticism from those who thought Matthews was comparing Sanders to Hitler, including Mike Casca, the campaign’s communications director.

never thought part of my job would be pleading with a national news network to stop likening the campaign of a jewish presidential candidate whose family was wiped out by the nazis to the third reich.

“the fall of France in the summer of 1940. …it’s over.” Mathews comparing victory of Sanders, who’s fathers’ family was wiped out in the holocaust, to the Nazi occupation of France. https://t.co/OvLrNJRTvc

The hashtag #msnbcmeltdown started trending on Twitter on Sunday morning and there have been calls for Matthews’ resignation.

The flip side of the establishment hand-wringing that Matthews was channeling is that Sanders’ victory in Nevada was a monumental moment for progressives. The state’s caucus was a test unlike any other so far in the Democratic primary, writes Mother Jones’ Tim Murphy, and it has cemented Sanders as the frontrunner:

But while Sanders’ opponents may agree that he won’t make the best nominee, none can agree on how to actually stop him. In the meantime, Sanders has built a political movement that might make any kind of maneuvering aimed at denying him the nomination irrelevant, and one that by its very existence neutralizes one of the most compelling arguments his opponents once had.

Unlike Iowa and New Hampshire, the Silver State isn’t a racially homogenous white voting bloc. And Sanders has built a racially and ethnically diverse coalition of young people whose influence will be further tested as Super Tuesday nears. If Sanders sweeps those primaries in 10 days, get ready for an even bigger freakout.