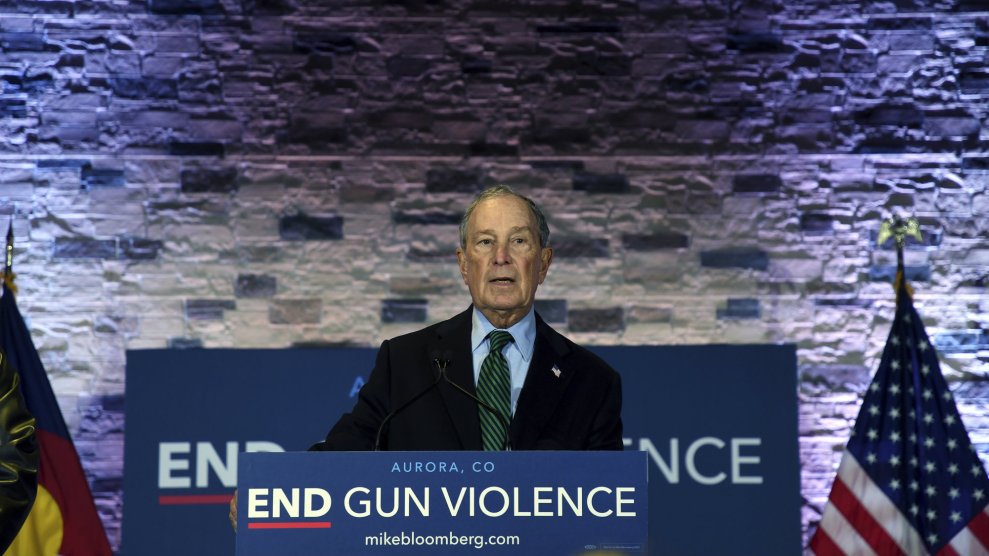 Michael Bloomberg speaks to gun control advocates at a rally in Aurora, Colo. in December.Thomas Peipert/AP

Most of the action in the presidential race is in New Hampshire right now, but campaign surrogates for Michael Bloomberg spent the weekend traveling throughout Virginia to highlight his record on gun violence prevention. And gun rights activists were out in full force to show how much they hate the former New York City mayor.

A statewide Bloomberg bus tour wrapped up Sunday evening in the DC suburb of Arlington, a Democratic stronghold in the Old Dominion, which votes next month on Super Tuesday. There, dozens of Bloomberg volunteers and supporters—including DC mayor Muriel Bowser—were met with fierce opposition from more than 100 gun rights activists who crashed the event and attempted to prevent attendees from getting inside. The demonstrators disrupted speeches and harassed people on their way out.

Here in Arlington, Va. for a @MikeBloomberg campaign event with gun control activists and DC mayor @MurielBowser, hundreds of gun rights activists are here in protest, blocking attendees from getting in. pic.twitter.com/l5MgFhwcjx

It was a tense scene, especially considering that Bloomberg was nowhere near it—he was campaigning in another Super Tuesday state, Massachusetts. It highlights the unique position that Bloomberg, a billionaire, occupies when it comes to gun control issues in Virginia. Of the many philanthropic enterprises that Bloomberg has his hands in, gun control is probably the one for which he’s best known. He founded and largely finances the gun control group Everytown for Gun Safety, which had a big presence in Virginia during last year’s elections, outspending the NRA and helping to flip the state legislature blue for the first time in decades. As a result, state lawmakers are fast-tracking gun control laws, much to the ire of some gun rights activists, who held a massive 2nd Amendment rally in front of the state capitol in Richmond last month.

At Sunday’s campaign stop, though, the commotion outside did not muddle the message from the gun control activists who spoke. “I could lay down and take it, but I’d rather fight,” said Brenda Moss, a Moms Demand Action volunteer who lost a son to gun violence. Moss—along with Bowser and Bloomberg senior adviser Debbie Weir—was one of several speakers to briefly address the crowd before protesters who had snuck into the rally jumped onstage and grabbed the mic. Campaign staffers promptly blasted Fatboy Slim’s “Praise You” to drown them out as they were escorted from the event. The rally concluded, with Bloomberg volunteers and supporters mingling for the remainder of the evening.

Though Bloomberg’s late entrance into the already crowded Democratic race was first met with skepticism—especially his peculiar strategy of skipping the first few states and focusing on Super Tuesday—he’s starting gain more traction, thanks in no small part to the massive amount of money he’s spent on his own campaign. And the message and enthusiasm among campaign volunteers and supporters that I met at Sunday’s rally was uniform: Bloomberg is the only candidate with the resources to take on Donald Trump, they argue.

“This is the first time I’ve been excited about a candidate since Obama,” one Bloomberg campaign volunteer told me. Another volunteer said he likes Bloomberg because “he is exactly what Donald Trump is not, but exactly what Donald Trump wants to be.” Still, all the Bloomberg supporters I talked to Sunday said they’d vote for whoever ends up getting the Democratic nomination—a stance that echoes Bloomberg, himself, who has promised to fund a massive independent effort to support whoever receives the party’s nomination.

More so than any of the other Democratic candidates, Bloomberg has become a polarizing figure in Virginia. Protesters outside Sunday’s event held signs that compared Bloomberg—who is Jewish—to a Nazi and chanted “sic semper tyrannis” as security guards escorted out attendees who were ready to leave.

A couple of protesters snuck in and tried to crash the event, campaign staff tries to play them off to…. Fatboy Slim. pic.twitter.com/fE0uSADfMg

Tom Speciale, a US Army reservist who is running for the GOP nod to take on Sen. Mark Warner (D-Va.), was one of the protesters who crashed the Bloomberg event and attempted to speak from the podium. When I caught up with him afterward, he said he didn’t like the former New York mayor’s “socialist values.” I mentioned to him that an actual socialist is the current Democratic frontrunner. Speciale shrugged. “They’re all socialists,” he said.