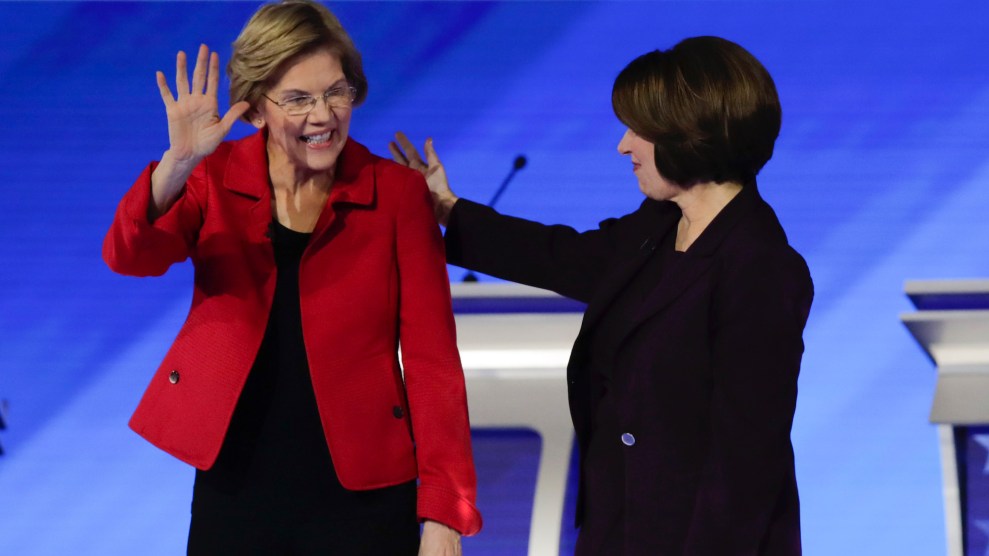 Three weeks before Iowa caucus-goers put their confidence in two men, the New York Times placed its confidence in two women: Elizabeth Warren and Amy Klobuchar. The paper of record explained its highly unusual decision to endorse two candidates by delineating what editors perceived to be the two visions emerging in the Democratic field: a “realist” one that called for a return to a “more sensible America,” and a “radical” one that called for upending existing political and economic systems. Klobuchar, cast as the “realist,” and Warren, painted as the “radical,” were “the most effective advocates for each approach,” the Times said.

Some New Hampshire voters, down to their final moments of decision-making before they head to the polls, also think that Klobuchar and Warren are the field’s two best candidates. But these voters are drawn to them based on their personal and professional similarities, not their ideological differences.

“They’re both very bright, have a lot of experience, and have accomplished a lot,” Nancy Turkington, a doctor who works in Lebanon, New Hampshire, told me at a Warren event there Sunday night. “And I think they both have been very thoughtful about the feminist agenda.”

Susan McAtavey, who I met at Pete Buttigieg’s rally in Dover on Sunday afternoon, told me she was also considering Warren and Klobuchar. “I would love to have a female candidate—I’m not married to the idea, but I’d love that,” McAtavey said. Though she considers herself to be progressive and believes Warren aligns more closely with that vision, “I’m always impressed with how well [Klobuchar] does in debates,” McAtavey said. “I don’t know, I love Klobuchar.”

In conversations with these Klobuchar-Warren fans—across two events in New Hampshire yesterday, I met 10—it became clear that these are the résumé readers of the Democratic coalition. They like the two senators’ records of achievement, often citing Warren’s establishment of the Consumer Financial Protection Bureau and Klobuchar’s oft-touted record of passing more bills than her fellow senators in the race. They also cite Warren’s line from the January debate, when she told viewers that only she and Klobuchar had won every election they’d run in, while the male candidates present had lost 10 elections between them.

Voters’ familiarity with these accomplishments is perhaps attributable to the fact that women candidates have to flog those achievements harder. As my colleague Pema Levy wrote last month, a persistent side effect of sexism is that voters are often more skeptical of women’s competency, a dynamic that requires those candidates to “work harder to prove their competence to voters more skeptical of their readiness,” Levy wrote. Whatever the reason, it’s made a difference for voters I spoke with who like both Klobuchar and Warren. “They have records,” Mark Soza, an undecided voter I met at a Joe Biden rally in Gilford, New Hampshire, told me. “That’s very persuasive.”

To be clear, plenty of voters are still thinking about ideological differences. At the Buttigieg rally in Dover, several New Hampshirites told me they’re choosing between Buttigieg and Klobuchar because of those candidates’ more moderate stances; at Warren’s event in Lebanon, there were plenty of Warren fans who see fellow progressive Bernie Sanders as their second choice.

But voters looking beyond ideology told me they find fault in both Sanders and Buttigieg, the male candidates whose platforms align most closely with Warren and Klobuchar, respectively. Turkington told me she didn’t care for Sanders because he’s “not willing to compromise.” As for Buttigieg: “It’s incredible to think a mayor from a small town can compete with these senators who have accomplished so much.”

The question remains, of course, whether these candidates’ records and voters will put either candidate over the top. Warren finished third in Iowa with eight delegates and Klobuchar finished fifth with just one. Recent New Hampshire polls leading up to the nation’s first primary have found both candidates oscillating between third and fifth place behind Sanders, Buttigieg, and sometimes Joe Biden.