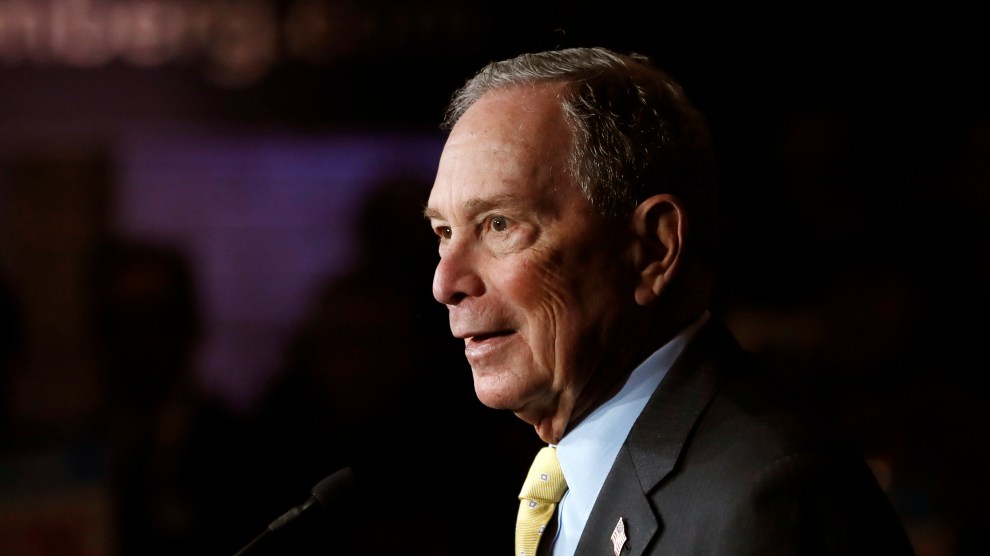 The announcement comes as the former mayor attempts to rebound from intense criticism that resurfaced last week over his previous support of stop-and-frisk policing that disproportionately harmed people of color during his tenure in New York City.

Bloomberg dropped his criminal justice platform one day before he joins his first Democratic presidential debate on Wednesday. His plan—which calls to halve the country’s prison population by 2030—includes many of the same proposals put forward months ago by other major Democratic candidates. Most of them have called for sweeping reforms to sentencing and policing that would have been unthinkable even a decade ago, reflecting how far the party has come in its approach to crime and punishment.

30k ft reactions to Bloomberg’s criminal justice plan so far: 1) he has no record to make him seem credible on any of these promises 2) whole lot of Community Policing garbage mixed in here 3) whole lot of promises to do things the president / federal govt really can’t do

Given Bloomberg’s controversial record on stop-and-frisk, voters may need some convincing to believe he is progressive on criminal justice reform today. The policing strategy, which involves stopping individuals for any vague suspicion and searching them without a warrant for drugs or weapons, began in New York City before Bloomberg came to office in 2002 but was expanded dramatically under his administration. It has been discredited because it led police to disproportionately target people of color, so much so that in 2013 a federal judge ruled that its implementation in the city over the prior decade had violated their constitutional rights.

After years of defending the practice, Bloomberg apologized in November for the way it affected minorities when he was in office. He came under renewed backlash last week when audio from one of his 2015 speeches surfaced online, revealing racist comments he made to support stop-and-frisk at the time. In his speech, he said the city’s police department “put all the cops in the minority neighborhoods” because “that’s where all the crime is. And the way you get the guns out of the kids’ hands is to throw them up against the walls and frisk them.” Last Thursday, he responded by apologizing again for not acting sooner to denounce the practice.

Bloomberg’s new criminal justice reform plan does not mention stop and frisk directly. But it does aim to discourage over-policing of communities of color. Like other candidates, he proposes mandatory training for officers about implicit bias. He also suggests that police should only use deadly force when it’s necessary, as opposed to the current standard in many states that allows them to do so whenever they reasonably believe they are in danger; he says he would support legislation to make this change for federal officers.

He calls for the decriminalization of “small amounts” of marijuana use and possession and pledges to commute sentences for people serving prison time for these offenses, some of whom may have wound up behind bars because of stop-and-frisk. He does not go as far as other candidates who have called for legalization, and he says states should ultimately decide their own policies.

“There’s the old saying that ‘when someone shows you who they are, believe them.’ @MikeBloomberg has shown that he is no ally to marijuana reform or criminal justice reform more broadly.” – @NORML’s Erik Altieri in @rollcall https://t.co/VUyQvq8e30

Along with reforms to policing, Bloomberg put forward several ideas to drastically lower the US prison population and assist young men of color who are disproportionately incarcerated. He calls for investments in mentorship programs—including My Brother’s Keeper, started by the Obama administration—to keep teen boys out of the criminal justice system. Like the other major Democratic candidates, Bloomberg says he wants to “end federal cash bail,” a system that keeps jail populations high by requiring defendants to pay courts for their release before trial. (But he waters down that proposal by supporting an exception for judges to request bail “in cases of demonstrable flight risk such as white-collar crime.”) And he pledged to commit about $22 billion to reforms at the state and local levels, where a majority of Americans are imprisoned. He also wants to drastically expand funding for public defenders, something that Sen. Kamala Harris has pushed in Congress and other candidates have also supported.

While some of Bloomberg’s ideas are on par with the criminal justice proposals of other Democratic candidates he’ll face on the debate stage tomorrow in Nevada, it remains to be seen whether the former mayor’s plan will be enough to win over critics who may not be eager to forgive him for his stop-and-frisk legacy anytime soon.