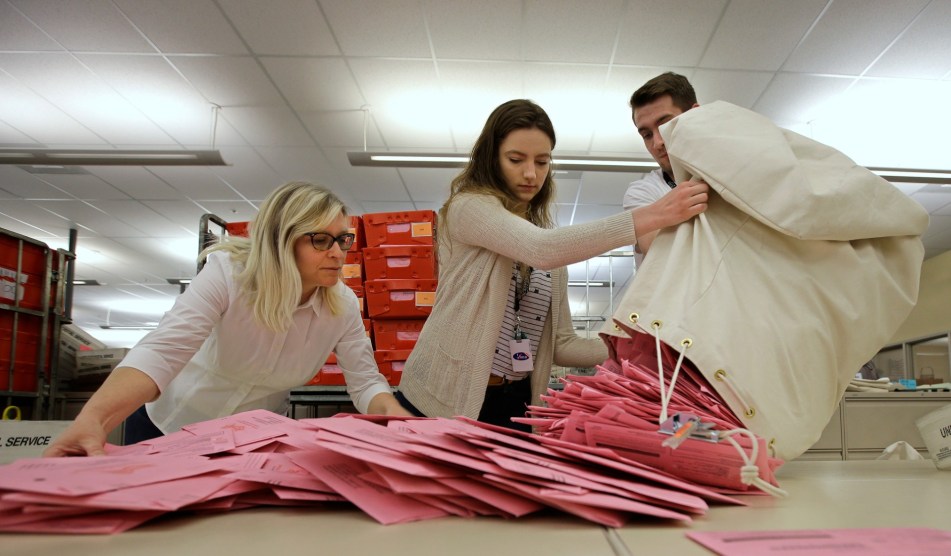 Now that Super Tuesday’s finally here, all eyes are on California. Vermont Sen. Bernie Sanders—who remains the frontrunner for the nomination despite former Vice President Joe Biden’s weekend victory in South Carolina—is the presumptive favorite, but if this year is anything like previous elections, we’ll be waiting a while for the results.

That’s because California delivers election results at a maddeningly slow pace—something that’s rooted in the state’s laws designed to make every vote count, and to get the count right. As Mother Jones previously reported, one significant factor is the state’s extensive vote-by-mail system. While it facilitates voting for people who can’t easily get to polling locations, such as rural or older voters, the trade-off is that the ballots won’t be counted until well after March 3: Unlike in other states, California voters have until Election Day to postmark their ballots. (They must be received by the state within three days of the election.)

California also counts the largest number of provisional ballots, which allow people to cast a vote even if their name isn’t on the list at their local polling place. Young and poor voters are mostly likely to move precincts and have irregularities in their voter files, and they also tend to use provisional ballots more than anyone else. As my colleague Pema Levy explained in 2018:

Defenders of California’s system say the high provisional ballot rate means that California allows people to vote who would be turned away in other states. California also ends up including nearly all provisional ballots in the final count, but the process is slow and painstaking. Each person’s eligibility must be verified, and officials have to ensure that the voter didn’t vote twice. Many provisional ballots come from voters who go to the wrong precinct on Election Day, and election officials must transpose their selections onto ballots from voters’ correct precinct to ensure that they do not cast a vote in local races they are ineligible to vote in.

The most competitive races can take weeks to call. This may come as bad news to anxious poll watchers who are counting on California to be a major weathervane in its first year as a Super Tuesday state. In 2017, lawmakers moved up California’s primary election date from June to March in the hopes that it would give its 39 million residents more influence in choosing party nominees.

But the effect might not be clear-cut, says Mindy Romero, who directs the California Civic Engagement Project at the University of Southern California. Even if Sanders appears to be winning immediately after the election, the delegate count may not be definitive until weeks later. “You can have a clear state winner,” Romero said, “but what really matters is the congressional districts and making that 15 percent state threshold. The exact number of delegates, that distribution, we won’t know for quite a while.”

The Sanders camp—like everyone else—will just have to wait to find out.