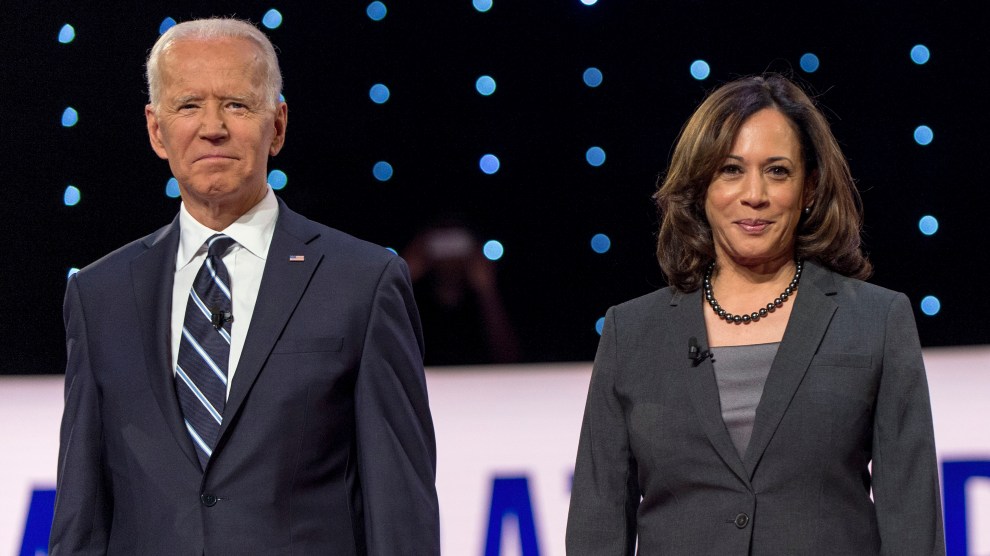 Sen. Kamala Harris (D-Calif.) endorsed Joe Biden for president Sunday morning, several months after Harris ended her own historic bid for president. She is just the latest of several former presidential contenders to align behind the former vice president.

“We need a leader who really does care about the people and who can therefore unify the people. And I believe Joe can do that,” she said in a video posted to Twitter.

Kamala — You’ve spent your whole career fighting for folks who’ve been written off and left behind — and no small part of that alongside Beau. From our family: thank you.https://t.co/ePtRKVjzXB

While the endorsement doesn’t come as a surprise—in fact it seems as if Biden accidentally leaked it himself yesterday—it does paper over one of the most unforgettable moments of the 2020 campaign so far. Back in June—1,592,867 years in campaign time—Harris confronted Biden on stage at a Democratic debate, getting deeply personal in confronting her opponent over his warm remarks about segregationist senators. As my colleague Jamilah King wrote at the time:

She started with Biden’s recent whimsical recalling of his relationship with segregationist senators James Eastland and Herman Talmadge, and then pivoted to a deeply personal story of being in the second class to desegregate Berkeley’s public schools while then-Sen. Biden opposed the busing that made it possible. It was an exchange that put Biden on the defensive, and won widespread praise on Twitter.

As a reporter and San Francisco native who has followed Harris’ career since she was district attorney of my hometown, it’s hard to overstate just how jarring the moment was. Harris’ oratory wasn’t a surprise; she’s become pretty memeable in the Senate for her brutal questioning of several people in Trump’s orbit. What was different was how personal Harris got.

She doesn’t talk about herself often, which seems weird for someone in the public eye, but it’s true. Over the years she’s attributed this to her mother, Shyamala Gopalan, a woman who emigrated from India at 19 and went on to become a breast cancer researcher. “I was raised in a way that one does not talk about themselves or their feelings,” Harris, laughing, told The Cut in January. She grew up in an analytical household, sure, but perhaps more importantly, it was also one that was helmed by a dark-skinned immigrant woman with an Indian accent who was forced to fight her own battles every day.

That doesn’t mean Harris hasn’t tried to meaningfully use her personal biography. Her career is nothing if not a series of firsts: first black woman to be DA of San Francisco, first black woman to be attorney general of California, first Indian-American woman and second African-American woman to serve in the Senate. But she doesn’t dwell on those firsts often, and seems almost uncomfortable when they’re brought up, usually saying something along the lines of: My mother always taught us that it’s okay to be the first, but make sure you’re not the last. …

But note that these personal tidbits, doled out ever so carefully, are about race, but they’re not really about race. Like the Chisholm-inspired campaign colors, they checkmark the historical context of her life, but they’re facts, not feelings. There’s still a reserved quality that some voters have picked up on, one that’s probably sexist and unfair, but also real. There’s also the very real dismissal that women and people of color get from white establishments whenever they’re seen as too focused on their personal narrative, which is misread as playing in too deeply to “identity politics.” The unspoken critique is that they’re lazy, unqualified, and focused on themselves instead of the work. In an April interview with “Pod Save America,” Harris said such critiques are used to “shut people up.”

It was a pivotal moment in her campaign, and while it wasn’t enough to ultimately sustain it, I have a feeling it will remain a key point in both her personal political trajectory and in how we talk about race (and hold candidates accountable) on the campaign trail.

Harris says she’ll join Biden at a rally in Detroit Monday night, just a day before Michigan votes in another crucial primary.