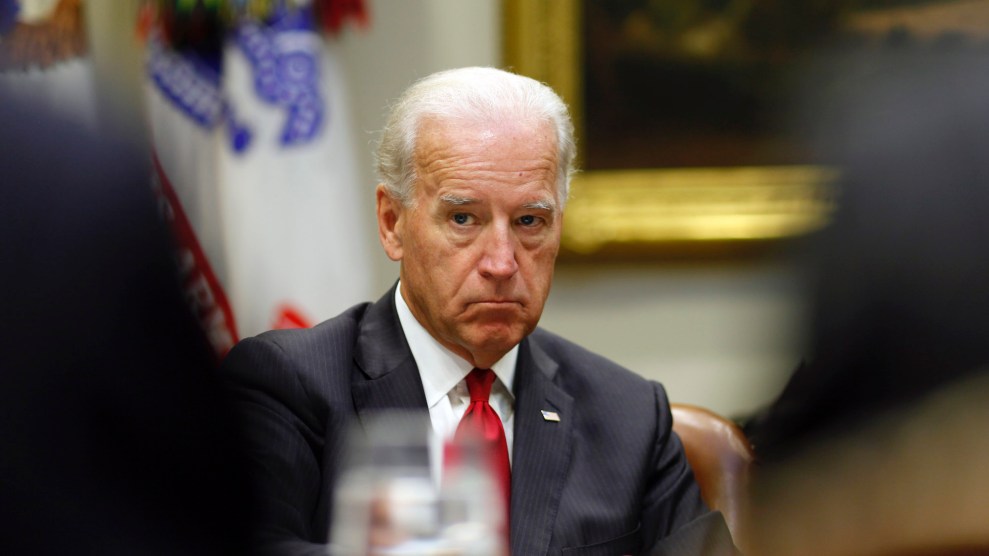 The pandemic-induced economic recession has put at least 28 million Americans out of work, and much of the blame for that recession falls on President Trump. But the president hasn’t let that stop him from attempting to brand the recovery efforts under his name. After Congress passed its first $2 trillion emergency relief package in March, the White House nearly slowed the delivery of the $1,200 stimulus checks because it wanted to put the president’s signature on them. When the idea was downsized to a tiny “Donald J. Trump” printed in the check’s memo line, the White House, undeterred, sent a separate letter to check recipients assuring them that the president was “working around the clock” to end the pandemic. In bold, inch-high script, the letter is signed “Donald J. Trump.”

Trump’s general election opponent, Joe Biden, has also seen the country through a recession. When the Obama administration took over the White House in 2009, it inherited an economy in free fall. Obama put Biden in charge of overseeing the recovery, and those who worked alongside him credit the almost complete lack of abuse or fraud of government funds to Biden’s careful oversight. But eleven years is a long time. The recovery from the Great Recession kickstarted the longest period of sustained economic growth in US history, but it isn’t necessarily remembered that way—if it’s remembered at all.

It’s no accident that voters might not recall how the stimulus bolstered the economy. Obama, Biden, and their economic advisers crafted the recovery measures from a technocratic lens, delivering money to Americans in a way designed to get them to spend it—without much consideration as to whether it would give the White House its due credit. While there might be something crass about Trump’s egocentric boosterism, the stumbles Democrats took during the last major recession show the dangers of politicians trying to underplay their role, something that could hurt Biden as he gears up to face Trump.

The American Recovery and Reinvestment Act—the “stimulus”—had been Obama’s first major legislative achievement, and the bill’s Keynesian strategies reflected the druthers of its academic-minded president. Chief among those had been a payroll tax credit that returned $400 to $800 to taxpayers through their paychecks over the course of a year. The decision had been a practical, not political calculation: President George W. Bush’s administration had learned that people tended to save rebate checks, not spend them—the opposite of what Obama needed to get the economy humming again.

Biden had pushed Obama to take more credit for the payroll tax cuts, according to a recent New York Times story—he even suggested that Obama send a letter from Treasury to encourage taxpayers to spend the money. But Obama believed good deeds spoke for themselves. As it turned out, they did not. The payroll tax cuts had put more money in the pockets of the still-employed, but the slow drip across several paychecks made that extra cash hard to recognize.

As were other signs that the recovery was working. Six months after stimulus’ passage, the White House estimated three-quarters of a million jobs had been “saved or created”—but millions more Americans were still losing jobs. Green road signs signaling ARRA-funded projects—the administration’s one attempt at stimulus vanity—became a political football as some governors eschewed them, likening the images to reelection advertisements for President Obama. Where signs did get posted, they likely didn’t have their intended effect: Most Americans were familiar with “the stimulus,” but the signs declared that the “American Recovery and Reinvestment Act” was “putting America to work”—and Americans didn’t know that was the stimulus’ government-given name.

“Stimulus” wouldn’t have been the right word, either. The term eventually became so toxic that Democrats stopped using it altogether. As the midterms approached, Obama, Biden, and their allies toured the country touting the “green shoots” of the recovery. That November, Democrats lost control of the House of Representatives.

Biden’s strategy this year, for the most part, seems to consist of laying low, allowing Trump’s approval ratings to slide as the former vice president gently reminds voters of his role in the Great Recession. These days, he talks about how “Barack” put him in charge of overseeing the stimulus during his online campaign events. Obama and Elizabeth Warren both praised Biden on that oversight in their respective endorsements. Implied in their praise is not only that voters remember the contours of the Great Recession’s recovery and Biden’s role in it—but they also remember feeling good about it. “You can bet your bottom dollar that we are going to be reminding people between now and November,” Democratic National Committee Chair Tom Perez told me last week.

The trouble is, voters probably don’t remember these things—and it didn’t even take a decade for them to forget. By August 2010, only a third of Americans knew that the Troubled Asset Relief Program—better known as the “bank bailout”— had been passed under George W. Bush, not Obama. A year later, another poll found that most Americans confused TARP with the stimulus itself. As the gap between the haves and have-nots has widened in the last decade, it’s hard to argue that the stimulus has risen in esteem. Bernie Sanders, after all, powered two presidential campaigns on variations of this theme: “In 2008, the American people bailed out Wall Street. It’s time for Wall Street to bail out the American people,” as he put it in his announcement to cancel all student debt.

“I think some of what we did is certainly more favorably viewed,” Jared Bernstein, who served as Biden’s chief economist at the time, told me recently. “But yeah—I would assume that the vast majority of people really don’t remember much about the Recovery Act at this point.”

Last week, Senate Minority Leader Chuck Schumer (D-N.Y.)  introduced the “No PR Act” to prevent the president from trying to sign his name to any future stimulus checks. Trump, meanwhile, came out against another round of stimulus checks, telling reporters that he prefers payroll tax cuts to additional stimulus checks, which had been his initial ask when the economy began to sour last month.

Is Trump trying to adopt more of Obama’s posture? For a man with such a taste for the ostentatious, surely not. But now that more Americans have been killed by the virus than in the Vietnam War, Trump might be learning that leaders cannot simply sell their way out of a crisis.