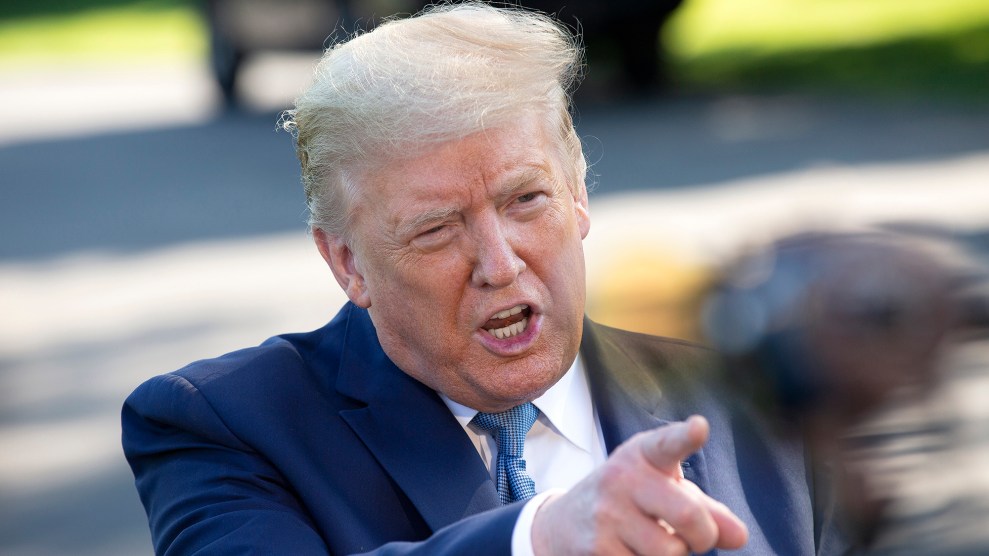 President Donald Trump speaks to members of the media as he departs the White House in Washington D.C., U.S., for Camp David on May 15, 2020. Stefani Reynolds/CNP via ZUMA

If you’re a Twitter user, by now you’ve probably seen the news. After years of complaints about President Donald Trump broadcasting falsehoods over the platform, the company finally took a small step to mitigate his misinformation. On Tuesday, the social media giant appended a “get the facts” link to two Trump tweets in which he claimed that mail-in-ballots would result in fraudulent election outcomes.

The link led to a page with several bullet points that refute the president—who, to be clear, was not telling the truth—along with links to reputable news stories providing context and correct information.

This moment was a long time coming, and however it ends, the president and his campaign have spent years preparing for such a stand-off. Since 2016, its has been clear that Trump benefited from an unregulated social media environment, where pro-Trump content that is untrue or incendiary—whether generated by Americans, Russians, or Macedonians—can circulate freely online. The 2016 elections also demonstrated how a completely unregulated social media ecosystem can be a threat to democracy. That year, sites like Facebook, Instagram (owned by Facebook), YouTube, and Twitter served as a gateway to voter suppression and misinformation that undermined the outcome. They could do so again this year. In battles over the the platforms’ role in breeding extremism, conservatives have taken up against efforts to reduce the presence of white nationalists, determining it was a net plus to their political efforts even if it polarized the country.

Since 2016, the social media companies have taken some steps to rein in the worst behavior on their services, including setting up guardrails specifically related to the disinformation around voting. Facebook banned false information and suppressive content on elections in ads. Twitter rolled out its election integrity policy in January. Meanwhile, Trump, his campaign, and Republican lawmakers have engaged in a campaign to keep those guardrails off. Part of this pressure campaign is backed by the threat of regulation. The Justice Department under Attorney General Bill Barr is overseeing anti-trust investigations into major social media companies, and Republican lawmakers claiming, without evidence, conservative censorship have proposed regulations.

But much of the pressure comes in the form of Trump’s public accusations—an open attempt to work the refs, rile his base, and keep social media companies constantly on defense. With Facebook, Google, and Twitter always battling his accusations of bias, it’s much harder for them to put in place and enforce policies, even if they are desperately needed for the broader health of democracy, that Trump and his allies believe will hurt their political fortunes. And if such policies are ever acted upon, as they were Tuesday, the claims of bias will resonate because Trump has already created a context in which his supporters believe social media is working against them. I wrote about this how this strategy has been deployed in my recent profile of Brad Parscale, Trump’s campaign manager:

But the campaign also gained by bending Facebook to Parscale’s will. An early example came in May 2016, after ex-Facebook employees told Gizmodo that co-workers had suppressed right-leaning content in the site’s trending topics section. A conservative chorus accused the company of discrimination until CEO Mark Zuckerberg and his deputy, Sheryl Sandberg, agreed to meet with a group that included an emissary from the Trump campaign. Facebook denied giving any preferential treatment and conducted an audit to prove it. But three months after the debacle, Facebook fired the contractors who vetted news promoted by the platform, replacing them with algorithms. According to a BuzzFeed News analysis, clicks and shares of fake news stories—most of which favored Trump—soon tripled. The campaign had accused Facebook of bias, and gotten just what it wanted…

From his perch leading Trump’s reelection effort, Parscale has continued and helped drive a larger full-court press by conservative media outlets and lawmakers pushing Facebook and other tech platforms to behave the way they want. In March 2018, shortly after his appointment as campaign chair, Parscale tweeted a warning: “Hey @facebook @Twitter @Google we are watching,” followed by the staring eyes emoji. “This is your opportunity to make sure the playing field is level.” The tweet preceded a barrage of attacks from the president, his campaign, and GOP officials alleging anticonservative bias in Silicon Valley.

It is in this context that Trump shot back at Twitter on Wednesday morning, accusing it and its fellow social media companies of bias—even seeming to throw in a reference to that 2016 Gizmodo story:

….happen again. Just like we can’t let large scale Mail-In Ballots take root in our Country. It would be a free for all on cheating, forgery and the theft of Ballots. Whoever cheated the most would win. Likewise, Social Media. Clean up your act, NOW!!!!

These tweets do exactly what the campaign has prepared to do in its battle with social media companies: Trump accuses them of bias, threatens regulation, and then goes ahead and repeats the false claim he was aiming to spread, in this case that voting by mail will delegitimize the election. He reminds Twitter of his power over the platform, then dares it to once again fact-check his false claim. How will Twitter respond?

We already know how the company and its peers have responded to this exact treatment over the last several years. Caught between civil rights pushing to get voter suppression and hate off the platforms and Trump and his crew on the right pushing to let repugnant content stay up, the platforms have largely catered to Trump’s concerns.

Twitter’s move suggests that specific disinformation about the process of voting may be a long-awaited exception to that trend. But, when it comes to shaping over policy at the platforms, Trump has many more wins than those who want his false statements and hateful content taken down. Facebook, for example, now allows politicians to lie in their posts and ads. On Tuesday, the Wall Street Journal reported that Facebook had internally determined that its algorithms increased polarization and radicalization but chose to do nothing, largely because of pressure from Republicans. And this Tuesday, the same day Twitter finally put its “get the facts” tag on Trump’s tweets, it refused to take down his tweets accusing the MSNBC host Joe Scarborough of involvement in the 2001 death of an employee. The president continued making the claim on Twitter on Wednesday.

Facebook, in particular, has repeatedly shown itself to be more interested in pleasing conservatives than cracking down on extremists using its platform. While the company’s own content policies ban hate groups, for example, just last week, a report by the Tech Transparency Project found 153 white supremacist groups’ pages on Facebook. (Many were removed after the report’s publication.) While the company has sought plaudits for its handling of misinformation around the coronavirus, such groups’ enduring presence demonstrate the company’s unwillingness to police other kinds of dangerous information on its platform.

With Trump reportedly growing more worried about his re-election prospects and Election Day in less than six months, his campaign is expected to unleash its war chest. That will include massive spending, particularly on Facebook, where he’ll seek to connect with his audience without filter by the platform. His attack on Twitter is just the latest chapter in a years-long campaign to work the refs to make sure the social media giants feel they have no other option.