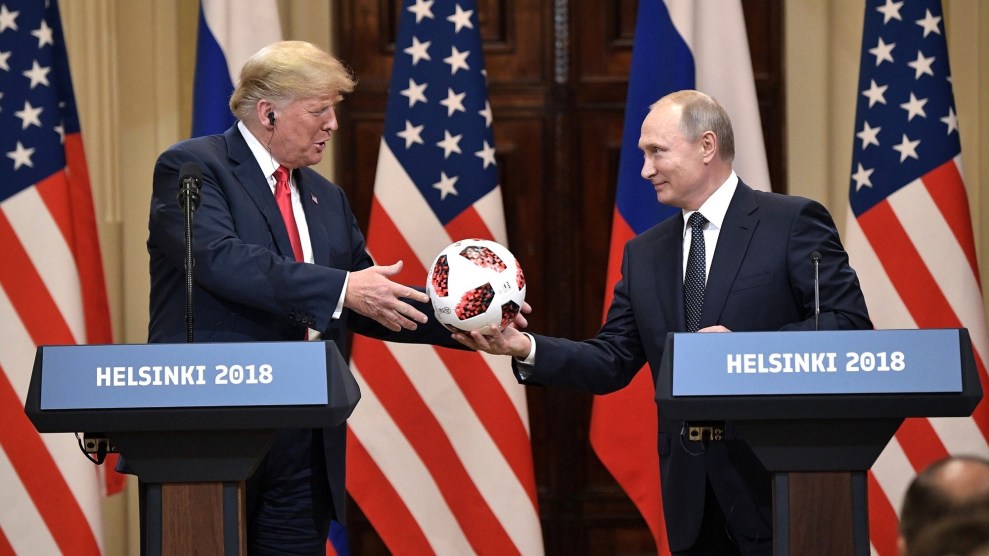 Top Democrats are accusing the Trump administration of hiding from the public evidence that the Russian government is once again interfering in the US election in an effort to help Donald Trump.

“Almost exactly four years ago, we first observed the Russians engaging in covert actions designed to influence the presidential race in favor of Donald Trump and to sow discord in the United States,” congressional Democrats said in a statement Friday. “Now, the Russians are once again trying to influence the election and divide Americans, and these efforts must be deterred, disrupted and exposed.”

This statement was issued by House Speaker Nancy Pelosi (D-Calif.), Senate Minority Leader Chuck Schumer (D-N.Y.), House Intelligence Committee Chair Adam Schiff (D-Calif.), and Senate Intelligence Committee Vice Chair Mark Warner (D-Va.). The same group on July 13 wrote FBI Director Christopher Wray to request the bureau give members of Congress a “defensive counterintelligence briefing” before August regarding foreign efforts to meddle in the upcoming election. “Congress appears to be the target of a concerted foreign interference campaign, which seeks to launder and amplify disinformation in order to influence congressional activity, public debate, and the presidential election in November,” the members wrote at the time.

Shorty after the July 13 letter was released publicly, former Vice President Joe Biden vowed that as president he would “impose substantial and lasting costs” on any foreign power that interferes with the election election.

Democrats aren’t saying exactly what they mean publicly, but it’s pretty clear. The New York Times reported Monday that the July 13 letter refers to concerns that “Russian-linked information is being funneled to a committee headed by Senator Ron Johnson, the Wisconsin Republican who is investigating Mr. Biden and his son, who was once paid as a board member of a Ukrainian energy company.” Johnson disputes allegations that he is relying on Russian disinformation.

Democrats’ statement on Friday came in response to an announcement by National Counterintelligence and Security Center Director William Evanina, which described foreign interference threats from Russia, China, and Iran.

Democrats said that statement “gives a false sense of equivalence to the actions of foreign adversaries by listing three countries of unequal intent, motivation and capability together.” They charged that Evanina’s statement leaves out information on Russia’s efforts that the public should hear.

“We can trust the American people with knowing what to do with the information they receive and making those decisions for themselves,” the Democrats said. “But they cannot do so if they are kept in the dark about what our adversaries are doing, and how they are doing it. When it comes to American elections, Americans must decide.”