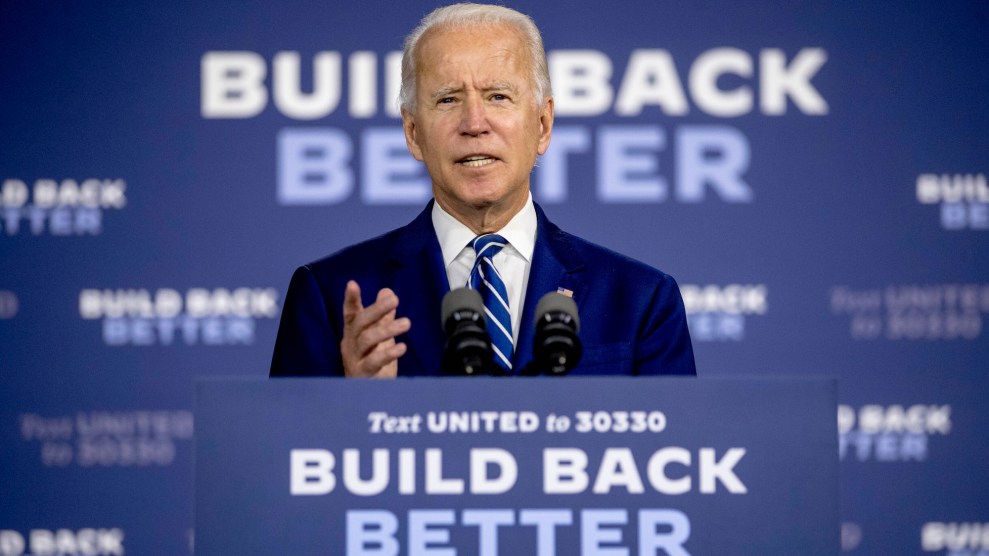 The Federal Reserve has a huge role to play in racial equality, but it has long perpetuated the income and wealth gaps between Black and white Americans. Joe Biden wants to change that.

Biden’s proposal, unveiled as part of his racial equity economic recovery plan, calls for the Federal Reserve to “aggressively enhance” the way it both measures and targets the racial job, wage, and wealth gaps, something the network of Federal Reserve banks have done only sporadically and without any formal mandate. Biden also wants the Fed to report on “data and trends in racial economic gaps” and the steps it is taking to close them, a move that would require an amendment to the Federal Reserve Act.

As the nation’s bank, the Federal Reserve’s key mandate is to influence the country’s money and credit supply in order to promote stable prices and employment. That role gets kicked into overdrive during recessions, and this pandemic-induced one we’re living in is no exception: The Federal Reserve has lately been buying up billions of dollars of corporate stocks and bonds to try to keep money flowing into the markets.

But how the Fed chooses to pump money into the economy has a tremendous effect on who benefits from it. The Fed’s policies are race-blind, but that’s part of the problem, leading to unequal outcomes across racial groups. Instead of buying up bonds from corporations, for example, the Fed could purchase them from distressed majority-minority communities, explains Mehrsa Baradaran, a wealth inequality expert and law professor at the University of California, Irvine. The current practice, Baradaran tells me, enriches some people at the expense of others. “This is not neutral monetary policy, and you have that recognition from the Biden campaign,” she says.

Liberal economists and scholars have argued that the Fed needs metrics for racial inequality since the Great Recession, but politicians didn’t acknowledgment that issue until recently—spurred in no small part by the wave of civil unrest that followed the police killings of George Floyd and Breonna Taylor. During a Senate Banking Committee hearing in June, Sen. Sherrod Brown (D-Ohio) asked Fed Chair Jerome Powell to commit to studying how Fed policy contributes to systemic racism. Powell only was willing to say he would “take that away and think about it.”

Biden’s racial equity-focused recovery plan, released Tuesday morning as the fourth pillar of his “Build Back Better” platform for rebuilding the economy in the wake of the pandemic, is largely a repackaging of campaign promises Biden has made since the former vice president ascended to the top of the ticket. It includes an immediate $10,000 cancellation in student loan debt during the coronavirus pandemic—a burden that disproportionately weighs on borrowers of color—as well as a $15,000 tax credit for first-time homebuyers and billions in funding for entrepreneurs of color. All of these initiatives take aim at the racial wealth gap: As of 2016, the net worth of a typical white family was 10 times that of the typical Black family.

So far, the campaign has resisted the bolder plans that Biden’s vanquished Democratic primary rivals put forward to address the racial wealth gap. Sens. Cory Booker (D-N.J.), Bernie Sanders (I-Vt.), and Elizabeth Warren (D-Mass.) all supported “baby bonds,” a proposal from economists William Darity and Darrick Hamilton that would give most Americans government-backed savings accounts at birth. A senior Biden aide said they “haven’t taken it off the table” and are currently evaluating pilot programs to see if the idea delivers on its promise.

Biden has also not committed to reparations for descendants of formerly enslaved African Americans. A senior Biden aide told reporters that the former vice president “doesn’t have a problem with the study” for the need for reparations proposed by Rep. Sheila Jackson-Lee (D-Tex.), “but he believes there are things we can do right now that we don’t have to wait on a study to tell us that will change the lives of Black and brown people in America.”