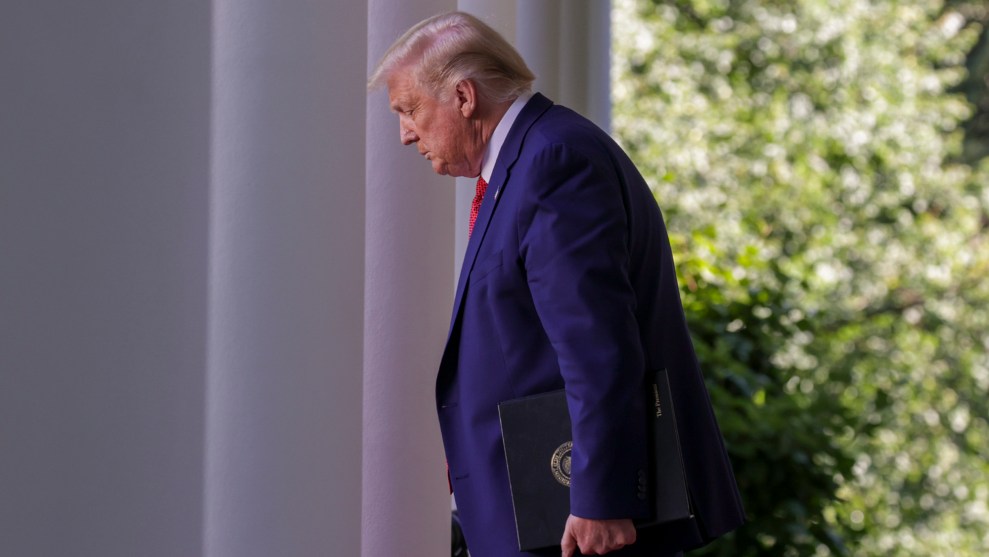 President Donald Trump walks to the Rose Garden for a press conference at the White House on July 14, 2020. Tasos Katopodis/CNP via ZUMA

President Trump blazed into Sunday with a strong assessment of his campaign’s standing, just 100 days until November 3.

The Trump Campaign has more ENTHUSIASM, according to many, than any campaign in the history of our great Country – Even more than 2016. Biden has NONE! The Silent Majority will speak on NOVEMBER THIRD!!! Fake Suppression Polls & Fake News will not save the Radical Left.

In this alternate reality, Trump is on track for a second victory. But on Earth One, things look very different.

National polls in recent months have given former Vice President Joe Biden a steady lead. In the last week, Biden has led by between 2 and 10 points, with most giving him a lead in the upper single digits. Hillary Clinton won the popular vote in 2016 by 2 points. But Clinton is not president because the Electoral College (a white supremacist institution) picks the president. But Trump is currently underwater in crucial swing states that he won in 2016, including Michigan, Wisconsin, Pennsylvania, and Florida.

Donald Trump won in 2016 when traditionally blue states in the Rust Belt—Wisconsin, Michigan, and Pennsylvania—turned red. This year, political realignments threaten Trump’s ability to repeat that victory. On Sunday, an NBC News/Marist poll shows Democrat Joe Biden leading Trump by five points in Arizona, a state that has gone for a Democrat only twice since 1948. There are two reasons why it might be posed to go a third time: According to the poll, voters in Arizona, a Coronavirus hot spot, trust Biden to handle the pandemic over Trump. And as federal agents are dispatched to foment conflict on the streets of American cities as part of Trump’s law-and-order campaign theme, Arizona voters said they trust Biden on race relations over Trump by a 20-point margin.

There was some qualified good news for Trump, but also news that exhibited his weakness in this moment. A higher number of Trump’s supporters in Arizona were enthusiastic about him at 74 percent compared to Biden’s 61 percent. Enthusiasm will provide insight into who shows up to vote, including during difficult situations like a pandemic. But it also shows the limits of the Trump campaign, which has catered to its base at the exclusion of appealing to a broader number of Americans. When Trump brags about the enthusiasm of his supporters, he is bragging about the faithful in a shrinking pool.

Trump also received higher marks on the economy than Biden in Arizona. But if states are shutdown by coronavirus, the economy may not be the first order concern that it generally is during presidential elections. And the longer the economy sputters, the more Trump risks losing the public’s confidence in his economic abilities.

The Arizona poll isn’t the only bad news for the president at the 100 day mark. Its representative of a larger trend. CNN released a poll Sunday showing Biden ahead in Arizona as well as Florida and Michigan.

Florida, another state being ravaged by the pandemic, is a critical swing state and Trump has virtually no path to victory without it. In all three states, CNN found that Trump’s low numbers are the result of a lack of support from women. But Trump is certainly struggling with another problem that may prove decisive in November: a loss of support among seniors. A key constituency for Trump in 2016, this cohort has moved away from the president as he has failed to control a pandemic that threatens their lives most immediately.

But Trump does have some reason for optimism and his opponents for vigilance. Trump claims there is a “silent majority” that will reelect him. But the fear for Democrats is actually a silencing of the majority. Trump won four years ago with a minority of the popular vote, and the hurdles to voting are only growing during the pandemic. Mail-in ballots may be discarded at high rates, a shrinking number of polling locations and a lack of poll workers could result in long lines, as demonstrated by primaries. Election officials, low on resources, have just 100 days to carry out an election in a pandemic.

Political fortunes can change and polls may narrow, but as we pass the 100-day mark, Trump’s hopes for reelection increasingly rest on a majority of Americans having their will subverted once again.