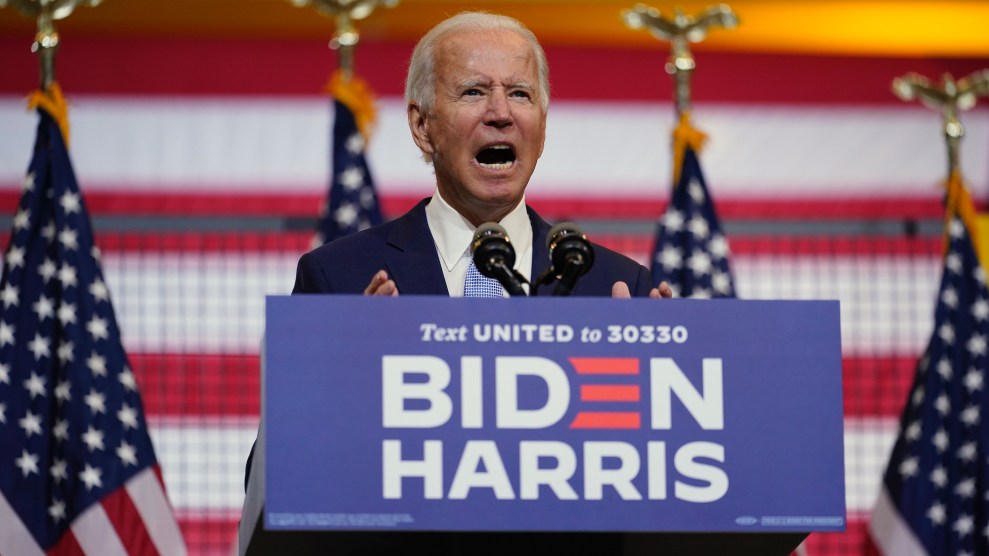 After another week of deadly violence across America, Joe Biden issued a stern warning to voters: Violence is facing Americans on all fronts, and President Donald Trump is squarely to blame for it.

Biden hammered that theme in a speech he gave in Pittsburgh Monday afternoon. “We need justice in America, and we need safety in America,” Biden said, naming the pandemic, its attendant recession, police violence, and white nationalism. “The common thread? An incumbent president who makes things worse, not better. An incumbent president who sows chaos rather than providing order.”

Biden’s speech was prompted by the police shooting of Jacob Blake, a 29-year-old unarmed Black man in Kenosha, Wisconsin, and the murders of two protestors by a white supremacist as they took to the streets to demonstrate against the officer’s actions. As the violence unfolded, Trump had been tweeting demands for law and order. Over the weekend, he credited the return to calm in Kenosha with his decision to send in the National Guard—though Wisconsin Gov. Tony Evers made the initial decision to call them in. All the while, Trump has mocked Biden and said that he’s soft on crime because “he can’t lose the Crazy Bernie Super Liberal Vote!”

Police violence and racial inequality took center stage for Biden’s attack on how the president’s rhetoric has made the country less safe. “Seven bullets in the back of Jacob Blake, a knee on the neck of George Floyd, the killing of Breonna Taylor—in her own apartment,” Biden said, listing the recent attacks that have spurred nationwide demands to the end of police brutality. But the former vice president also rebutted the president’s attacks. “Ask yourself: Do I look to you like a radical socialist with a soft spot for rioters?” he asked. “I want a safe America—safe from COVID, safe from crime and looting, safe from racially motivated violence, safe from bad cops.”

"This is a sitting president of the United States of America. He’s supposed to be protecting this country, but instead he’s rooting for chaos and violence. The simple truth is Donald Trump failed to protect America. So now he’s trying to scare America." — @JoeBiden pic.twitter.com/vJ1odJYwMm

“We need justice in America, and we need safety in America. The common thread? An incumbent president who makes things worse, not better.”

Trump adviser Kellyanne Conway said on Friday that nationwide discontent boosted Trump’s reelection prospects. “The more chaos and anarchy and vandalism reigns, the better it is for the very clear choice on who’s best on public safety and law and order,” she told Fox and Friends.

Biden has made the opposite bet, one that has fueled his campaign’s entire raison d’être. He premised his entrance into the Democratic presidential primary last April on the Trump’s response to the 2017 “Unite the Right” rally in Charlottesville, Virginia, where he said there had been “some very fine people on both sides” of the violence. He repeated that logic at the Democratic National Convention earlier this month, saying that Charlottesville had been his “call to action.” After a racially-motivated mass shooting in El Paso last August left 23 dead, Biden hit those notes during a speech in Iowa. But the former vice president, who was officially named as the Democratic presidential nominee earlier this month, hasn’t yet had the chance to draw this particular contrast with Trump, in real-time, with the spotlight of the general election upon him.

Last spring, Trump began to distance himself from his response to Charlottesville after Biden entered the race with that message. After Biden spoke today, Trump instead doubled down on his law-and-order rhetoric. “To me, he’s blaming the Police far more than he’s blaming the Rioters, Anarchists, Agitators, and Looters, which he could never blame or he would lose the Radical Left Bernie supports!” Trump tweeted after Biden’s remarks.