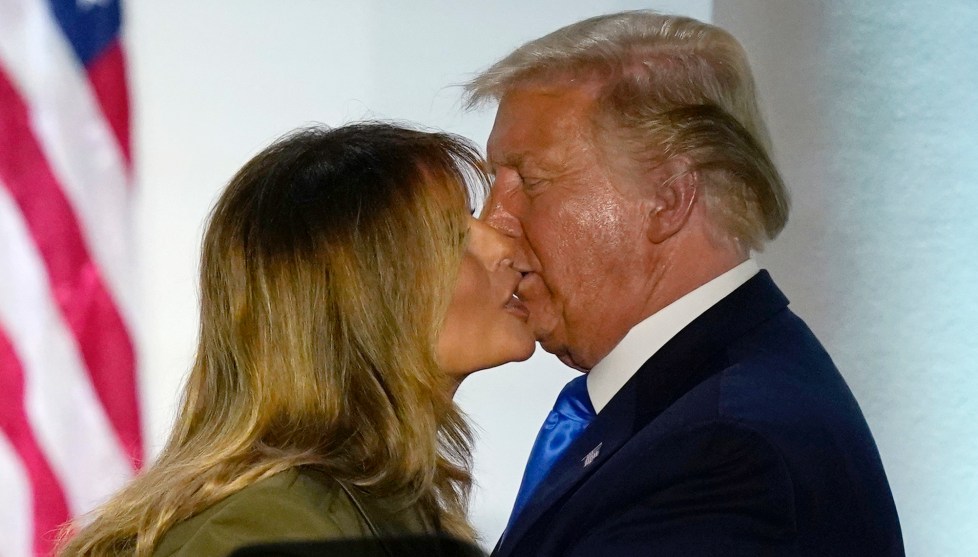 President Donald Trump and First Lady Melania Trump approximate a kiss after her speech on the second day of the Republican National Convention. AP Photo/Evan Vucci

Your nightly guide to racism at the Republican National Convention.

Long before racist birther Melania Trump made a plea for unity, the undercard of the RNC’s second night featured what can only be described as a parade of Good Ones. These were the good kinds of immigrants, the good kinds of Black and Brown folks, people living or at least aspiring to live clean, capitalist lives on the bright side of the American Dream. Donald Trump delivered a stunt pardon of a bank robber turned Christian prison reformer. He presided over an unspeakably cynical stunt naturalization ceremony. The message of all these various gimmicks was that “hard work and determination” plus chance opportunities plus the beneficence of beaming white saviors can shape and shift the lives of the lower orders for the better.

We don’t have to enumerate all the ways the administration has in fact worked to block the various pathways to success that speakers were touting all night. The actual problems facing Black and Brown people in America were entirely beside the point anyway. Tuesday night was aimed at the wobbly moderates in the GOP’s camp who would like the loud part made quiet again.

This was the same Abby Johnson, by the way, who said recently it would be “smart” for cops to racially profile her biracial son.

I think often about my ancestors who struggled for freedom, And as I think of those giants and their broad shoulders, I also think about Joe Biden, who says, “If you aren’t voting for me, you ain’t Black”; who argued that Republicans would put us “back in chains”; who says there is no “diversity” of thought in the Black community. Mr. Vice President, look at me. I am Black. We are not all the same, sir.

Cameron, the state’s first top Black prosecutor, is in a good position to know that there are some aspects of the American experience that are shared across the Black population. He’s the guy overseeing the investigation into the cops who killed Breonna Taylor.

—Eric Trump marveling at how the “silent majority had no one fighting for them in either party” until his father came along. He went on to repeat the line that “radical Democrats” ruined America. But for whom?

In the view of the radical Democrats, America is a source of the world’s problems. As a result, they believe the only path forward is to erase history and forget the past. They want to destroy the monuments of our forefathers. They want to disrespect our flag, burn the stars and stripes that represent patriotism and the American dream. They want to disrespect our National Anthem by taking a knee while our armed forces lay down their lives every day to protect our freedom. They do not want the Pledge of Allegiance in our schools. Many of them don’t want one nation under God. The Democrats want to defund and disrespect our law enforcement. The Democrats want an America where your thoughts and opinions are censored when they do not align with their own.

—Acting Homeland Security Chad Wolf, himself a sort of stunt appointee, leading the stunt naturalization ceremony beside the president at the White House and trampling the Hatch Act in the process. It was a gross, exploitative spectacle, suffused with the idea that there are good immigrants and bad immigrants.

Acting DHS Secretary Chad Wolf presides over a naturalization ceremony at the White House during the RNC. His appearance is an apparent violation of the Hatch Act, which prohibits federal employees from performing political activities on duty https://t.co/tz1YGPbJoz pic.twitter.com/N0oLsprTZM

“It sickened me to my core to watch that spectacle given every directive this administration has taken from day one to demonize immigrant communities, including naturalized ones.”

so chad wolf, who is illegally performing the duties of DHS head, broke the law by conducting a naturalization ceremony as part of a partisan event at the White House. do i have that right?

RNC is showing a naturalization ceremony conducted at the White House. Left unsaid:
-Trump has brought legal and illegal immigration to a near standstill.
-Trump separated hundreds of immigrant kids from their families.
-Trump continues push for the wall to keep immigrants out.

This is un f’n believable. The most anti-immigrant President in history staging a naturalization ceremony in the WH, with military in uniform, FOR A POLITICAL CONVENTION. infuriating.

—Melania Trump framing her family’s immigration story as the prototypical one, ignoring the stark differences between their tale and the plight of many, many others under her husband’s administration. The First Lady pleaded for a stop to “the violence and looting being done in the name of justice,” and she asked that we instead focus on the future.

Like all of you, I have reflected on the racial unrest in our country it is a harsh reality that we are not proud of parts of our history. I encourage people to focus on our future while still learning from our past. You must remember that today we are all one community, comprised of many races, religions, and ethnicities. Our diverse and storied history is what makes our country strong, and yes, we still have so much to learn from one another.

With that in mind, I would like to call on the citizens of this country to take a moment, pause, and look at things from all perspectives. I urge people to come together in a civil manner so we can work and live up to our standard American ideals.

I also ask people to stop the violence and looting being done in the name of justice. And never make assumptions based on the color of a person’s skin. Instead of tearing things down, let’s reflect on our mistakes. Be proud of our evolution and look to a way forward. Every day, let us remember that we are one nation under God and we need to cherish one another.

She closed her speech in front of a crowded White House lawn, in defiance of social-distancing guidelines, with a message to voters conveyed under the guise of not playing politics.

We all know Donald Trump makes no secret about how he feels about things. Whether you like it or not, you always know what he’s thinking. And that is because he is a person who loves this country and its people and wants to continue to make it better. Donald wants to keep your family safe, he wants to help your family succeed. He wants nothing more than for the country to prosper and he doesn’t waste time playing politics.

What sort of family do you suppose she has in mind? Does it look like mine? Or does it look more like, say, the McCloskeys?

So how badly did they want to say the n-word tonight? Although this motley crew of speakers couldn’t hit the high notes the McCloskeys did on Monday, the naturalization stunt alone merits 8 out of 10 Atwaters.