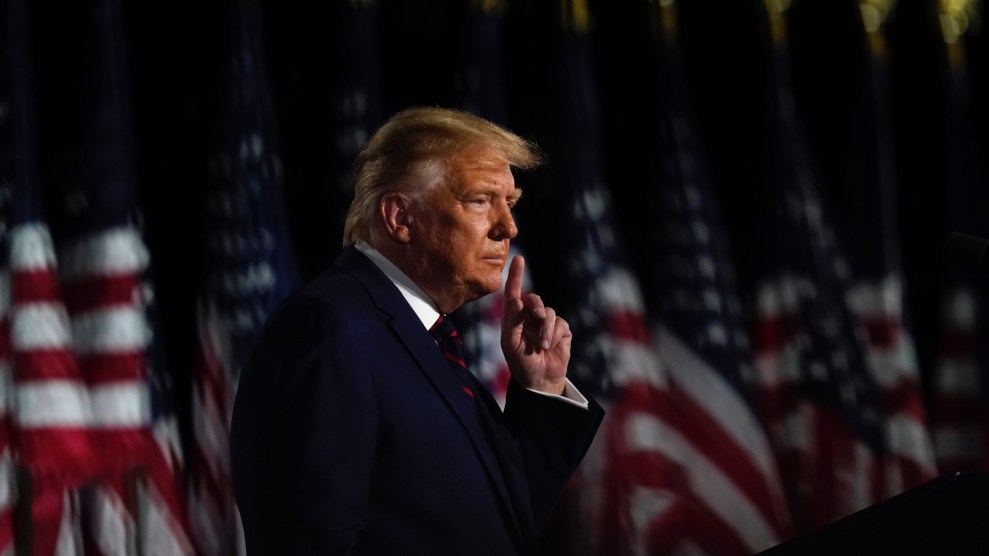 The president marked the conclusion of the RNC by giving a classic Donald Trump speech. It was too long and riddled with lies, and it caused whiplash for anyone trying to figure out what the message actually was. Afterward, people puzzled over its contradictions—is Joe Biden too tough on crime or not tough enough?—but as with all Trump speeches this one was coherent in the way that matters most to the president and his audience. It was, in ways both subtle and unsubtle, a promise to preserve America’s racial hierarchy.

The Republican Party didn’t even bother coming up with a party platform this time around, and Trump has shown no signs that he plans on actually championing policy in his second term. The party’s aimlessness was well-captured by a convention that couldn’t figure out how to attack Biden or even come up with a new slogan, settling on “Make America Great Again…Again.” But who needs any of that stuff when you can rally white people around whiteness?

It’s rote by now to call Donald Trump a racist. You can look to his past, when he was busy denying housing for Black people or when he championed the racist lie that Barack Obama, the first Black president, was secretly born in Kenya and thus ineligible for the presidency. Or you can look at his presidency, which he began by demonizing immigrants and implementing a Muslim ban, telling four representatives of color to “go back” to their countries, and threatening racial justice protesters with violence.

So it came as absolutely no surprise that Trump spent long stretches of his big finale on Thursday winking to the racists among us. He presented the election as a choice between him and a candidate who supports violent criminals and anarchists hell-bent on destroying America.

"Your vote will decide whether we protect law abiding Americans, or whether we give free rein to violent anarchists, agitators, and criminals who threaten our citizens."

Trump has been admonishing protesters since widespread demonstrations erupted in the wake of the police killing of George Floyd, a 46-year-old Minneapolis Black man. Protests in Kenosha, Wisconsin, are ongoing after Rusten Sheskey, a white police officer, fired seven shots into 29-year-old Jacob Blake’s back. It was in Kenosha that Kyle Rittenhouse, a 17-year-old white guy from Illinois, killed two protesters—an act of vigilantism that went unmentioned by Trump.

But the president did take time to heap tons of praise on police officers, going as far as to say that if police officers were “allowed to do their job, you’d have no crime in New York.” Interpreting generously, one might conclude he meant mass arrests, which is bad enough. But given the larger context of police violence around the country, it’s likely Trump had other things in mind. “We have to give law enforcement, our police, back their power,” he said. It wasn’t order he was promising. It was control. He riffed about sending federal troops into cities that need help, saying the problem would be taken care within a few hours.

Trump also attacked Democrats for wanting to abolish cash bail, a move he claims would release “criminals” into “your” neighborhoods. It was telling whom he decided to name: Biden, of course; Bernie Sanders, that “wild-eyed” Marxist; and Rep. Ilhan Omar (D-Minn.), a Black Muslim woman. Maybe it was his odd, overenunciated style of speaking, but the way he said Omar’s name was venomous. Ilhan Omar, he said, like the name of a demon to be avoided at all costs, as opposed to a sitting member of Congress.

.@realDonaldTrump: "When Congresswoman Ilhan Omar called the Minneapolis police department a cancer that is 'rotten to the root,' Biden wouldn't disavow her support and reject her endorsement – he proudly displayed it shortly and later on his website." #RNCConvention

And where might all these criminals go after being set loose? To the suburbs—not the suburbs as they actually are, increasingly Black and Brown, but the suburbs as he imagines them, lily-white enclaves forever frozen in 1953. For the last few weeks he’s been claiming that Joe Biden wants to abolish the suburbs and that Cory Booker is going to let Black people invade your neighborhoods, to which horrors he added on Thursday the specter of Democrats coming for your guns. “If we don’t win your Second Amendment doesn’t stand a chance,” he said. How will you shoot Black people then, he all but asked.

If half the speech was dedicated to providing fuel for the fever dreams of white vigilantes, the other half seemed to make overtures to Black voters in a last-ditch attempt to siphon voters from the Democratic base. “I have done more for the African American community than any president since Abraham Lincoln,” the president said. It’s not the first time he’s made this proclamation and God knows it won’t be the last.

"And I say very modestly I have done more for the African-American community than any president since Abraham Lincoln, our first Republican president." – Trump

The line earned a round of rousing applause from the mostly white crowd, and as the broadcast cut away to all the grinning white faces it became clear what was really going on. These weren’t overtures so much as reminders—like his stunt naturalization ceremony on Day 2 of the RNC—of who exists in America on the sufferance of whom.

Trump has spent the last four years like a man perpetually on the cusp of dropping the n-word. He’s done absolutely nothing to slow the spread of a virus that’s disproportionately killing Black and Brown people, and when peaceful protesters gathered in front of the White House to demand racial progress, he gassed them so he could take an awkward photo in front of a church.

Tonight, he spent more than an hour embracing white supremacy, and then he turned around and declared his support for Black people. Trump never seems more racist than when he’s offering assurances of how not racist he is. He was the slave master in these moments, trying to inveigle the house slaves into going outside and telling the field slaves that things will be different this time.