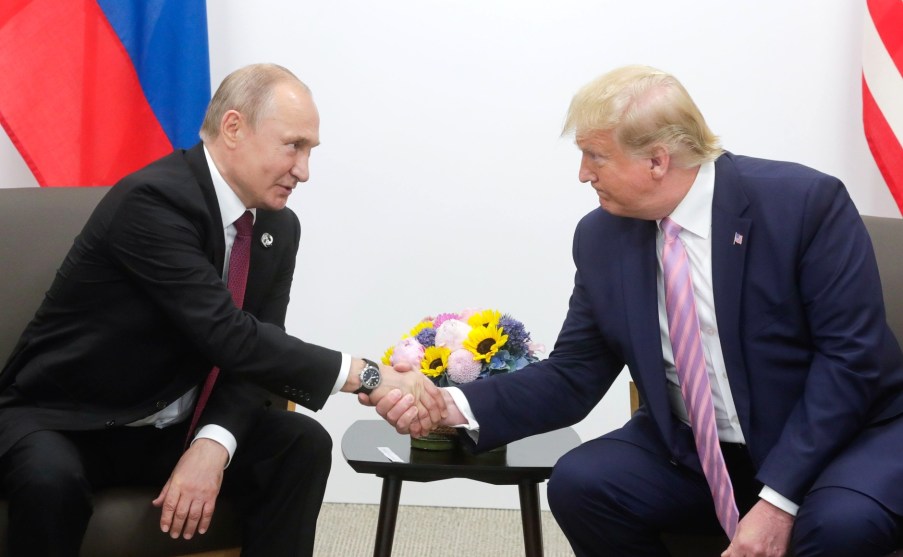 The Senate Intelligence Committee released its fifth and final volume in its years long counterintelligence investigation on Tuesday, offering new detail and reporting on connections between President Donald Trump’s 2016 campaign and the Russian hack-and-leak operation aimed at Hillary Clinton. But several of the Democratic members of the committee, most notably Sen. Ron Wyden of Oregon, say the report blocks the American public from a key piece information: what the Russians are doing right now to intervene in the 2020 election to help Trump.

“The…report includes a wealth of extremely troubling new revelations about the counterintelligence threat posed by Donald Trump and his campaign,” Wyden said in a standalone statement included at the end of the report. However, Wyden added, a lot of the new information “remains needlessly classified” in the report, including “redacted information that is directly relevant to Russia’s interference in the 2020 election.”

Wyden, who has developed a reputation for presciently and publicly flagging major intelligence issues without revealing classified information, was backed up in another statement attached to the report he co-authored with Democratic Sens. Martin Heinrich, Dianne Feinstein, Kamala Harris, and Michael Bennet. The group noted that the value of the committee’s extensive investigation “is not purely historical,” not only because the lessons of Russia’s interference remain valuable, but also because—and as Trump’s own intelligence officials assert—”Russia is actively interfering again in the 2020 US election to assist Donald Trump, and some of the President’s associates are amplifying those efforts.”

While the US intelligence community and law enforcement officials—some of whom have access to some of the redacted information—repeatedly say they’ve learned the lessons of 2016, the vast majority of that information will remain hidden not only to citizens, but to state and local election officials who are on the frontline of defense against what the US government says are active influence and interference operations being carried out by some of the world’s most sophisticated intelligence agencies.

Republican Senators James Risch, Marco Rubio, Roy Blunt, Tom Cotton, John Cornyn, and Ben Sasse offered their own statement, claiming the report shows “no evidence” that the Trump campaign colluded with the Russian government. That claim runs contrary to the findings laid out in the first pages of the report stating that Paul Manafort, Trump’s campaign chairman who is now in prison, had active connections with Russian intelligence officers while running the campaign and up into 2018.

According to Wyden’s statement, the report’s redactions give cover for the Republican senators to make such claims. As an example, he cited redactions that block the public from knowing exactly what the committee found with respect to Manafort’s connections with Konstantin Kilimnik, a Russian intelligence officer, including indications that Manafort himself was “connected to Russia’s hack-and-leak operations.” He also notes that the committee’s findings about the role of Russian disinformation in the attempts to tie Vice President Joe Biden to corruption in Ukraine—and ultimately the source of Trump’s impeachment in January of this year—are similarly hidden behind redactions.

That could be a boon to Trump and his allies, who have continued to seek to tarnish Biden with the material in hopes of defeating him in November. “Only when the American people are informed about the role of an adversary in concocting and disseminating disinformation can they make democratic choices free of foreign interference,” Wyden warned.