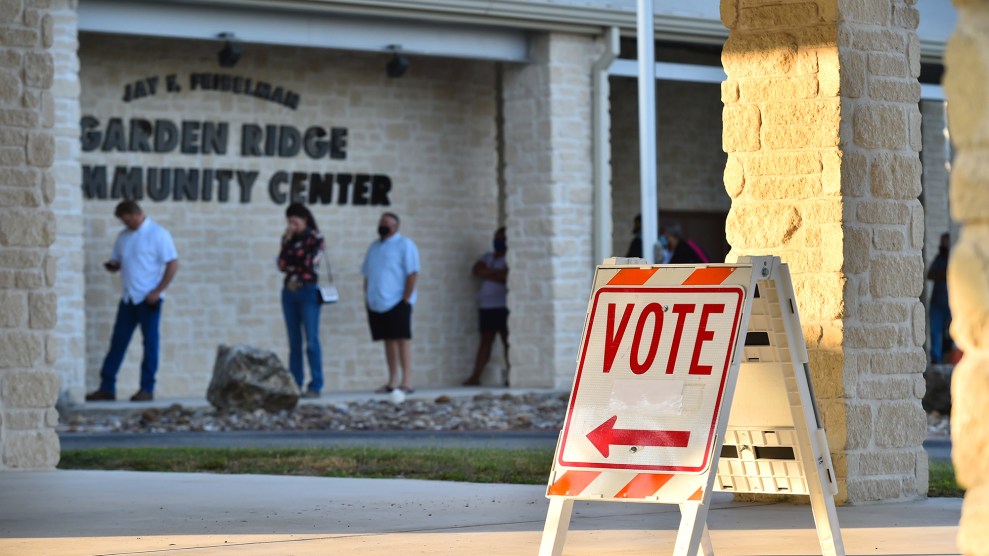 By Friday the question in Texas wasn’t whether the state would surpass its overall turnout in 2016—it already had—but by just how much. In the end, Texas blew past its previous record, in the words of Texas Tribune CEO Evan Smith, “by the population of Vermont.” That’s a very Texas kind boast, but in this case, the boasting is warranted. For years, the state has ranked near the bottom of the nation in turnout percentage, and Democrats who have toiled to change the state’s political culture have preferred to call it a “non-voting state” rather than a red state.

There was no one way this happened. The state has become ever more competitive over the last three election cycles and, put simply, there’s just a lot more to turn out for: A dozen US House seats are conceivably in play; the lower chamber of the Texas legislature is in the balance; former Vice President Joe Biden and President Donald Trump are locked in a close race; and so on. But the change in voting behavior is also a function of policy. In a state with a long history of voter suppression, Democrats have begun to consolidate power in large counties in ways that work to counteract that legacy.

Consider the trajectory of Harris County, which includes Houston and has more registered voters (by quite a bit more than a Vermont) than any other county. When I visited Houston in early 2017, Democrats were still taking stock of their surge in support—from a margin of a few thousand votes in 2012, to a margin of a few hundred thousand votes the previous fall:

Those gains may beget more gains, the theory goes, not just because nonvoters have now joined the democratic process, or because they are now electing officials who speak their language or look like them, but because voting is simply easier in Texas when Democrats are in power.

In previous years, the Republican-run office of the tax assessor for Harris (a county of 4.5 million people) refused to prioritize registering voters and even testified against a proposal to move registration online. And though Texas high schools are required to hold voter registrations on campus at least twice a year, some Houston public schools declined to follow that policy. The new superintendent and the Democratic tax assessor plan to co­ordinate registration drives in every high school in Houston, and the assessor’s office has turned into a community organizing hub. In April, it hired a new staffer to work full time on registration drives. His previous job? Organizing the county for Battleground Texas.

Putting a voting rights advocate in the tax assessor office was a significant development. But the county’s elections were still run by the county clerk, Stan Stannart (real name), a caricature of an early 21st-century Texas Republican flunky, who believed George Soros was trying to take over the county and whose management of the voting process frequently resulted in long lines and shuttered polling locations. Stannart was swept away, along with seemingly every other Republican officeholder in the county, in the 2018 downballot wave. The current Democratic clerk, Chris Hollins, has very explicitly made the goal of his office to maximize turnout—since early voting began, the county clerk’s Twitter account has had the feel of a high school country coach, cheering on his runners and shouting out splits. Harris County allowed voters to cast their ballots from their cars at 10 locations. And in the final two days of early voting, Hollins’ office kept the polls open for 36 hours straight.

Such an effort is impossible, though, without adequate funding. And that was another consequence of the 2018 wave. For years, the county’s chief executive—known somewhat confusingly as county judge—was a Republican named Ed Emmett. A well-respected moderate, Emmett was routinely re-elected with sizable Democratic support. But he was narrowly defeated by a 27-year-old Democrat named Lina Hidalgo, thanks in no small part to straight-ticket voting—with one of the longest ballots in the nation, voters simply checked the Democratic box at the top rather than pick and choose downballot. (That was the last Texas election with such an option—Republicans passed a law to eliminate it.)

After Hidalgo’s victory, the Houston Chronicle editorial board chided voters for letting their partisanship get the best of them. But Hidalgo has governed with purpose, taking aggressive steps to combat the spread of coronavirus in the county and making voting access a top priority. As NBC News reported, the county commissioners court, on which Hidalgo sits, voted to spend $31 million to administer elections this year—up from just $4 million in 2016.

Harris County is a lesson that voting doesn’t have to be as hard as it’s been. And the response by Republicans in the state and county has been to remind voters that it isn’t always this easy, either. As the Texas Tribune reported, “Republican activists, party officials and state leaders have voted against local initiatives, sought injunctions and filed multiple lawsuits to halt the unprecedented effort in Harris County.” Most notably, Republicans sued the county to block curbside voting—even seeking to throw out 100,000 votes that have already been cast. Such efforts, Hidalgo told my colleague, Ari Berman, have backfired, serving as a motivating force for voters in the county to show up.

The fact that lots of people have voted anyway does not negate the existence of voter suppression. It’s still harder than it should be to register voters in Texas; there are voter ID requirements that are onerous for some; the state didn’t expand mail-in voting during a pandemic and Gov. Greg Abbott limited the number of locations absentee voters can drop off their ballots; and there is a state attorney general desperate to make an example of the slightest mistake. But right now Democrats have power, and they’re using it.