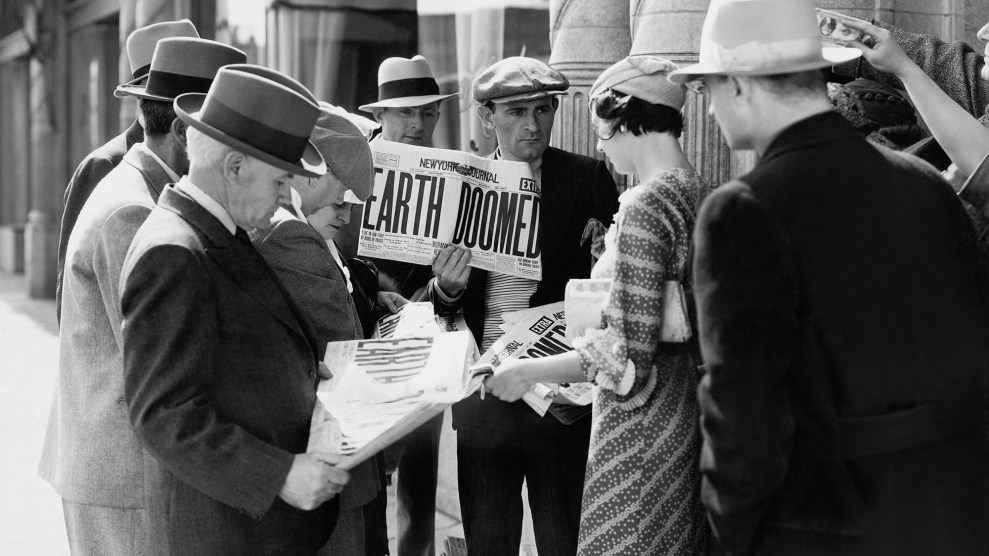 Donald Trump has the coronavirus and as I was sitting down to write this, news broke that he is being moved to Walter Reed from the White House. I don’t really have much to add about this. It’s all so surreal. The president who downplayed the viral illness destroying his country and killing its citizens gets infected with said disease. We long ago left The West Wing territory and are now on the verge of entering Scandal territory.

I hope he gets better. The coronavirus is awful and I hope he makes it out okay, despite my misgivings about his presidency and him as a person. My other hope is this: I hope the supporters of his who have refused to heed the dire warnings of scientists and medical professionals worldwide are shook by this. I hope they have a “come to Jesus” moment.

Monika Bauerlein, our CEO, and David Corn, our Washington bureau chief, have much better thoughts that are far more interesting than that, and you should read both their posts. But I’ll ramble a bit more first.

There’s a scene in the David Rabe play Hurlyburly (which I’m now going to describe from memory because I can’t find a free copy of the script, so these quotes are probably not 100 percent accurate) where the main character has had a total meltdown, driven mad by drugs, loneliness, and cable news. He is rambling to himself when suddenly another character shows up and the main character tries to explain his conundrum.

“I don’t know what pertains to me and what doesn’t.”

“But there is death and destruction in the word! Axe murderers and plane crashes! How am I supposed to feel about that?”

“I don’t know,” she says. “But I was just saying that they all pertain to you.”

I’ve thought about that scene a bunch this year when we can all feel like that main character. I don’t have an answer. David Rabe didn’t either when he wrote the play. And that’s okay. There’s a famous Catholic quote that comes to mind: “I believe that the desire to please you,” the monk Thomas Merton prayed, “does in fact please you.”

Sometimes you can’t answer something, but the fact that you want to answer it is an answer in and of itself.