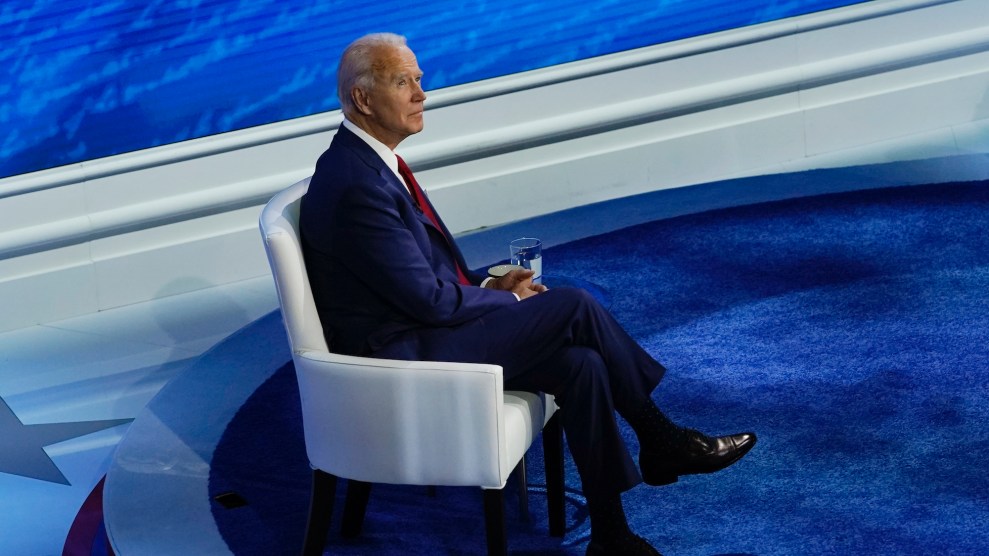 Joe Biden at his town hall with ABC News in Philadelphia on October 15, 2020.Carolyn Kaster/AP

Election Day is still two weeks away, but progressives are already ramping up their efforts to influence who gets to serve in a potential Biden administration. In a new letter sent to the Biden transition team, a coalition of lefty organizations are demanding that the new administration be free of corporate influence and that it commit to a minimum diversity goal for its appointees.

The letter, spearheaded by the American Economic Liberties Project, a group that fights against monopolies and corporate power, urges the Biden transition co-chairs to appoint women, people of color, and members of underrepresented communities to least half of all positions. It also calls for all appointees to be free of corporate or lobbying ties.

“First, you should build upon President Obama’s efforts to strengthen the diversity of the federal workforce,” the letter says. “Second, you should appoint only individuals who have a strong track record of standing up to corporate power and whose commitment to public service is unimpeachable.”

The 37 cosigning organizations span the progressive movement; all of them have made targeting corporate power a key plank of their mission. They include racial justice-oriented organizations like the Center for Popular Democracy and the Working Families Party; anti-Wall Street groups like Americans for Financial Reform; and climate groups like the Sunrise Movement.

These demands, the letter states, are based on the stakes of this moment, in which a global pandemic and its economic consequences have demonstrated the financial insecurity faced by Americans, particularly those of color. “Individuals in a future Biden administration must also have the ability to understand and overcome the traditional, pro-corporate and pro-Wall Street ideological constraints on many policymakers’ imaginations that are partly to blame for today’s crisis of concentrated corporate power,” it says.

Diversity among White House personnel increased sharply after the country elected its first Black president. As the letter notes, Obama presided over an executive branch that, for the first time in history, had appointed women and members of underrepresented groups to a majority of top posts. Hillary Clinton, had she won, had committed to a female-majority cabinet. But progressives have had less success in pushing the party to keep Wall Street allies out of Democratic administrations. They blame Obama’s bank-friendly appointees to the administration’s top economic posts for orchestrating a lackluster response to the 2008 financial crisis.

Specifically, the letter asks that the transition team not consider “policymakers who have held senior roles in the industries they will be tasked with regulating; who have worked as corporate lobbyists, whether registered or not; who have used public service for personal gain; or who have otherwise, through their affiliations or sympathies with abusive or extractive institutions and corporations, promoted interests at odds with the well-being of workers, consumers, people of color, the environment, small businesses, and communities as a whole.”

“Individuals with experience leading small and independent businesses should be welcomed into any administration,” the letter says, but “those who have chosen to advance the interests of abusive or extractive firms like Amazon, Facebook, and Blackstone should not.”

Though Democrats have made a strong show of unity in the final weeks of the presidential campaign, the letter addresses a long-simmering intraparty fight. Last week, a group of left-wing House members, including Reps. Alexandria Ocasio-Cortez (D-N.Y.) and Katie Porter (D-Calif.), joined 39 progressive groups in a letter asking that no C-suite-level corporate executives or corporate lobbyists hold Senate-confirmed posts in a Biden administration. A coalition of youth-oriented progressive organizations composed an open memo to the Biden campaign in April that similarly demanded the former VP appoint “zero current or former Wall Street executives or corporate lobbyists” to his transition team, advisory positions, or cabinet.

Other factions within the party—including some Black Democrats in Congress and on K Street—have argued that the left’s demands could end up hurting diversity by excluding some experienced people of color from serving in the administration. Despite the diversity gains under Obama, just 10 Black political appointees have served in federal financial regulatory roles, according to a recent study from the Brookings Institution. Rep. Gregory Meeks (D-N.Y.) told Politico last month that a number of Black individuals who were considered for financial policy roles in a potential Clinton administration four years ago would have been disqualified under the standards progressives have laid out this time around. Critics of the left’s approach have said that it’s tone-deaf to the career paths often taken by those for whom a corporate or lobbying gig might make them the first in their family to hold a lucrative job and accrue wealth.

This new letter seeks to address this concern head-on. “It’s a notion we reject,” says Morgan Harper, a senior adviser to the American Economic Liberties Project. “There are people who represent the interests of this country who reflect its diversity and are independent from corporate interests. Corporate interests are already overrepresented at this very important point of rebuilding the economy.”

To achieve their goals, the cosigners urge the Biden transition team to “make a concerted effort to look outside the beltway for individuals whose experiences will bring unique perspectives and skills to federal service.” They add: “While all appointees must have experience that qualifies them for the positions they hold, non-traditional experience or credentials should be considered to expand the pool of possible candidates.”

The Biden campaign’s plan for racial equity includes a promise to “promote diverse leadership for all federal agencies.” Ted Kaufman, a transition co-chair and longtime Biden aide, told Politico that the transition’s task amounted to “getting seasoned people that are really qualified to do the job,” adding that the team would look for potential appointees who have “experience,” “are smart as hell,” and “reflect America.”

“A lot of this isn’t about ideology or anything else,” he said. “It’s totally about what do you do with the incredible hollowing out that Trump has done.”