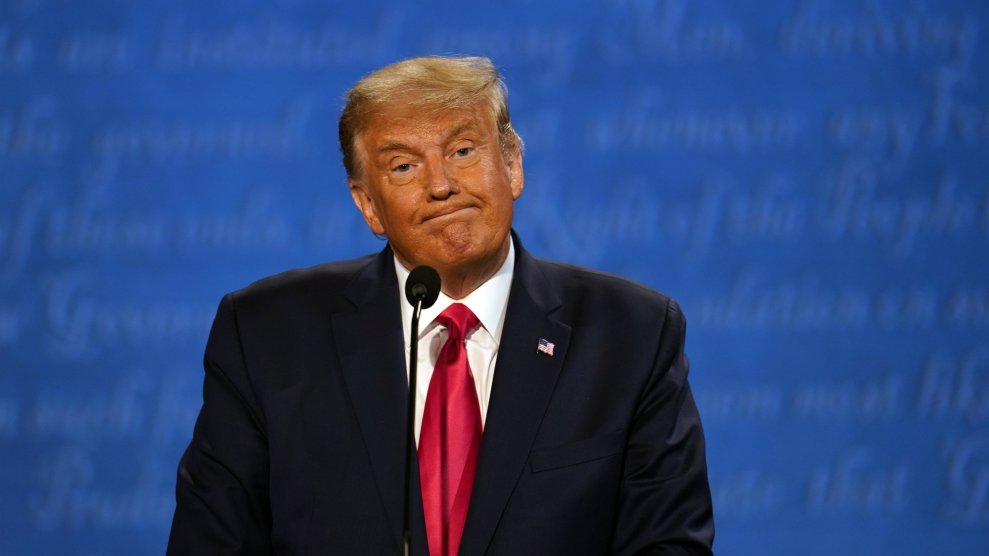 The second and final presidential debate Thursday night featured some changes that were supposed to make tonight’s event less chaotic than the first shoutfest was. And even though there was less interrupting from the two candidates, the segment on race still managed to be a mess.

NBC’s Kristen Welker opened up the race portion of the debate with a pointed question for Trump and former vice president Joe Biden. “Do you understand why Black parents give their children ‘The Talk?'” Welker asked referring to the necessary conversation Black parents have with their children about the dangers of racism. In fact, “The Talk” is more of a series of talks. I remember a lot of mine vividly. Don’t wear a hat in the car at night if you’re with a group of Black people. Keep your hands out of your pockets. Always refer to police officers in polite terms.

Biden responded with a story about his daughter Naomi Biden, who is a social worker, and someone he didn’t have to warn about being racially profiled at a traffic stop. Unlike most Black parents who, regardless of their circumstances, must have that conversation.

Trump, unsurprisingly, appeared to know nothing about The Talk at all. On cue, when the conversation turned to race, Trump’s old talking points were at the ready—and nearly all of them focused on crime. “He’s been in government for 47 years and never done a thing, except for the Crime Bill,” Trump said referring to the massive legislation championed in 1994 when Biden was a senator that, among other things, created mandatory minimum sentences for certain drug crimes and expanded the federal death penalty. “Nobody has done more Black Americans than Donald Trump,” the president added. (Just for the record, when my parents gave me The Talk, neither Biden’s Senate career nor Donald Trump ever came up.)

As Trump continued to insist that he has done more for Black people than anyone—with the “possible” exception of Abraham Lincoln—and attacked Biden for not “doing anything” as vice president, it became clear that Trump can only see race through the prism of crime. Granted, HBCU funding and opportunity zones got a special shout out, but he was laser-focused on the 2018 First Step Act, a bill that enjoyed rare bipartisan support that sought to allow some inmates to reduce their sentences and be released quickly. The actual implementation of the law was less straightforward, with advocates saying that some inmates had been denied early release.

But Trump continued to hammer it home as his crowning achievement for Black people. “Why didn’t you do it?” he repeatedly asked Biden, even as he attempted to derail the conversation about race and attack the former vice president with a smear involving his son Hunter. Welker managed to get the conversation back on track, asking Trump what he says to Americans after having described Black Lives Matter as a hate symbol. The president had several options in how to respond. Naturally, he took the low road. After referring to one instance where protesters chanted about frying police officers like bacon, as if this were a regular feature during racial justice protests, Trump returned to his usual greatest hits. “I don’t know what to say!” he exclaimed on stage when Welker asked him about voters finding his language offensive. “I got criminal justice reform done!”

.@JoeBiden: "[Donald Trump] pours fuel on every single racist fire. This guy has a dog whistle about as big as a foghorn." #Debates2020 pic.twitter.com/rxtFpeALkc

The message was clear: What else could Black people possibly want from him? He’s incapable of discussing race outside of the prism of violence, because he appears to see Black people as being inherently violent.

Welker then asked about fence line communities, neighborhoods that abut oil and gas facilities and whose residents often suffer devastating health consequences. Biden shared a story about how his family used to live near oil refineries in Delaware. When it was cold, his mother sometimes had to deal with an oil slick on her windshield before driving him to school. Trump opted to brag about what he described as the record low Black unemployment rate. He did not mention that what’s considered a record low for Black workers would be considered a disaster for white ones. Trump also framed the fence line issue as good news. “They’re making a lot of money!” he said about the communities of color who face serious health effects, often through generations, because of environmental concerns in their neighborhoods.

Tonight, Trump said all the things he always says about Black voters. Only a racist thinks solely about prison and crime upon merely hearing the phrase ‘Black people’ or learning that the topic to be discussed was race in America. The injustice of it all is also coupled with the absurdity of it all. Trump needs to expand his lily-white base if he wants to win a second term. Repeatedly discussing a single bill that dealt with prison reform as if that’s the only thing in this country that affects Black people is a terrible political strategy.

But what else can we expect? Trump has had absolutely nothing meaningful to say to Black voters. Black people have suffered disproportionately from the coronavirus and the economic calamity that ensued as a result of the necessary public health restrictions. Even without the pandemic, Black people are facing the worst effects of climate change, disparities in health care, and lower wages than their white counterparts. Trump thinks criticizing Biden for being too tough on crime (despite also billing himself as the “law and order” candidate) is the message that’s going to resonate with Black voters. He doesn’t realize how fundamentally racist all his talking points really are.

But even with all of his usual blather, Trump had a moment that focused on the gathering that night. Nothing illustrated how disconnected he is from Black America than when he glanced around the event space, which included a Black woman moderator, and proclaimed, “I am the least racist person in this room.”

Donald Trump just said at the #Debates2020 that he is "the least racist person in this room."