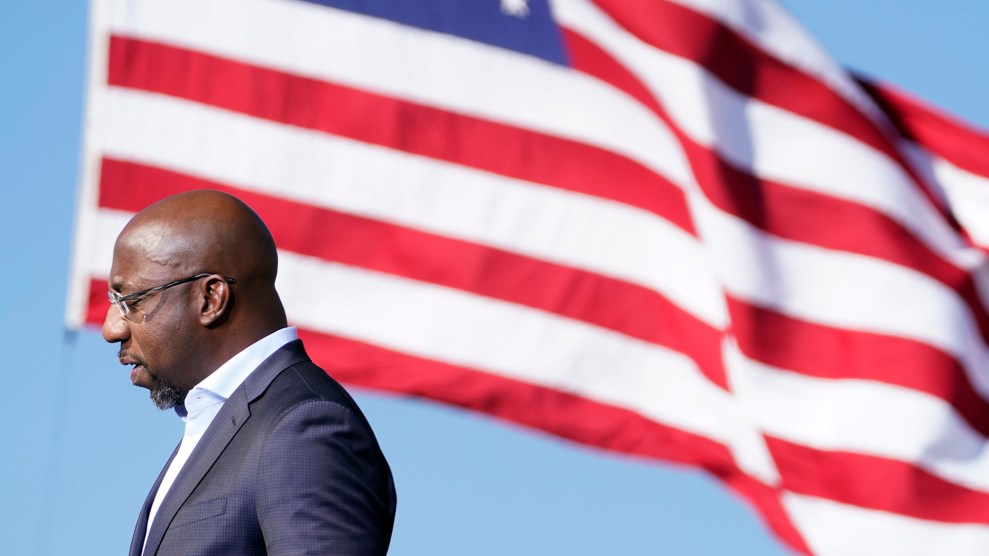 Raphael Warnock speaks to Biden supporters as they wait for former President Barack Obama to arrive at a rally at Turner Field in Atlanta. Brynn Anderson/AP

The race to fill an open US Senate seat in Georgia will go to a January runoff between Republican Sen. Kelly Loeffler and Democrat Rev. Raphael Warnock. This was the pretty widely expected result, given the crowded ballot with more than 20 candidates, the pandemic, and another Democrat who refused to drop out, making it more difficult for Warnock to get over the 50 percent threshold and avoid a runoff.

If Warnock wins in January, he’ll be the first Black senator to represent Georgia. But January runoff races are notoriously hard for the candidate who does not belong to the reigning party, which in Georgia, of course, is the Republican party. Without a national draw to the polls, Warnock faces a significant challenge in motivating his base to come out and vote.

His opponent, Loeffler, currently holds the Senate seat. She was appointed by Gov. Brian Kemp following the retirement last year of Sen. Johnny Isakson. Warnock and Loeffler couldn’t be more different candidates: While he built his campaign on access to health care and issues of racial and social justice, her campaign has leaned into creating an identity for her as a die-hard Trump ally, even welcoming the support of fellow Republican candidate and QAnon supporter Marjorie Taylor Greene. (Loeffer’s top Republican opponent in the jungle primary was Rep. Doug Collins, who conceded Tuesday night.)

Warnock, a preacher at the historic Ebenezer Baptist Church, began his candidacy as a relative unknown on the national scale, but he picked up steam quickly for a first-time candidate. As I wrote in an October profile of his candidacy:

Over the past couple months, partly due to grim circumstances, Warnock has cultivated a national profile. He delivered a stirring eulogy for Lewis when the civil rights icon passed away from cancer this summer. And following the police killing of George Floyd in May, VOTE WARNOCK began appearing organically on national TV screens—via T-shirts worn by WNBA players protesting Loeffler, who is also co-owner of a WNBA team and who made odious comments about Black Lives Matter. More recently, after the death of Supreme Court Justice Ruth Bader Ginsburg, money started pouring in from terrified, grieving Democrats to Warnock’s war chest, placing him ahead of all his opponents in fundraising. This was followed by endorsements from former presidents Barack Obama and Jimmy Carter, as well as Abrams. All of this has boosted Warnock to lead the crowded field in many polls this fall, and for his once long-shot bid to be considered a toss-up.

“The character of our country, the soul of the nation hangs in the balance,” Warnock tells me. But, he adds, “the best saints actually get their hands dirty. John Lewis embodied that—it’s not a kind of saintliness that stays out of the fray, it gets in the fray, it gets in good trouble.”