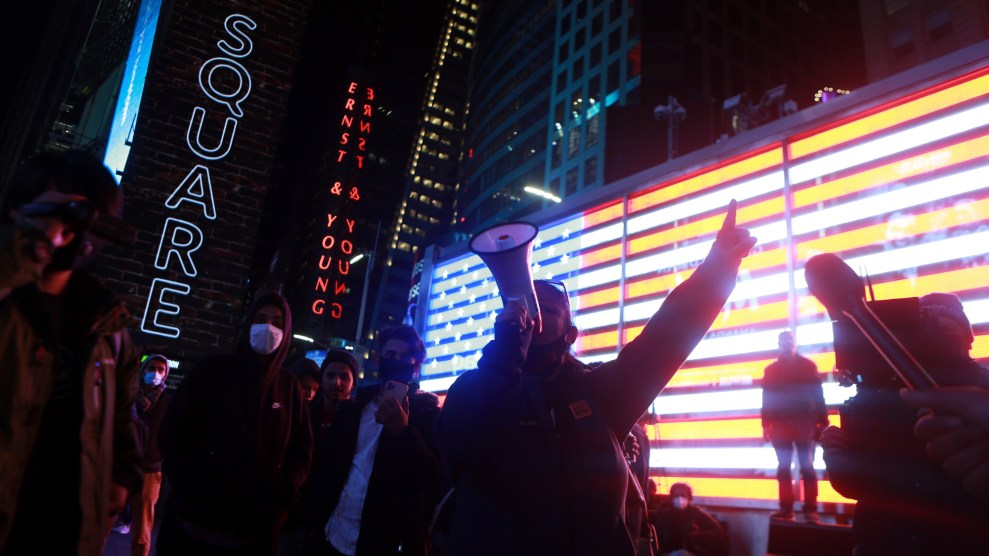 New York City was so New York City tonight, indulging in a collective sense of dread and on-brand anxiety, while the world watched and waited for final election results. But it wasn’t skipping a beat, either: A scheduled protest of a few hundred briefly swarmed a double-decker tour bus driver, who honked in support, while socially distanced diners clapped from converted bike lanes, and a woman struggled to alight a marooned yellow cab with her lap dog. Hey, New York seemed to say, I’m democratically backslidin’ here.

Javier Rivadeneria, a 30-year-old from Queens, was taking a break from his Taco Bell shift to gawk at the demonstrators. “People are sick and tired, and people are hurting,” he said, describing himself as “ecstatic” about the tightening of the tally in favor of Biden across the day.

But mostly, the New Yorkers I met tonight were embracing a trepidation deeply familiar to anyone who has experienced, well, 2020. “I’ve been so disappointed by the country before,” Lee, a 46-year-old social worker, told me, explaining why she was cautious about becoming too optimistic. “The election is fomenting this stuff,” she said, nodding at the protest, which had turned into a physical fracas in front of her al fresco dining spot. Police used their bikes to aggressively cordon off protesters and lock down a Greenwich Village intersection. Someone shouted, “NYPD go home! No one wants you here!” from an overlooking window. (A protest monitor later told me she witnessed at least two dozen people arrested across the night.)

RIGHT NOW: Protesters and NYPD converge in NYC as demonstrators march from Washington Sq Park.@jameswest2010 and I are following along—more in the thread below 👇 pic.twitter.com/WOoLuhFUAI

Isabel Verkes, a 31-year-old Dutch expat, saw tonight’s protest as an understandable reaction to tense times: a spasm of angst. “I think people are so angry and anxious,” she said. “I think this is releasing a lot of anxiety.”

Verkes had struck up conversation with another onlooker, Iyad Abdi, a 23-year-old student who had just finished up his architecture degree at nearby New York University. While Abdi had hoped for a deeper, more progressive political reckoning in the country, he was satisfied, for the moment, with relief: “I’m hoping for a collective national sigh”.

“Purgatory,” is how Katie, a 29-year-old art director at Cosmopolitan, described the wait for results—and the coming drag-out contest over results. “I’m prepared for it. It’s not going to stop.”

“These divisions were deeper than a lot of us recognized,” her friend, a financial controller, Jasmin Alkema agreed, provoking a feeling of being “completely depleted bordering on depressed.”

“Yesterday was the confirmation that half the country is okay with a racist,” she said. “I was hoping the country would prove it had a moral compass.”

She added: “Even if Biden wins, he’ll be the president of Trump’s America.”

As a restaurant quickly packed up outdoor tables and protest monitors scrambled to get the names of those who were detained, Katie gave voice to that unspoken creed of any true New Yorker: “I wouldn’t want to be anywhere else.”