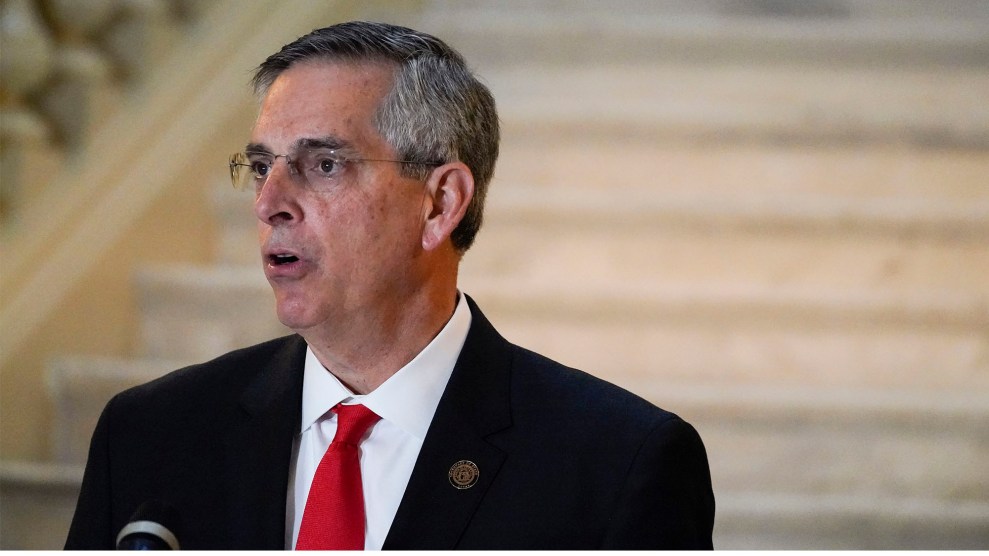 On November 30, Georgia’s Republican secretary of state, Brad Raffensperger, held a press conference to refute the “fantastic claims, half-truths, misinformation” spread by Trump supporters that the election was rigged.

But at the same time, Raffensperger announced he was opening an investigation into four progressive voter registration groups who he claimed “sought to register ineligible, out-of-state, or deceased voters.”

Establishment Georgia Republicans like Raffensperger have been widely lauded in the media for standing up to President Donald Trump’s baseless election claims. But with far less fanfare, they’ve continued to perpetuate a widely discredited narrative of voter fraud in order to build support for new restrictions on voting that will make it harder for Georgians—particularly in Democratic-leaning demographics—to cast ballots in future elections.

With control of the Senate hanging on Georgia’s two runoff elections on January 5, Trump’s actions are already making voting more difficult in the state, with key early voting sites closing as the recounts demanded by the Trump campaign have stretched election officials thin. But the narrative being pushed by Raffensperger and other state leaders could have much longer-lasting implications, spurring new restrictions that could impede voting in the suddenly competitive state for years to come.

One of the groups Raffensperger is investigating is the New Georgia Project, which was founded by Stacey Abrams in 2013 to register young people and voters of color in the state and was chaired by Democratic Senate candidate Raphael Warnock until February. The group, Raffensperger said on November 30, “sent voter registration applications to New York City” and would be “held responsible” if it encouraged “illegal voting.”

There was no evidence of fraudulent mail voting, but the mere perception of such fraud among Trump supporters is now enough to justify new restrictions.

Nsé Ufot, the CEO of the New Georgia Project, told me the accusation was “ridiculous” and “not true.” She said the group had sent postcards to volunteers, including in New York City, who wanted to send letters to eligible Georgia voters encouraging them to register and turn out on January 5. “Their allegation is we are trying to register voters out of state, which we are not,” she said. “It’s flimsy as hell—their evidence is thinner than a single strand of hair.”

A few days later, Raffsenperger held another press conference, where he held up postcards that had been sent by the group to his son who passed away two years ago, encouraging him to register to vote. “We have proof in our own home,” he said.

Ufot said the mailing had been sent to Raffsenperger’s son based on faulty data in Georgia’s voter file or other databases used to find unregistered voters and was not a nefarious attempt to register dead people to vote. Nonetheless, Trump supporters seized on the investigations as evidence that the voter fraud they claimed existed was now real. Fox News called it “a formal acknowledgement that there was some impropriety in the voting process.”

“When you hear reports like that of what’s happening in Georgia, it makes your blood boil,” Sen. John Barrasso (R-Wyo.) told the network. “This sounds like fraud…People need to be arrested here.”

“It shakes people’s faith in the process,” Ufot said of the allegations against her group. “He’s looking for ways to shrink the electorate and construct additional hurdles that people have to clear to participate.”

While Raffsenperger has defended the integrity of Georgia’s elections system, he and Gov. Brian Kemp have called for voter ID requirements to be extended to mail ballots. Under the proposal, voters would have to include a copy of a government-issued identification along with their mail-in ballots—an extra procedural hurdle than undermines the purpose of mail voting, particularly for people with mobility issues or a lack of access to printers and copiers. Republicans specifically declined to require identification for mail voting in 2005, when they believed more Republicans than Democrats would vote by mail. “Voters casting their ballots in person must show a photo ID, and we should consider applying that same standard to mail-in balloting,” Kemp said last week.

Leaders in the Republican-controlled state legislature have gone much further, vowing to take up sweeping restrictions on mail voting when they convene in a new session next year after the runoff. These measures would make mail voting available only to people with a valid reason, ban drop boxes for mail voting, and make it easier to reject mail ballots.

Though Republicans have long touted mail voting in Georgia, this year Democrats—and Black voters in particular—voted by mail at much higher rates than GOP voters after Trump attacked the process. Georgia House Speaker David Ralston predicted in the spring that mail voting “will be extremely devastating to Republicans and conservatives in Georgia.”

“We can look at state after state in the country where those disinformation narratives are directly connected to restrictions on the right to vote.”

There was no evidence of fraudulent mail voting in Georgia or any other state in 2020, but the mere perception of such fraud among Trump supporters is now enough to justify new restrictions on voting. “The Georgia Senate Republicans have heard the calls of millions of Georgians who have raised deep and heartfelt concerns that state law has been violated and our elections process abused in our November 3, 2020 elections,” the state senate GOP caucus said in a statement on Tuesday. “We will fix this.” Georgia Deputy Secretary of State Jordan Fuchs argued that voter ID requirements were needed for mail ballots to prevent candidates from claiming the election was rigged.

“We have a Republican Party that is singularly focused on disinformation warfare around nonexistent voter fraud,” Lauren Groh-Wargo, CEO of the voting rights group Fair Fight and Abrams’ 2018 gubernatorial campaign manager, told me. “We can look at state after state in the country where those disinformation narratives are directly connected to restrictions on the right to vote.”

There’s a long history of this tactic in Georgia. In 2014, when he was secretary of state, Kemp first opened an investigation into voter registration drives by the New Georgia Project, which Abrams was overseeing at the time. “We’re just not going to put up with fraud,” Kemp said. The group submitted 85,000 voter registration applications that year, and roughly 50—.06 percent of the total—were deemed to be forgeries submitted by independent contractors. (Under Georgia law, the New Georgia Project was required to submit all applications it received, regardless of whether they were legitimate.) Kemp’s own investigator concluded there was no evidence of wrongdoing, and no one was charged. Yet Kemp continued to raise the specter of fraud to erect new barriers to voting, such as removing voters from the rolls, blocking registration drives, and rejecting mail ballots.

After an array of voting restrictions disproportionately disenfranchised Abrams supporters in 2018, access to the ballot was expanded in Georgia in 2020, allowing for record turnout and the emergence of a diverse coalition that helped Joe Biden win the state. Abrams is expected to run for governor in 2022, and Georgia Republicans are already plotting how to prevent a Democrat from carrying the state again.

“This feels, in a lot of ways, like the last stand for white supremacy and the Republican Party,” says Ufot. “They are going to break the machinery of democracy on their way out the door.”

Already, some voters may have fewer opportunities to vote in the crucial Senate elections on January 5 than they did in November. Four of the ten most populous counties in the state are closing early voting locations for the runoffs. That includes Cobb County, the third-largest county in the state, which Biden won by 14 points. The county is cutting the number of early voting sites from 11 to 5, consolidating four voting locations in the southern part of the county that are home to many Black and Latino voters into just one. During early voting for the November election, some residents waited up to 10 hours to vote in Cobb County.

Cobb County elections director Janine Eveler says Trump’s actions are already having an impact on the runoff elections. The reason six of the county’s early voting sites are closing, she says, is that she can’t recruit enough people to staff the early voting sites, given all the people working on the recounts Trump requested. (Amid an outcry, the county agreed to reopen two polling sites for the last week of early voting.)

But whatever effect the closure of polling places will have on the runoffs, it’s a mere preview of the much broader voter suppression strategy Georgia Republicans—even those who stood up to Trump—will employ next year.