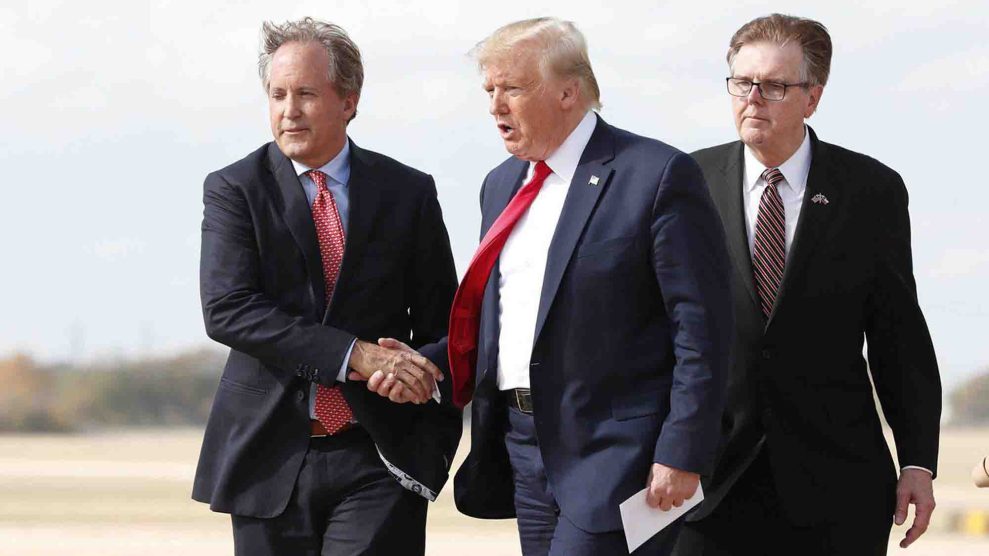 The Supreme Court on Friday threw out a Texas lawsuit that aimed to invalidate millions of ballots in four swing states. Had the suit been successful, it could have effectively handed the presidential victory to Donald Trump.

The case—which was filed by Texas Attorney General Ken Paxton (R) and supported by the Republican AGs of numerous states—argued that Georgia, Wisconsin, Michigan, and Pennsylvania “unconstitutionally” changed their voting procedures in the run-up to the November election. The suit also asked the Supreme Court to delay the December 14 meeting of Electoral College electors.

It looks like we have a new leader in the “craziest lawsuit filed to purportedly challenge the election” category:

The State of Texas is suing Pennsylvania, Georgia, Michigan, and Wisconsin *directly* in #SCOTUS.

(Spoiler alert: The Court is *never* going to hear this one.) pic.twitter.com/2L4GmdCB6I

“The State of Texas’s motion for leave to file a bill of complaint is denied for lack of standing under Article III of the Constitution,” the Supreme Court wrote in an unsigned order. “Texas has not demonstrated a judicially cognizable interest in the manner in which another State conducts its elections.”

State and federal judges have repeatedly shot down lawsuits challenging the election results in the four swing states named in the suit, and on Tuesday, the Supreme Court refused to consider a lawsuit that sought to overturn the results in Pennsylvania.

If you’re wondering why Texas is filing a lawsuit challenging election procedures in other states, that’s exactly the point: The Supreme Court has “original jurisdiction” to handle interstate disputes, typically over issues like water rights. Constitutional law experts across the political spectrum derided this lawsuit. Rick Hasen, a legal scholar and law professor at the University of California, Irvine, enumerated the reasons the lawsuit was outlandish on his blog:

Texas doesn’t have standing to raise these claims as it has no say over how other states choose electors; it could raise these issues in other cases and does not need to go straight to the Supreme Court; it waited too late to sue; the remedy Texas suggests of disenfranchising tens of millions of voters after the fact is unconstitutional; there’s no reason to believe the voting conducted in any of the states was done unconstitutionally; it’t too late for the Supreme Court to grant a remedy even if the claims were meritorious (they are not).

Paxton, the Texas attorney general who brought the suit, was also the engineer of the far-fetched plot to take down Obamacare. He won reelection in 2018, despite having been under indictment on securities fraud charges since 2015. He pleaded not guilty to the charges, calling them a “political witch hunt.” He is also reportedly under a separate FBI investigation related to allegations that he used his office to benefit a wealthy donor. He has denied wrongdoing.