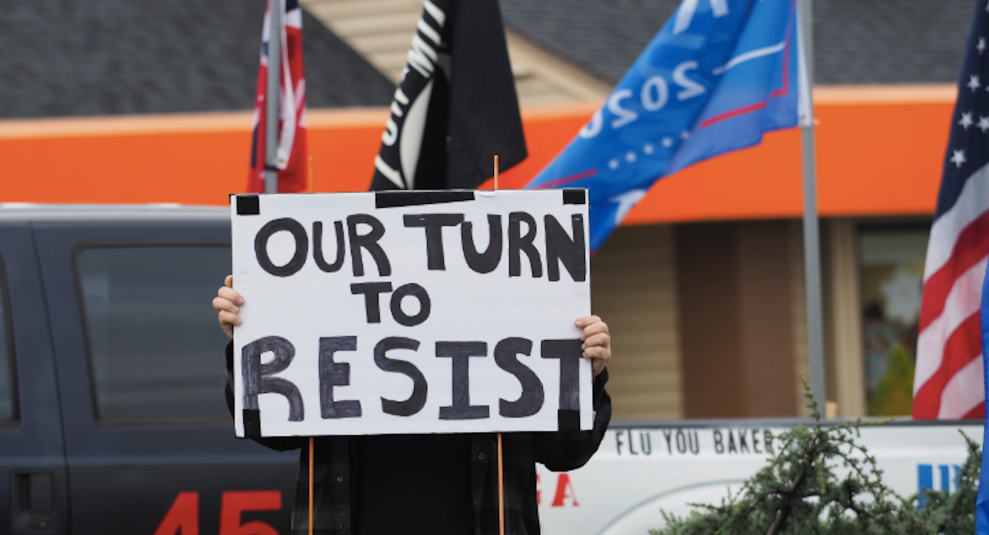 A Trump supporter holds a sign indicating the willingness to resist the election results during a rally on Cape Cod.Sue Dorfman/ZUMA

Jocelyn Benson and her young son were decorating the house with Christmas decorations on Sunday when dozens of armed protesters arrived outside, chanting, “Stop the steal” and “You’re a threat to democracy.” That’s according to a statement from Benson, Michigan’s secretary of state, along with video recordings of the incursion, an incident directly traceable to President Trump’s baseless conspiracy theories of election fraud and targeting of individuals he has falsely accused of conspiring to steal the election from him.

“The demands made outside my home were unambiguous, loud, and threatening,” Benson said late Sunday. “They targeted me in my role as Michigan’s Chief Election Official. But the threats of those gathered weren’t actually aimed at me—or any other election officials in this state. They were aimed at voters.”

The armed intimidation comes roughly two months after the FBI uncovered a plot to kidnap Michigan’s Gov. Gretchen Whitmer, wherein six men were charged with federal crimes for allegedly surveilling Whitmer’s home and conspiring to kidnap her to a “secure location.” That alleged plot follows months of Trump inciting supporters and far-right militia groups to “liberate” Michigan and resist Whitmer’s “lockdown” orders intended to slow the spread of the coronavirus.

Benson, of course, isn’t alone. Trump’s rhetoric has fueled verbal attacks and physical threats against myriad election officials and lawmakers, even some Republicans, in the wake of his efforts to discredit the November election results. “It’s all gone too far,” Gabriel Sterling, a longtime Republican and Georgia election official, said in a press conference last week. He continued, addressing Trump directly: “Stop inspiring people to step up and commit potential acts of violence.” As columnist Michelle Goldberg wrote for the New York Times, that entreaty, while an appropriate condemnation of Trump’s harassment campaign, smacks of hypocrisy; Republicans were, and remain, overwhelmingly silent when the president promotes violence against Democrats. But the dangerous antics outside Benson’s home on Sunday showcase the terrifying effects of the abject failure of the party’s highest-ranking members to hold Trump accountable for whatever he’s attempting to pull off as he exits the White House.

While it is tempting to believe that all this will end on January 20, a look at the persistent harassment of Hillary Clinton offers a depressing alternative. (Below, you can see Trump devotees still gathering outside her Chappaqua home screaming “Lock her up!” more than four years after she was defeated.) The failure of Republicans to denounce similar intimidation efforts might mean this unhinged state of affairs is here to stay.

Today, protesters gathered outside the Clinton residence in suburban New York and chanted “Lock her up!” This is a recording from one of Hillary Clinton’s neighbors. This is nuts. pic.twitter.com/ioI7fvToPR

There are Trump supporters outside my parents’ house shouting through megaphones “Lock Her Up,” and I just keep thinking, I hope they’re wearing masks and some day get over 2016.