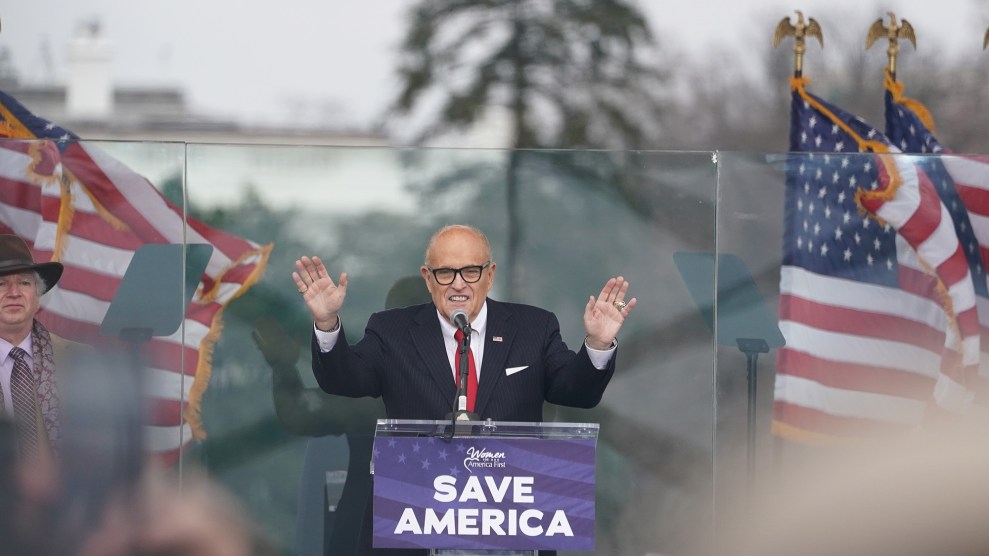 Rudy Giuliani speaks to at a Trump rally protesting the 2020 election results in Washington, DC., on January 6, 2021. Attendees later attacked the US Capitol. Bryan Smith/ZUMA

Rudy Giuliani is in professional danger. The president’s lawyer faces the prospect of expulsion from the New York Bar Association for his role in frivolous lawsuits seeking to overturn the results of the presidential election, as well as for his speech inciting insurrection in Washington, DC, on January 6. *

Alongside President Donald Trump, Giuliani rallied thousands of Trump supporters shortly before Wednesday’s attack on the US Capitol Building. “If we’re wrong, we will be made fools of, but if we’re right a lot of them will go to jail,” Giuliani said of his baseless allegations that fraud deprived Trump of victory on November 3. “Let’s have trial by combat.”

In a statement Monday morning, the New York State Bar Association announced its investigation into Giuliani. The bar’s bylaws say that “no person who advocates the overthrow of the government of the United States, or of any state, territory or possession thereof, or of any political subdivision therein, by force or other illegal means, shall be a member of the Association,” the statement noted. “Mr. Giuliani’s words quite clearly were intended to encourage Trump supporters unhappy with the election’s outcome to take matters into their own hands. Their subsequent attack on the Capitol was nothing short of an attempted coup, intended to prevent the peaceful transition of power.”

If the bar association does decide to expel Giuliani, he would not automatically lose his law license. In New York, disbarment decisions are made by the Appellate Division of State Supreme Court.

If the House follows through with its plan to once again impeach Trump—this time for inciting insurrection—Giuliani is on deck to defend Trump in the resulting Senate trial.

The question of sanctions against the lawyers working to overturn the election has been percolating since November. Thousands of attorneys signed a petition in December calling for the disbarment of those involved in lawsuits seeking to undo the results. And complaints have been filed with bar associations across the country. But the task falls to state bars to actually oversee an investigation and determine a subsequent sanction, and those bars are often unprepared to take on high-profile attorneys. The investigation into Giuliani is the first public affirmation of a state bar moving forward to hold attorneys involved in the frivolous and dangerous lawsuits—as well as Wednesday’s attempted coup—accountable. As legal ethics expert Scott Cummings told Mother Jones last month, “This is the most extraordinary event, as a matter of legal ethics, and as a matter of democratic integrity, that I think any of us have experienced. If the bars cannot find the political will and resources to do something about that, then they are really risking their legitimacy.”