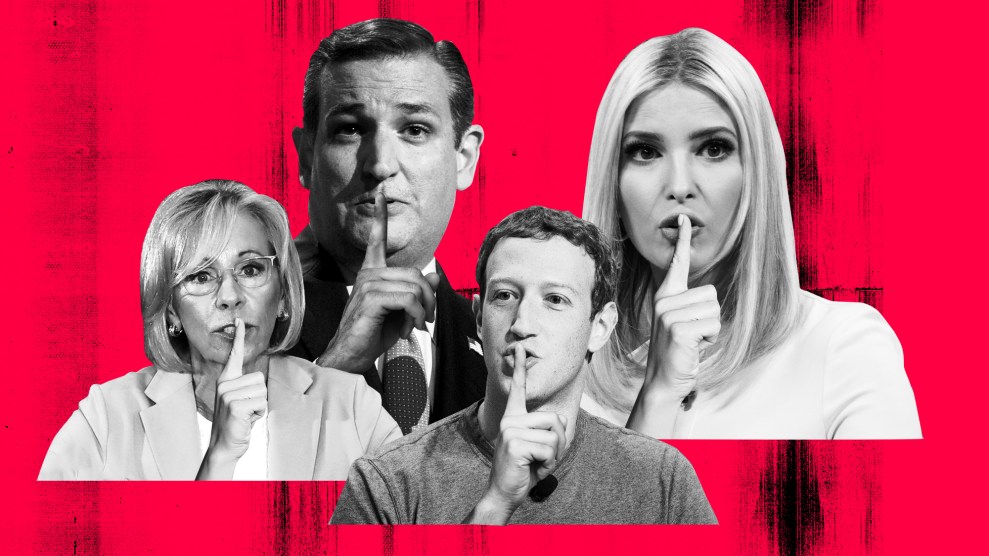 Powerful enablers who up until this week had stuck by Donald Trump as he incited and practically begged his supporters to unleash violence are suddenly over it. The very people who’d spent years treating Trump rallies as nothing more than walk-in dioramas of hate—cartoonishly evil but still just a cartoon—are suddenly issuing blistering statements. Tweeting curse words. Saying enough of this president. But let’s be real: The panicked efforts we’re seeing this week are nothing more than a performance of strained morality and self-pity.

Don’t get us wrong, condemning violence is always good. Welcomed! But it’s not nearly enough to erase what came before. So to this parade, we can’t help but say—how should we put this?—fuck off. Too little, too late. Below is a non-comprehensive list of those who deserve your best wishes.

The Texas Republican, whose transformation from rising GOP star into one of the Trumpiest congressmen of them all, is mad. But Crenshaw is decrying the very bullshit he had a direct hand in shitting out. Did he honestly believe we had already forgotten how he promoted the entirely false allegations of a stolen election that pro-Trump insurrectionists turned into a rallying cry for domestic terrorism? Well, we didn’t. Nor did we forget that in 2017, Crenshaw went on national television to defend the president’s “both sides” comments in the wake of Charlottesville, claiming that Trump was “definitely not referring to white nationalists” as fine people.

The Education Secretary and sister to Erik Prince was AWOL throughout 2020, taking a back-back-back seat as the country struggled with some of the most important education decisions amid a pandemic. But with two weeks left, DeVos has suddenly reemerged to let us know that she’s both alive and not happy. “We are left to clean up the mess caused by violent protesters overrunning the US Capitol in an attempt to undermine the people’s business,” she wrote in a statement. “There is no mistaking the impact your rhetoric had on the situation, and it is the inflection point for me.”

Those are some tough words for a woman who had all but abandoned her post long before this week’s horror. As schools around the country remain floundering amid the worst wave of the pandemic yet, let’s memorialize DeVos as perhaps the most ill-equipped education secretary in quite some time. Maybe ever.

After years of arrogant resistance and emperor cosplay, the Facebook founder finally blocked Trump on its platforms until Jan. 20, writing that the risks of “allowing the president to continue to use our service during this period are simply too great.” The move is something of a break, at least temporarily, from Zuckerberg’s near-total willingness to side with Trump despite pleas from civil rights groups, as well as the company’s overwhelming failure to combat abuse and extremist ideology by the pro-Trump insurrectionists we saw rampage Congress. Banning the president’s spigot of bigotry for the next two weeks—after years of accruing immoral levels of wealth—is therefore just not going to cut it.

STOP. Just STOP. Peace. Law and Order. Safety for All

The former Trump adviser and prolific liar once had quite the self-serving spin on the violence she now claims to reject. “The more chaos and anarchy and vandalism and violence reigns,” Conway told Fox & Friends in August, “the better it is for the very clear choice on who’s best on public safety and law and order.”

Fmr AG Bill Barr says Donald Trump's conduct as a violent mob of his supporters stormed the U.S. Capitol was a "betrayal of his office and supporters." In a statement to The AP, Barr said that "orchestrating a mob to pressure Congress is inexcusable."

Such a statement from a former attorney general and fierce presidential ally would normally land as scathing. And maybe it is. Except for the fact that Barr has had a direct role in encouraging some of Trump’s very worst instincts, including the administration’s decision to forcibly remove peaceful protesters in Lafayette Square last summer. Since falling out with the presidential terrorist last month, Barr has been eager to shut down Trump’s bogus claims on the way out the door. But his legacy as one of the most corrupt attorney generals remains well intact.

The former White House chief of staff, who was humiliatingly replaced and shipped out to Northern Ireland, resigned on Thursday. “I can’t stay here,” he told CNBC. But as I wrote earlier, Mulvaney is a rat jumping ship. His announcement, a limp gesture, is an act of 11th-hour self-rehabilitation. It will do little to launder his front-row look at the violence, white nationalism, and chaos that unfolded over the past four years, long before this week’s mayhem.

On Thursday, the Transportation Secretary and wife of Mitch McConnell became the first Cabinet member to flee in the wake of this week’s attempted coup. “Our country experienced a traumatic and entirely avoidable event as supporters of the President stormed the Capitol building,” Chao wrote in her resignation letter. “As I’m sure is the case with many of you, it has deeply troubled me in a way that I simply cannot set aside.” But we haven’t forgotten Chao wagging her finger at protesters demonstrating against the Trump administration’s inhumane immigration policies. “Why don’t you leave my husband alone!” Chao cried, smacking down the accusation that the Senate majority leader supported the administration’s policy of separating children at the border.

I could not agree more with President-elect Biden’s statement to the nation.

Time to retake the Capitol, end the violence, & stop the madness.

Time to move forward in governing our nation.

You’d be hardpressed to find another Republican senator, one who has spent his career insisting that he’s just a principled public servant, who so shamelessly fashioned himself into one of Trump’s biggest enablers over the past four years. But after getting besieged by the mob this week, Graham wants you to believe that his “hell of a journey” with the president has now come to a halting screech. Still, he doesn’t support invoking the 25th Amendment until “something else happens.”

No. Peaceful protest is patriotic. Violence is unacceptable and must be condemned in the strongest terms. https://t.co/GwngZTqzTH

A whole dissertation could be written on Ivanka-flavored hypocrisy. There’s her obscene commitment to cultivating a public persona that doesn’t exist, bean ambitions, and tone-deaf advice to the millions of unemployed. But let’s start simple and turn our attention to the most recent: her deleted tweet praising the mob as “patriots” in between what appears to be a swift exit from DC.

Violence is always unacceptable. Even when passions run high.

Anyone engaged in violence—especially against law enforcement—should be fully prosecuted.

God bless the Capitol Police and the honorable men & women of law enforcement who show great courage keeping all of us safe.

For this exercise, I’ll again recommend looking at the most recent: the Texas senator’s role in leading a band of Republicans to object to the election results. And despite everything that took place on Wednesday, Cruz didn’t even blink. Instead, he forged ahead to deliver exactly what the mob wanted.

The Florida Republican could have left this week largely unnoticed. But his apparent commitment to embarrassing himself before the altar of Trump had other plans:

Violence has no place in our civil society, and I categorically condemn what’s happening in the U.S. Capitol.

In 2017, while campaigning for Congress, Gianforte literally body-slammed a reporter for asking him a question about health care—and for hours avoided issuing an apology. Gianforte’s campaign even attempted to blame the shocking assault on the Guardian‘s Ben Jacobs, claiming that Jacobs’ line of questioning had been “aggressive.” Despite violently attacking a reporter, Gianforte still won his election and later earned Trump’s praise: “He’s my kind of guy.”

Haley’s unmistakable thirst for the White House has often led the former United Nations ambassador for the Trump administration to toe the line of something resembling a dignified Republican and an all-out sycophant supporting some of Trump’s most despicable lies. The latter certainly appeared following the president’s baseless claims of election fraud. “Despite what the media tells us, election fraud does happen,” Haley said in a Nov. 13 tweet, days after Biden’s victory had been officially called, “harvesting and mailing ballots to people who don’t request them makes it easier.”

But after Wednesday, Haley apparently remembered her other self: “President Trump has not always chosen the right words,” Haley told a group of RNC members in a closed-door speech, according to Politico, concluding that Trump’s “actions since Election Day will be judged harshly by history.”