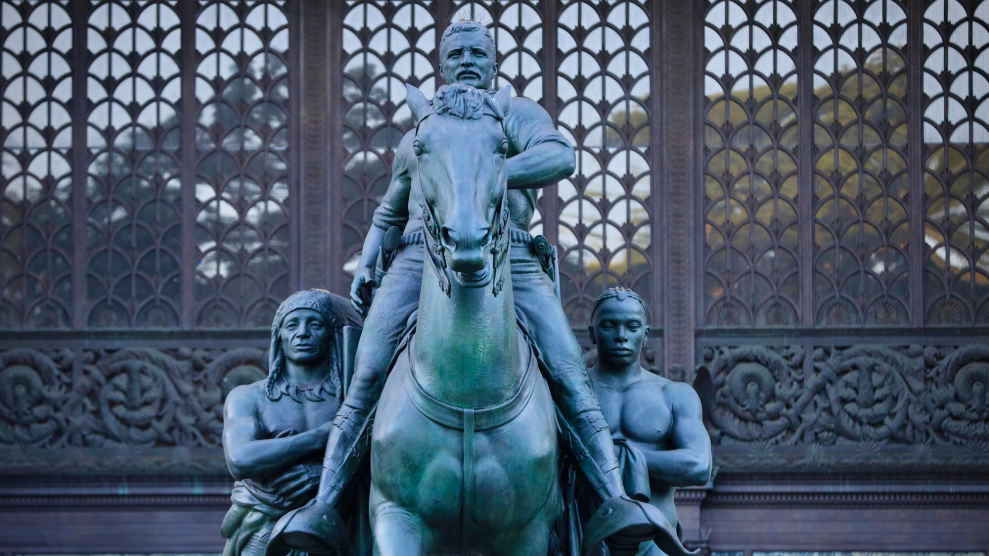 Theodore Roosevelt's equestrian statue has stood in front of the Museum of Natural History since 1940. It will soon be removed.Vanessa Carvalho/ZUMA

The uprisings sparked by George Floyd’s death are, ostensibly, about the war on Black lives. Protesters demand that we say the names of the deceased, that their murderers be brought to justice, that the institution of policing be re-thought, defunded, dismantled. Yet as the anger and grief simmer, a deeper purpose has crystalized: dismantling white supremacy in all its various forms.

Days after Floyd’s death, protesters defaced Confederate memorials and torched buildings connected to slavery. Within another week, more than a dozen racist statues were toppled, removed, or beheaded, sometimes with municipal support. Collective consciousness evolved in a frenzy; long-resisted changes suddenly felt like no-brainers. The Marines banned displays of Confederate flags on their bases, while brands raced to retire dated symbols. It’s been nothing short of a reckoning—and not just for Aunt Jemima and Robert E. Lee.

In Boston, Richmond, and St. Paul, it was Christopher Columbus’s turn to fall. In New Mexico, two cities removed monuments to Juan de Oñate, a colonial governor who ruled so brutally that he was exiled by his Spanish overseers. Monument fever quickly spread overseas: English activists drowned the statue of a slave trader in Bristol, while protesters in Belgium assailed effigies of King Leopold II, who presided over a genocide of Congolese people in the 19th century.

At the New Republic, Sappony writer Nick Martin called for the tide to also sweep away less egregious colonizers, since Roosevelt, Washington, Jefferson, and “countless others still honored across our landscapes are [also] responsible for genocide, land theft, and forced assimilation” of Indigenous peoples. His piece was called “Now Do Lincoln.”

Why take down Honest Abe, “the Great Emancipator,” who we celebrate on Juneteenth for ending this country’s (overt) enslavement of African-descended peoples? Because we’re not just reckoning with the value of Black lives—we are re-evaluating our history as a country built on stolen land with stolen labor.

The histories of Black and Indigenous people are inseparably intertwined. In their essay “Decolonization Is Not a Metaphor” (which argues that anything less than the return of Native lands should not be considered “decolonizing”), scholars Eve Tuck and K. Wayne Yang define settler colonialism as “built upon an entangled triad structure of settler-native-slave,” in which laborers brought from other countries become “deathlike monsters in the settler imagination,” while Indigenous peoples are erased.

The connection became further entrenched as enslaved people and Native tribes, both hunted by settlers, hid and protected each other throughout US history, frequently mingling their cultures and bloodlines. Alongside thousands of Black people, an untold number of Native Americans were lynched throughout the 19th and 20th centuries. Abraham Lincoln ordered the largest mass execution in US history in 1862, when he had 38 Dakota men hanged for inciting a small rebellion as the government starved their people. Tellingly, only a handful of Confederates were executed after the Civil War.

Black and Indigenous fates are still entangled. As I reported last week,

A CNN analysis of data from the Centers for Disease Control and Prevention found that Native Americans were slightly more likely than Black people to die at the hands of law enforcement between 1999 and 2015, though the rates are often neck-and-neck….In 2011, Derek Chauvin, the officer who killed George Floyd, was involved in the shooting of an Alaska Native named Leroy Martinez. (A witness claimed Martinez had surrendered his gun and had his hands in the air when he was shot.) Recognizing their common experience of police brutality, Native youth stood shoulder-to-shoulder with Black protesters throughout this year’s Minneapolis uprising.

That’s why Washington’s NFL franchise was called a hypocrite for tweeting in solidarity with #BlackLivesMatter, while clinging to a team name that’s a blatant anti-Indigenous slur. It’s why Joe Biden, in an NAACP town hall earlier this month, raised the question of whether reparations should be paid to Native Americans, too. And it’s why Natives standing in solidarity with Black lives sometimes express frustration with the present moment’s focus.

“Indigenous women, men and children go missing and are murdered every day,” an Assiniboine and Sioux activist told the Great Falls Tribune in Montana. “Where’s the outrage for them? Where’s the outrage for the generational trauma that people are still dealing with on reservations?” A Blackfeet tribal member added, “It seems like we get forgotten because America is ashamed, or embarrassed about its treatment of us.”

Giving Native American communities their due might seem even more difficult than defunding the cops—but in a time when police stations have been torched and abandoned, everything is up for grabs. A country finally ready to confront the brutality of its policing is one also prepared to dredge other skeletons from its past, to have hard conversations and begin the work of radical reimagining.

Migrants and refugees from all corners of the world encounter our system’s brutality; white supremacy makes sure of it. But Black and Indigenous people experience specific forms of racism that run all the way back to the founding of this nation, a nuance often lost in the catch-all “people of color.” You can’t end racism without also challenging white supremacy, colonization, and empire. One remarkable thing about the uprisings over the past month is that they’ve readily connected those dots.

Over the weekend, it emerged that the statue of Theodore Roosevelt at the entrance of the American Museum of Natural History in New York would be coming down. After years of complaints about the statue, the museum finally decided to take action, citing “the ever-widening movement for racial justice.” The monument depicts Roosevelt towering over a Native American and an African—white supremacy, colonization, empire. May its removal become a monument to end of these interlocking oppressions.