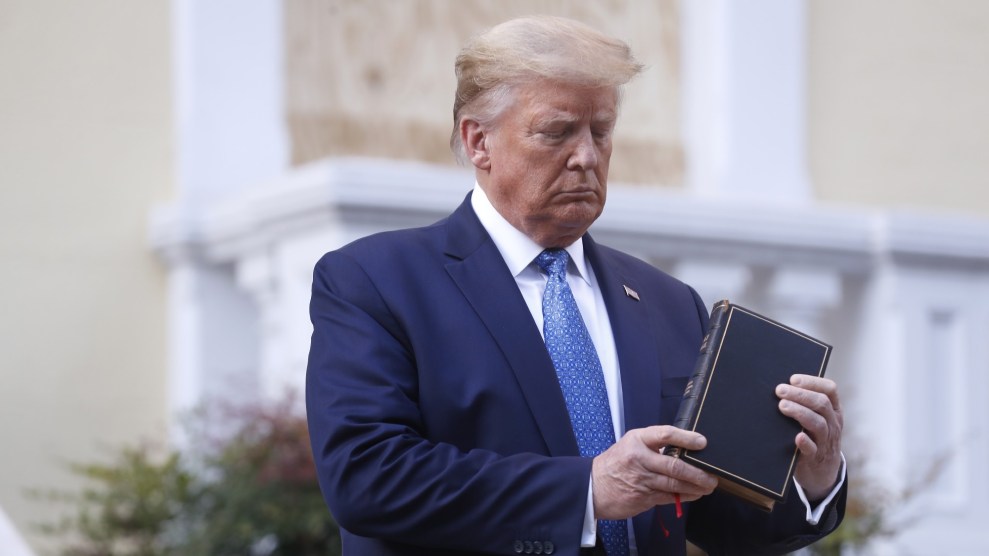 Many questions linger over what led to the events outside in the White House on June 1 in Lafayette Square, wherein US Park Police attacked peaceful protesters with tear gas and excessive force moments before Donald Trump strolled through the park for a photo op in front of a nearby church. The USPP has insisted that the reason for the crackdown wasn’t for Trump’s photo op, but instead to install a new perimeter fence. The agency has also maintained that the protesters weren’t peaceful, which necessitated the use of force and defensive weapons to clear the park. But during a House Natural Resources Committee hearing on the incident on Tuesday, both of these assertions were called into question by Democratic lawmakers and a National Guard whistleblower who testified that the USPP engaged in “an unprovoked escalation and excessive use of force.”

According to Gregory Monahan, the acting chief of the USPP, the plan to clear out the park and install the new fence on June 1 had been discussed up to two days prior, and “there was 100 percent, zero, no correlation between our operation and the president’s visit to the church,” he said. Attorney General William Barr, who said he ordered the clearance of Lafayette Park in order for new fences to be installed, also said that the effort had no connection to Trump’s photo op. But Barr admitted in a concurrent House hearing on Tuesday that he actually did learn “sometime in the afternoon that the president might come out of the White House” and that he later heard that Trump also planned to visit the church. Minutes before the park was cleared, he was captured on camera by CNN talking with a USPP officer. As Rep. Ruben Gallego (D-Ariz.) pointed out, something about the timeline of events that day doesn’t quite add up.

Thanks to @RepRubenGallego, we now know for sure that the Trump admin's explanation of what happened on June 1 doesn't add up.

Listen to him lay out the timeline of the #LafayetteSquare attacks and the president's appearance – which we're told had nothing to do with each other. pic.twitter.com/nAzRS8yj1z

And while Monahan and Barr insist that the reason Lafayette Square was cleared about 30 minutes before the 7 p.m. curfew was because the fencing materials had just arrived, Adam DeMarco, the National Guard whistleblower, backed up earlier claims that law enforcement officials were told that the park would only be cleared of protesters after the curfew went into effect. DeMarco also testified that the fencing materials didn’t arrive until 9 p.m.

One piece of evidence that might be able to clear all this up, however, is conveniently not available. As the Washington Post reported earlier this month, the audio of USPP’s radio communications system was not recorded on June 1, which Rep. Debra Haaland (D-N.M.) said “would answer a lot of the questions that we and public have at this moment.” According to Monahan, the reason why the radio transmissions weren’t recorded on that day had to do with a radio technician who set up the system incorrectly when the agency switched from an analog system to a digital format in 2018. The new system, Monahan explained, had only been set up to record transmissions from the USPP’s main dispatch channel, and not its secondary administrative channel, which is the channel that was used on June 1 so that USPP officers could communicate with law enforcement from other agencies. Monahan said that the agency did not realize the error in the system until they tried to pull the audio from the day in question on June 10.

But beyond the technical inconsistencies that Monahan testified about, the biggest bombshell to come from Tuesday’s hearing was during DeMarco’s testimony, when he countered Monahan’s assertion that USPP exercised “tremendous restraint” in clearing Lafayette Square. “Tremendous restraint does not involve the use of defensive equipment as weapons,” DeMarco said, referencing the use of pepper balls, smoke canisters, and other chemical irritants that USPP used to clear the park. DeMarco testified that he and other Guardsmen did not observe any violent behavior by protesters—which Monahan insisted was happening to justify the use of force—and were “deeply disturbed” by the tactics used to clear the park. DeMarco, who spent five years on active duty, including a combat deployment in Iraq, said that had his unit in Iraq done what federal agents did to the peaceful protesters on June 1, it would have violated the Geneva Convention.

BREAKING: Maj. Adam DeMarco, an Iraq vet now with D.C. National Guard, testified that if his unit had done in Iraq what federal agents did to peaceful Americans on #LafayetteSquare on June 1, it would have violated the Geneva Convention.

Americans were victims of a war crime. pic.twitter.com/URvFe5LXrZ