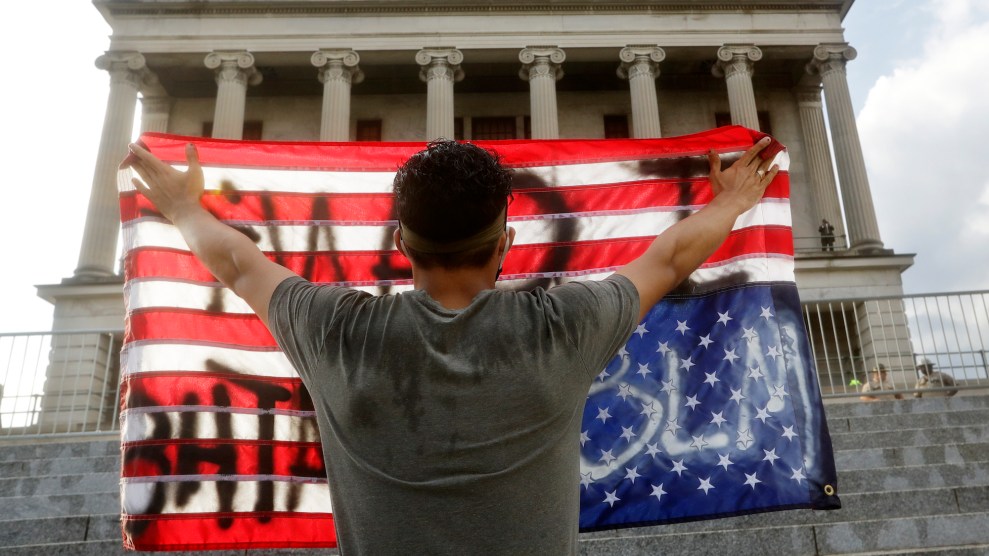 A man holds a flag upside down in front of the Tennessee State Capitol during a peaceful protest on Thursday, June 4. Mark Humphrey/AP

On Friday, Tennessee Gov. Bill Lee (R) signed a controversial bill that enhances penalties for certain crimes related to political protests and makes it a felony to illegally camp on state property. In Tennessee, a felony conviction automatically revokes an individual’s right to vote.

The bill follows two months of anti-racism protests in Nashville, during which activists have camped outside the state capitol building in an effort to secure a meeting with Lee. According to the Associated Press, state legislators claimed the law was needed after some protesters set fire to a courthouse in May. But civil libertarians were quick to criticize the measure as detrimental to free speech and criminal justice reform in a state that already uses felon disenfranchisement laws to bar large numbers of Black residents from voting.

Tennessee is one of many states that makes it virtually impossible for former felons to regain their voting rights. Just over 420,000 Tennessee residents have been disenfranchised because of a past felony conviction. Since 1990, fewer than 12,000 of them have succeeded in regaining their voting rights, thanks to an onerous process that applies even to people who have completed sentences for low-level felonies. As a result, more than 20 percent of Black Tennesseans are unable to vote.

“We are very disappointed in Governor Lee’s decision to sign this bill, which chills free speech, undermines criminal justice reform and fails to address the very issues of racial justice and police violence raised by the protesters who are being targeted,” ACLU of Tennessee Executive Director Hedy Weinberg said in a statement reported by the AP. “While the governor often speaks about sentencing reform, this bill contradicts those words and wastes valuable taxpayer funds to severely criminalize dissent.”

Tennessee isn’t the first state to try to crack down harshly on protesters involved in the recent demonstrations over police killings and racial injustice. Utah made international news when prosecutors charged eight protesters with enhanced felonies that carried a life sentence after they were arrested for allegedly splashing red paint on a road or smashing windows at the Salt Lake County district attorney’s office during a July protest. That demonstration erupted after the district attorney declined to press charges against the police officers who fatally shot 22-year-old Bernardo Palacios-Carbajal. On Friday, a retired judge handling the case reduced the charges against the protesters to lesser offenses carrying prison sentences of 5 to 15 years.