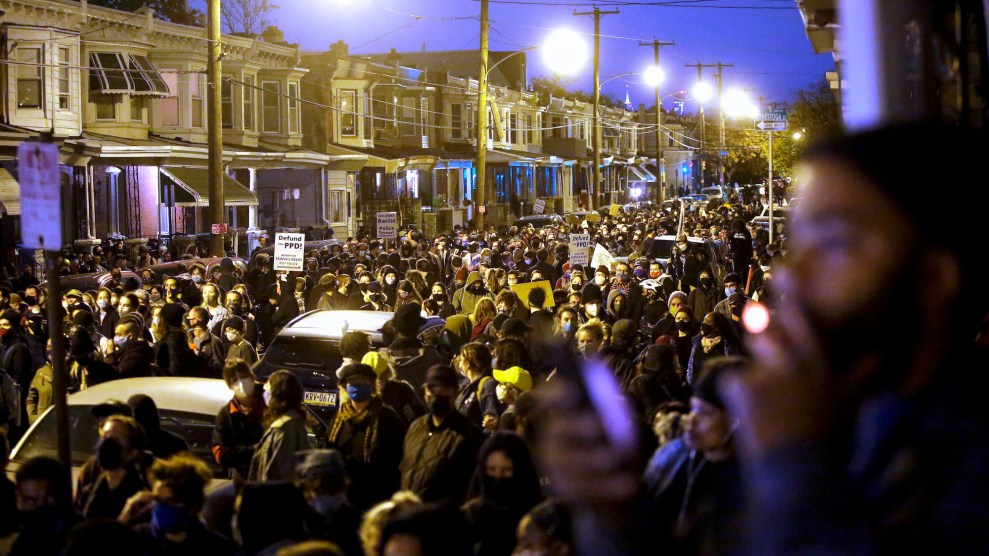 On Monday afternoon, nearly an hour into a virtual public hearing on how Philadelphia should oversee its police department, the Reverend Mark Kelly Tyler jumped into the video meeting, turning on his camera and microphone to inform the members of the city council’s Special Committee on Criminal Justice Reform that a young Black man had just been fatally shot by the cops.

Walter Wallace Jr., 27, had been killed on a street in West Philadelphia by police responding to a 911 call from Wallace’s relatives, who, according to a lawyer for the family, requested an ambulance because Wallace was experiencing a mental health crisis. A video of the shooting that circulated immediately on social media showed Wallace walking toward officers, who backed away from him with their guns drawn, while somebody yelled to “put the knife down.” They then fired at least 14 times.

Tyler saw the footage as the public meeting was beginning. “It’s truly horrifying,” he told the committee. “A man had a knife and I cannot—I stopped counting after 10 shots. So, I’m going down to the scene.”

Tyler saw the footage as the public meeting was beginning. His 16-year-old daughter had sent it to him on Instagram within minutes of Wallace being shot. The co-director of POWER Live Free, an interfaith activism campaign focusing on criminal justice issues in Philadelphia, Tyler at first didn’t believe it was real—it was so recent it hadn’t yet made the news. “It’s truly horrifying,” he told the committee when it was his turn to speak. “A man had a knife and I cannot—I stopped counting after 10 shots. So, I’m going down to the scene.”

That night, Philadelphia erupted in protests. Police arrested more than 170 people over two days, the city imposed a curfew, and the mayor called in the National Guard. It was a redux of the demonstrations that shook the city earlier this summer after the death of George Floyd—which led 14 members of the City Council to send Philadelphia Mayor Jim Kenney a letter in June rejecting a proposed $14 million budget increase for police and demanding stricter police oversight. Later that month, council members fast-tracked a bill to place on the November ballot a measure that would replace the city’s existing Police Advisory Commission with a new Citizens Police Oversight Commission.

Now, amid the unrest over Wallace’s death, residents of Philadelphia are voting on whether to establish the new body, which would be tasked with reviewing and improving police officer conduct, holding the department accountable for officers’ actions, and establishing a clear and transparent process for the handling of police misconduct complaints.

But the measure, known as Question 3, does not spell out how members of the commission would be selected, what their responsibilities would be, or how much power they would wield over the police department. Instead, it authorizes the city council to decide.

That means that if Question 3 passes, it will be in the hands of the city’s elected leaders to decide if the new body will be able to impose meaningful accountability on the Philadelphia Police Department—or if it will be a recreation of the existing, underfunded Police Advisory Commission, which Tyler has called “beyond toothless.” After budget cuts and the departure of its executive director, the current commission currently has just a handful of employees and a $550,000 annual budget to provide a check on a $727-million force of roughly 6,500 police officers, according to the Inquirer. (Kenney had previously restructured the commission in 2017, but not much changed—it now focuses on issuing reports about systemic issues in the department, while civilian complaints about police are handled internally by the police department.)

On Monday, the Special Committee on Criminal Justice Reform held a hearing to gather input from community members on what the commission should look like if Question 3 does pass. “This historic ballot question will create a blank canvas,” Councilman Curtis Jones Jr. said at the start of the meeting. “We as a city will be able to paint rules and regulations that will allow for questions of conduct of police to be considered.”

For months, POWER Live Free has been hosting town halls on Facebook Live with police oversight experts and professionals from around the country to gather ideas for how the new oversight body could work. Among their priorities, Tyler says, is for the commission to be independent of the mayor’s office, with elected members from different districts of the city, and to have full responsibility for setting police department policy. At the Monday meeting, Gayle Lacks, another leader of POWER Live Free, outlined additional demands: more investigators, a database of complaints, and guaranteed direct access for the commission to all police department records, with penalties for the police department if it doesn’t comply with requests for information.

“When they see us, it’s not as somebody who’s having the worst day of their lives, who needs to be saved.”

Eventually, Tyler adds, he would like the new commission to have the power to hire and fire the police commissioner, and determine how officers should be disciplined—but that would take another ballot initiative, as well as some serious wrangling over the police union contract. “What we don’t want is for this to be business as usual—that some deal gets cut with the [Fraternal Order of Police] and with the police department and council, we come out and police accountability in Philadelphia 2.0 is worse than before, and again, we have nothing but window dressing,” Tyler says.

It’s still unclear how or whether the cops who shot Wallace will face repercussions for his death. Police Commissioner Danielle Outlaw said the officers—who have not been publicly identified—have been taken off street duty while a team led by District Attorney Larry Krasner investigates; Outlaw has promised to release 911 recordings as well as the body cam footage. On Thursday, a lawyer for Wallace’s family said it did not want the officers charged with murder because “they were improperly trained and did not have the proper equipment by which to effectuate their job.” They intend to file a wrongful death lawsuit.

After logging off early from the council meeting, Tyler spent Monday evening talking to young people on the streets of the city who, he says, believed the officers fired because they were afraid. “When they see us, it’s not as somebody who’s having the worst day of their lives, who needs to be saved,” Tyler says. “It’s like this threat that needs to be extinguished.”

He hopes voters will draw a line from the shooting to their vote on the ballot measure: “These things are not disconnected. Our hope is that the community will see the same thing that we see—and recognize that this is a real moment for a much bigger win for all of us.”