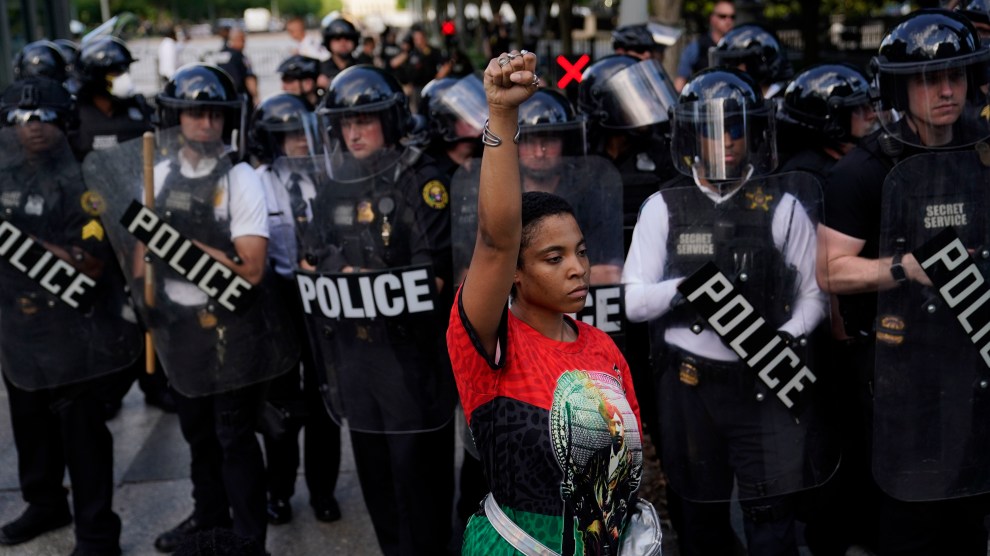 A demonstrator near the White House raises a fist in May 2020 as others gather to protest the death of George Floyd by a white police officer in Minneapolis.Evan Vucci, File/AP

It’s hard to quantify outrage and action, but roughly one year out from the devastating video of George Floyd’s life being snuffed out by former Minneapolis Police officer Derek Chauvin, it’s fair to ask: Is the racial reckoning that followed Floyd’s death and played out over the summer of 2020 one that’s built to last?

In an opinion piece published by the New York Times, two political scientists, Jennifer Chudy of Wellesley College and Hakeem Jefferson of Stanford University, measured voters’ attitudes on key racial justice issues over the course of 2020. They specifically wanted to know, as they put it: “Did George Floyd’s death catalyze support for Black Lives Matter? If so, for how long and for whom?”

The answers, in a nutshell, are: yes, briefly, and for white Americans and Republicans. The fleeting support for Black Lives Matter among the latter groups didn’t merely fade in time. It fell to new lows. White Americans actually became less supportive of Black Lives Matter than they were before Floyd’s death. This trend, the researchers note, “seems unlikely to reverse anytime soon.”

These two overlapping constituencies had plenty of help in reaching new levels of hostility toward Black Lives Matter, according to Chudy and Jefferson: “In the days and weeks following Floyd’s death, Republican politicians quickly turned attention away from the actions of a murderous police officer to those individuals protesting the injustice.” Put another way, the overwhelming grief of the pandemic combined with the shocking video of Floyd’s death was nothing when compared with the well-oiled machine of far-right groups and conservative media outlets.

Last summer’s protests set off an unprecedented outpouring of financial support for racial equity causes. Candid, a group that tracks foundation spending, reported $14.4 billion in racial equity giving from 2011-2020, of which $10.9 billion—76 percent—came in last year. Although approval of BLM is a flawed proxy for people’s support of racial equity, it remains to be seen whether white donors will keep supporting social justice causes at this level, or whether 2020 was merely a flash in the pan.

There is some more-lasting good news, though. The nation’s reckoning offered an opportunity for communities of color to build stronger cross-racial coalitions, as Latinx activists advocated for Black lives, and various groups have come together in recent months to address anti-Asian hate crimes. “This coalition-building may prove essential in counteracting the backlash toward B.L.M. observed among some whites and Republicans,” Chudy and Jefferson write.