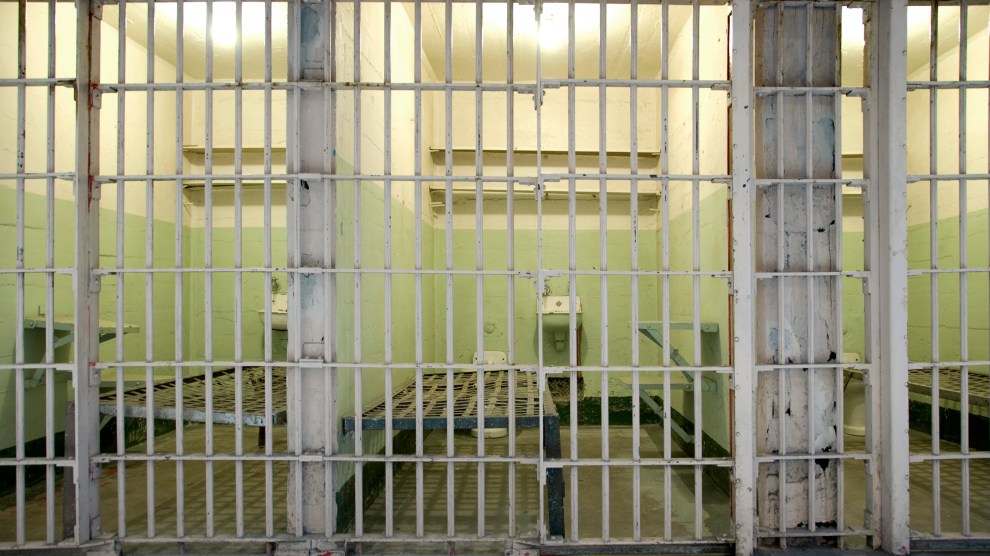 To keep the novel coronavirus from spreading, public health officials are urging everyone to stay at home and distance themselves from others. But for the 2 million people in jails and prisons across the country, often crammed into crowded holding cells or dorm-style housing units, that’s simply not possible: Incarceration creates a perfect breeding ground for infections. In the United States, no inmates have tested positive for the virus yet, but public health experts believe it’s only a matter of time: China saw an explosion of cases across its prisons in February. In Iran, officials announced earlier this month they would release more than 54,000 prisoners to try to prevent the disease from spreading there.

“If that virus hits our jail, our jail will not be able to operate, and everything will be crippled.”

In the United States, prisons and jails have so far resisted calls to release large groups of incarcerated people, despite warnings from public health and correctional experts about the dangers of crowded cells. But over the weekend, judges in Cleveland, Ohio, became some of the first to really take these warnings to heart: A county court held emergency hearings to let dozens of jail detainees go home early, with the goal of sending hundreds more back to their communities as soon as possible.

Thirty-eight people were released from the Cuyahoga County Jail after emergency hearings on Saturday, according to local reporters at a Fox affiliate and Cleveland.com. Some of these detainees went home on bond, while others were sentenced to probation or community service or time served. More hearings are ramping up at the county’s common pleas court this week, and a local judge said he hoped to soon release as many as 300 people from the jail, aiming to free up more space for quarantines at the facility if they are needed. “We know that eventually that virus is going to hit our jail,” Brendan Sheehan, the presiding judge of the county’s common pleas court, told Cleveland.com. “If that virus hits our jail, our jail will not be able to operate, and everything will be crippled.” Criminal justice reform advocates applauded the move: “Other jails should follow,” Udi Ofer, the director of the ACLU’s Justice Division, wrote in a tweet.

Some of those released in Cleveland had been arrested for nonviolent drug charges or poverty-related crimes. One woman who was jailed for drug possession pleaded guilty Saturday during her arraignment hearing; the judge allowed her to go home that day by sentencing her to time served. Another woman facing charges for fentanyl possession was sentenced to probation and drug treatment during her hearing. While the court prioritized punishments like these that allowed people to return to their communities, some defendants were sentenced to prison, where they will continue to face heightened odds of infection.

In San Francisco, meanwhile, attorneys are also trying to release more people from lockup. Last week, the city’s public defender announced his office would ask courts to immediately free anyone sentenced to county jail with less than six months remaining on their sentence, as well as all clients held pretrial who are at heightened risk for getting sick—a fairly large group, given that many people booked into jails have preexisting health conditions. The city’s new chief prosecutor, Chesa Boudin, said he would not oppose the release of pretrial detainees facing misdemeanor charges or drug-related felony charges as long as they pose no threat to public safety. He urged his team of prosecutors to help more people leave confinement early by offering plea deals that take into account the time they have already waited in jail.

Other jurisdictions around the country are trying to slow the speed at which people are jailed in other ways. Some are postponing nonessential criminal court hearings, unless the defendant is already in custody. Sheriffs in some counties are urging police not to put people into jail who are accused of nonviolent crimes or misdemeanors. State and federal prisons have also announced temporary bans on transfers between facilities or visits from family members.

But many criminal justice advocates say that won’t be enough, arguing that prison outbreaks will be unavoidable unless more drastic measures are taken. In New York, Brooklyn District Attorney Eric Gonzalez last week joined criminal justice advocates and public health experts in asking Gov. Andrew Cuomo to grant emergency clemencies to prisoners who are elderly or sick, as my colleague Madison Pauly reported last week. Some advocacy groups are now calling for their jurisdictions to follow the lead of the Ohio judges. “During this pandemic, incarcerated people are at increased risk of exposure and death,” the ACLU of Florida, Dream Defenders, and other criminal justice reform groups wrote in a statement urging courts in Miami to release more people from jails who have short sentences or are there pretrial. “Continued incarceration will be a death sentence.”