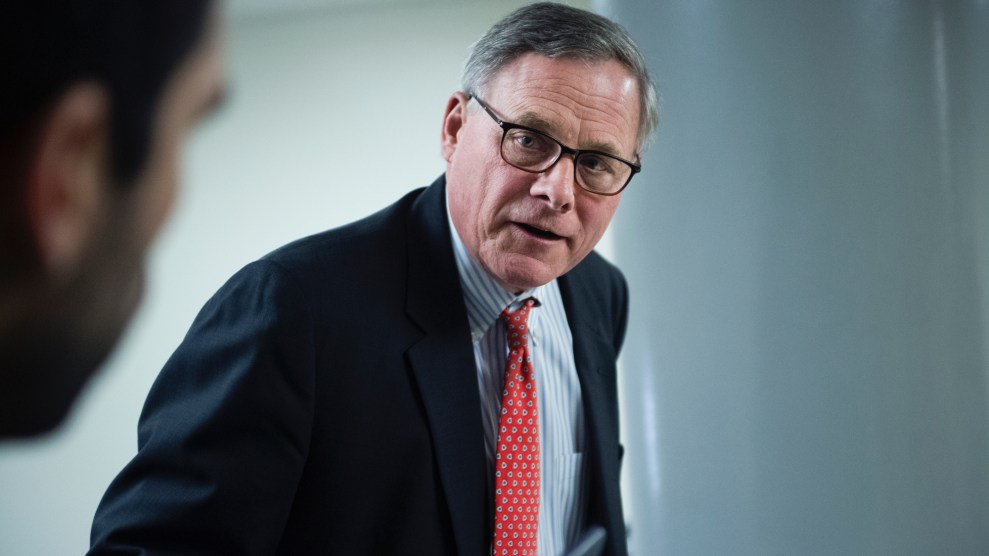 In the final days before the coronavirus pandemic crashed fully onto American shores, Sen. Richard Burr (R-NC), the chairman of the Senate Intelligence Committee, publicly tried to paint a rosy picture of our chances to fight the virus. He wrote op-eds and released statements, even going so far as to say the US was “lucky” to have a framework “that has put us in a better position than any other country to respond to a public health threat, like the coronavirus.” But, as first reported by NPR on Thursday, he was telling well-connected constituents that the United States was going to get clobbered.

But that’s not all Burr was doing.

According to reports Thursday afternoon from campaign finance watchdog Open Secrets and ProPublica, Burr and his wife also began selling stocks on February 13. A lot of stocks, in fact. According to OpenSecrets, the Burrs sold between $581,000 and $1.5 million in publicly traded stocks—and didn’t buy any new ones. And they didn’t sell just any stocks. They unloaded huge chunks of shares in companies that would soon see their stock prices crater as a result of the coronavirus chaos. As Open Secrets reports:

Between the Burrs’ two accounts, they sold up to $150,000 worth of stock in Wyndham Hotels & Resorts, which lost almost two-thirds of its market value since Feb. 13. They sold up to $150,000 in Extended Stay America, another hotel company that lost half its value over the last month. Burr also sold between $15,001 and $50,000 of stock in Park Hotels & Resorts, which saw its stock price drop from nearly $24 to under $5. The hotel industry is asking President Donald Trump for a bailout as Americans increasingly avoid travel.

Of course, Burr isn’t the only investor who decided to get out of the market at that point, but his position as Senate Intel chairman does give him access to a great deal of information not publicly availably, and his sales were extremely well-timed. According to ProPublica‘s reporting, Burr’s committee had begun receiving daily briefings on the coronavirus at some point in February, and just a week after his sales, the stock market began its steep decline. “Burr’s Feb. 13 selling spree was his largest stock selling day of at least the past 14 months, according to a ProPublica review of Senate records,” the story notes. “Unlike his typical disclosure reports, which are a mix of sales and purchases, all of the transactions were sales.”

One of Burr’s interests while in Congress has been pandemics, so he’s certainly no stranger to what they can mean for the economy. He was even one of the authors of the Pandemic and All-Hazards Preparedness Act, the major piece of legislation that guides the nation’s response to events like the spread of the coronavirus. Given this expertise and his chairmanship, Burr’s money moves certainly don’t look great. They may also be illegal. Like corporate insiders, members of Congress are prohibited from trading on information they have access to that the public wouldn’t. Craig Holman, a government ethics expert for watchdog group Public Citizen, says that Burr’s trades may have violated the Stop Trading on Congressional Knowledge (STOCK) Act of 2012.

“This has every appearance of insider trading and an egregious violation of the STOCK Act by Sen. Burr,” Holman says.

“His speech before a small group of paying constituents on February 27 painted a dire picture for the economy, while the administration and Burr were both publicly proclaiming a nonchalant, if not rosy picture. The information that Burr related to the small group was not general public information,” Holman says. “Burr apparently took his nonpublic information on the impact of the pandemic very serious, making 33 transactions in a single day on February 13, selling off his stocks to the tune of anywhere between $782,033 and $1.96 million. Burr recouped a fortune, while the rest of us continue to lose stock values.”

ProPublica notes that Burr was one of just three US Senators to oppose the passage of the STOCK Act in 2012. At the time he said the bill “wasted … taxpayer time and money.”

Burr’s Senate office did not immediately respond to requests for comment on his trades or concerns that they may have violated the STOCK Act.

“Maybe there’s an honest explanation for what he did, if there is, he should share it with the rest of us immediately, otherwise he must resign from the Senate and face prosecution for insider trading,” Carlson said.

Tucker Carlson calls for Senator Burr to resign and await prosecution for insider trading if he cannot provide a reasonable explanation for his actions. He goes on to say it appears that Senator Burr betrayed his country in a time of crisis pic.twitter.com/q7yJa5wjuA