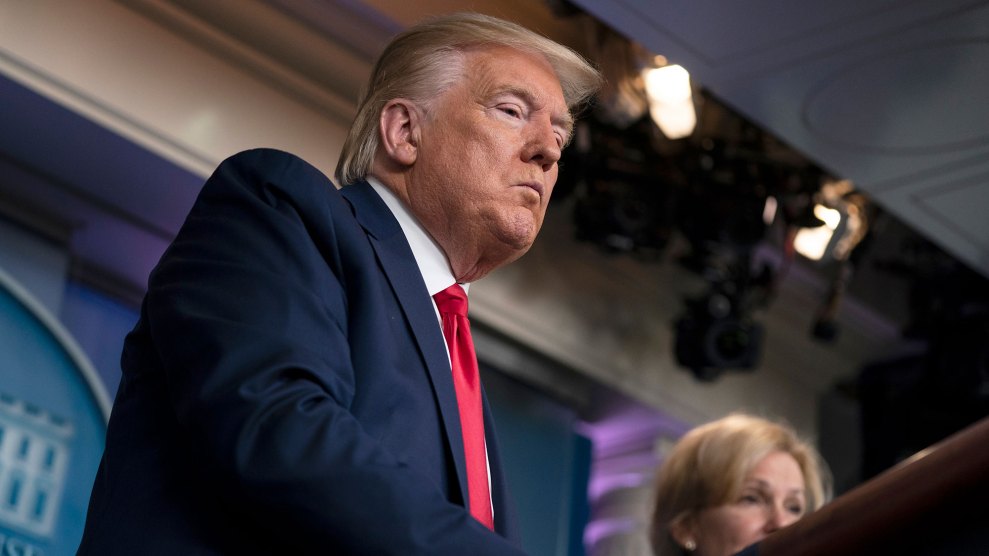 President Trump said in a press conference Wednesday that he will start turning back anyone crossing the US-Mexico border illegally—including those seeking asylum—”very soon, probably today,” to prevent further spread of the coronavirus.

The plans to immediately turn people back to Mexico instead of detaining them was reported by multiple news outlets Tuesday. The New York Times reported that agents would drive people to the nearest port of entry and return them across the border “without further detention.”

The Times report also noted that Trump would invoke a federal legal code that states that once the surgeon general determines that there is a serious danger of introducing a communicable disease from a foreign country, the government has the power to prohibit people “from such countries or places” to avert danger.

Of course, while Mexico has reported about 90 confirmed cases of the coronavirus, the United States has currently more than 7,000 confirmed cases. The Mexican government said Tuesday that it had not received any “formal request” from the US government regarding Trump’s announcement, and that if or when it does, it will have to “consider public health and human rights” in receiving people who are not part of the Migrant Protection Protocols (MPP) program.

Immigrant rights groups were quick to condemn the decision. “It is unbelievable that amid this global crisis, they remain consumed by this effort, using the pandemic as an excuse to turn back asylum seekers,” said Melissa Crow, senior attorney with the Southern Poverty Law Center. “Denying asylum seekers their rights will do absolutely nothing to solve this pandemic.”

For more than a year, the Trump administration has been sending tens of thousands of migrants back across the southern border through MPP, a.k.a. “Remain in Mexico.” Under MPP, most people seeking asylum are first detained by US Customs and Border Protection in temporary holding facilities at the border and then forced to wait in Mexican border cities for many months while their cases move through court. This has been the case for those crossing illegally and turning themselves over to Border Patrol, as well as for those who present themselves at ports of entry and request asylum. The policy does not apply to Mexican asylum seekers, and it has sent 60,000 people—mostly Central Americans—back across the border.