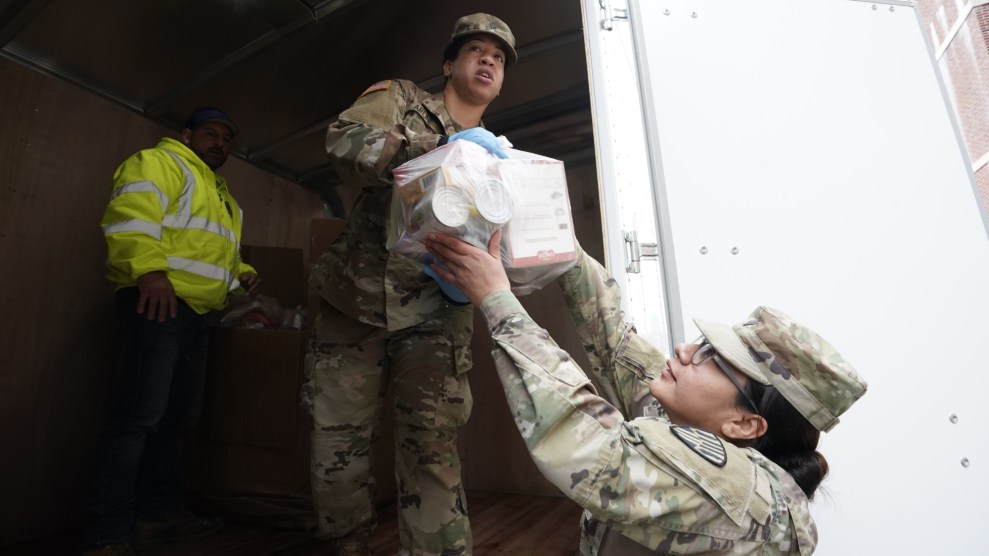 Members of the New York National Guard hand out food as part of the state's response to the coronavirus outbreak.Timothy A. Clary/AFP/Getty

Pressure is building on the Trump administration to deploy the US military to the front lines of the coronavirus crisis—and the Pentagon doesn’t seem to be thrilled about it.

“For years, we’ve trained to work in these dangerous environments.”

During Sunday night’s debate, Joe Biden called for the military to build field hospitals as the pandemic spreads across the United States. “They have the capacity to build 500-bed hospitals that are completely safe and secure, and provide the help to get it done,” Biden said, echoing comments Andrew Cuomo made earlier that day in a New York Times op-ed, in which the New York governor urged Trump to “task the Army Corps of Engineers to expand hospital capacity.”

On Twitter, Cuomo continued badgering Trump to involve the military in the federal government’s coronavirus response. The White House now appears to be warming up to the idea.

At a press conference Tuesday afternoon, Vice President Mike Pence said the Pentagon “could be helpful in terms of expanding medical capacity” and setting up field hospitals “that could be deployed very quickly.” Trump added that the Army Corps of Engineers will “probably supplement” New York as it confronts the daunting task of providing health care to thousands of residents seeking treatment. Cuomo said on Tuesday that he expects the state to need 55,000 to 110,000 hospital beds to deal with the virus, but that its current capacity is just for 53,000 beds.

Trump’s and Pence’s comments come only hours after Pentagon officials suggested that there was not a strong demand for the military to involve itself further in the federal coronavirus effort. Outside of assisting the federal government in quarantining US citizens returning from China or on cruise ships, Pentagon spokesperson Jonathan Hoffman said the department had “not received any other” formal requests for help. During a press conference, Hoffman and Air Force Brigadier General Paul Friedrichs, surgeon for the Joint Staff, lowered expectations for how effective a military response might be.

Could the Army Corps of Engineers construct hospitals? Hoffman said “we would look at” such an idea, but otherwise dismissed it. Military doctors are more accustomed to dealing with traumatic injuries and younger, otherwise healthy patients, he said. Older patients who are more likely to contract COVID-19 “require a different type of attention than we normally do.” Military doctors, if forced to regularly treat coronavirus patients, would also be at risk themselves. Two emergency physicians in Washington state and New Jersey are already in critical condition due to coronavirus.

Even if the hospitals were set up, Friedrichs said they would likely be limited in the kinds of care they could provide. “We want to be factual about what we have,” he said. “Our fixed facilities are designed to the force that we have. They’re not thousand-bed medical centers all over the United States. They’re, for the most part, small community hospitals.” Hospital ships like the USNS Mercy and the USNS Comfort have up to 2,000 available beds and could be used as a last resort, but they would probably not be able to accommodate the distancing required to treat coronavirus patients. Friedrichs said he would “feel uncomfortable” with the notion that a “hospital ship is designed to take care of highly contagious infectious disease patients.”

There’s a staffing problem too. Doctors and nurses would need to be brought in to address the inflow of people needing treatment and, while that movement of resources would almost certainly be possible, it would complicate the Pentagon’s efforts to maintain social distancing among its own staff. On Sunday, Deputy Defense Secretary David Norquist instituted a domestic travel ban for members of the military and DOD civilian employees until at least May 11, as nearly 40 service members have already tested positive for COVID-19. Much of the department’s gargantuan complex in Arlington, Virginia, is off-limits to visitors, and most Pentagon employees now working from home.

Without much in the way of answers from the US military, governors have already begun using Air and Army National Guard members in their states to deal with the crisis. By Friday, nearly 400 Guard personnel across six states had been activated; by Tuesday, that figure had rocketed to 1,560 members across 22 states, according to the National Guard Bureau. The lion’s share of the activated troops are in New York, where they have been tasked with distributing hand sanitizer, cleaning public buildings, and handing out food.

The need to maintain social distancing during the pandemic certainly complicates what Guard members can do to help, but “it’s very realistic” to expect them to build field hospitals and retrofit existing buildings—such as warehouses—into temporary care centers, retired Brigadier General Stephen Xenakis, a former Army medical officer, told me. “It’s why in a national disaster, you prepare the Guard to do that.”

Xenakis acknowledged that the current situation is undoubtedly a tough one, but he argued that the military is prepared to handle it. “For years, we’ve trained to work in these dangerous environments,” he said. “We’ve got special equipment to protect us.”