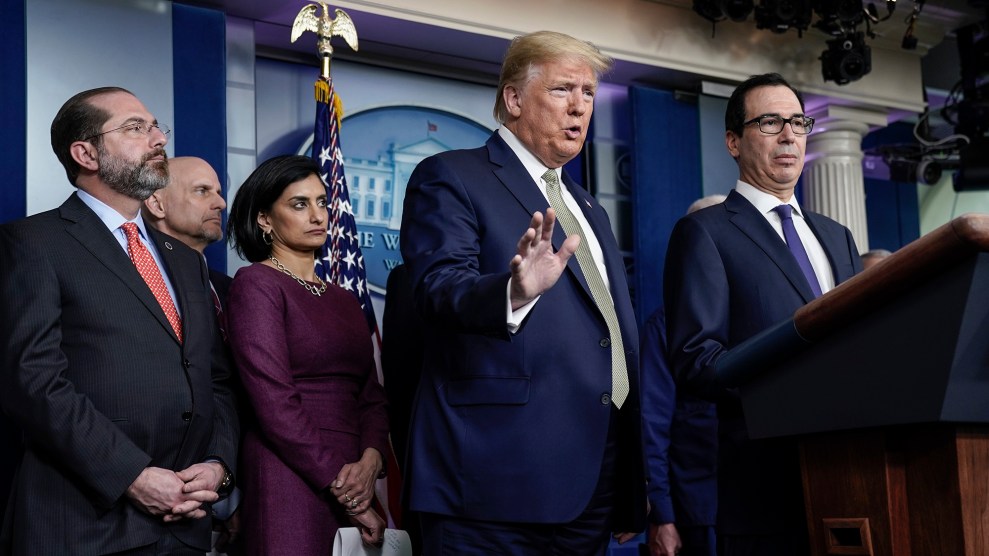 President Donald Trump and Treasury Secretary Steven Mnuchin, joined by members of the Coronavirus Task Force, field questions about the coronavirus outbreak in the press briefing room at the White House on March 17, 2020. Drew Angerer/Getty Images

Twelve years ago, Congress approved a massive bank bailout to keep the economy afloat in the midst of the financial crisis. That bailout is generally viewed as having been necessary, but it has also been criticized for what the Bush and Obama administrations failed to do: dedicate sufficient resources to helping the people who lost their homes and jobs because of Wall Street’s recklessness. As the country faces another economic meltdown and possible recession, some lawmakers are pledging not to make the same mistake twice—they want to ensure that the enormous relief packages being crafted by Congress and the Trump administration prioritize policies that will actually help cash-strapped Americans.

There’s no guarantee they’ll be successful. For days, the White House seemed to prioritize efforts to bail out oil companies, struggling airlines, and other travel-related industries, while promoting fiscal stimulus policies—particularly a payroll tax holiday—that would flow disproportionately to the wealthy.

By contrast, Senate Democratic Leader Chuck Schumer has proposed a $750 billion spending bill that includes boosting “hospital capacity, unemployment insurance, affordability of coronavirus treatments, forbearance of all federal loans, small business assistance, child care, remote learning, food delivery and public transportation costs, among other provisions,” according to the Huffington Post. A bill passed by House Democrats would include paid sick leave, but it had major carveouts that would exclude millions of workers.

At the same time, a bipartisan consensus has begun to emerge around the idea of making direct cash payments to millions of Americans. On Monday, Sen. Mitt Romney (R-Utah) proposed a one-time payment of $1,000 to all American adults. Meanwhile, a group of Democrats has gone much further, suggesting $2,000 checks for adults and children—with a possibility of additional $1,500 and $1,000 checks over the course of the year, depending on the length of the crisis.

On Tuesday, the Trump administration began to come around to the idea of direct payments. “We are looking at sending checks to Americans immediately,” Treasury Secretary Steve Mnuchin told reporters. “Americans need cash now.”

One practical question facing lawmakers is whether to send the checks to everyone or only to those who need it most. Romney’s proposal would be universal. The Democratic version, on the other hand, would phase out payments for some high-income earners. The White House has also suggested a means-tested approach. “I think it’s clear we don’t need to send people who make $1 million a year checks,” Mnuchin said Tuesday.

But the logistics of how exactly means testing would work remain unclear. In normal times, Congress would “try to identify the people who need it and those who don’t and do a very careful parsing,” says Joseph Stiglitz, a Pulitzer Prize-winning economist and proponent of progressive economic policies. “But we don’t have time to do that. More than half Americans live basically hand-to-mouth, don’t have much in the bank.”

Instead, Stiglitz suggests sending a $2,000 check to every American—adults and children—right away. The government could then recoup money that went to the wealthy through next year’s taxes. “Get a check to everybody,” he says, then “in 2021, when [you] fill out your tax return, you’ll do a reconciliation, and those who got money who didn’t really need it will pay it back.” Gene Sperling, a former economic adviser to Presidents Bill Clinton and Barack Obama, has suggested the same tactic.

Though Mnuchin didn’t say how much cash the administration wanted to send to Americans, the fact that President Donald Trump is coming around to the idea is a big deal. Over the past week, Trump has focused largely on a payroll tax holiday, a favorite policy of conservative economists. As of Tuesday morning, the payroll tax cut—which would suspend paycheck deductions for Medicare and Social Security, as well as the share paid by employers—was still a major piece of the administration’s proposed $850 billion stimulus, despite the fact that it is uniquely unsuited to the current crisis. The more you earn, the more you pay in taxes, so the cut would disproportionately benefit people drawing larger paychecks. That also makes it a relatively ineffective means of economic stimulus—wealthier Americans are less likely to spend the additional money they receive. And since this is a tax cut for wage earners, those who have lost their jobs would not be helped.

Another question facing lawmakers is whether to bail out industries hit hard by the downturn, including the airlines. Trump signaled Monday that he would “back the airlines 100 percent,” and Politico reported aid to the airline industry as another part of the administration’s proposed relief package. Major airlines have suggested around $50 billion in aid would be needed, including grants and low- or zero-interest loans.

Progressives are more circumspect. They point out that the airlines are in dire straights now despite 10 years of record profits because they sent that money straight to their CEOs and shareholders.

96% of airline profits over the last decade went to buying up their own stocks to juice the price – not raising wages or other investments.

If there is so much as a DIME of corporate bailout money in the next relief package, it should include a reinstated ban on stock buybacks.

“One thing that is discussed extensively is the bailouts for the airlines,” says Stiglitz. “I have no sympathy for that. They paid out billions of dollars in share buybacks. They should have thought about what happens in a rainy day.” If the government does decide to bail them out, he says, the money should come with the right to buy stock so that if any of the airlines fail to repay the loans, the government can take over the company and then resell it again to earn back its investment. “The public has to be compensated for the risk,” he argues.

Such a policy would also incentive smart use of the money. “If they’re not going to lose ownership,” Stiglitz says, “they have to make sure that they they don’t pay out dividends and don’t pay their CEOs outrageous salaries, but they actually reinvest in the company.”