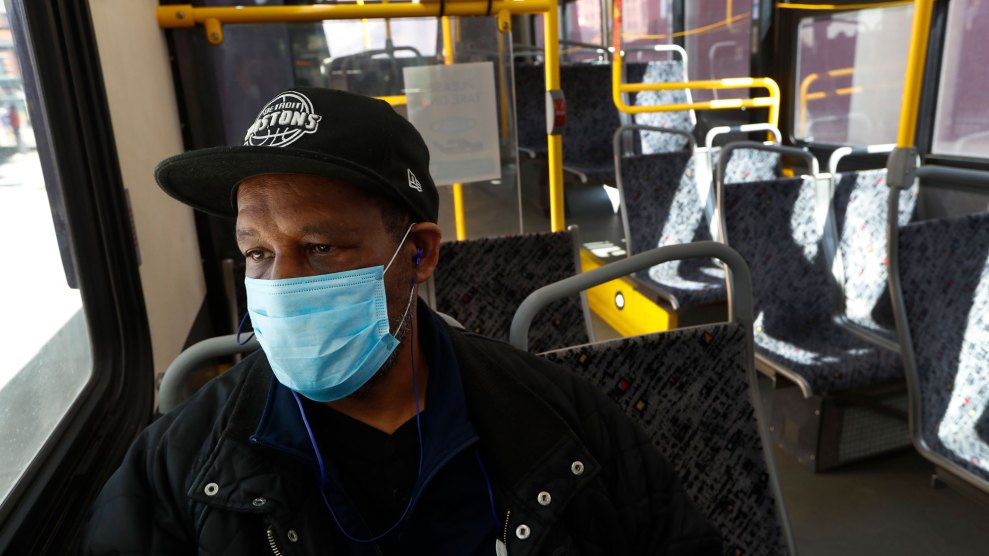 Albert Dowdell wears a protective mask on a bus during the COVID-19 outbreak in Detroit.Paul Sancya/AP

The coronavirus deals out death and despair unequally across America. Scientifically speaking, the virus can infect anyone. But as epidemiologist Camara Jones recently told Mother Jones, “the disease discriminates in how profoundly those people are affected.”

In early April, Mother Jones began requesting racial and ethnic breakdowns of COVID-19 infections and deaths from health departments in all 50 states and the District of Columbia. Of those, 21 states released no racial or ethnic breakdowns of those infected. Twenty-six states failed to release breakdowns of fatalities by race, and among the states that did, the information was inconsistently formatted. Some broke out data only by race, others only by ethnicity, and some by both. Some offered data for Latinx and Asian communities; others classified them as “Other.” Most states had little if any information about how Latinx, Asian, and Native American populations have been affected.

But a clear picture did emerge. Preliminary data analysis by Mother Jones finds that Black people overall have disproportionately contracted and died from the coronavirus. In 20 of the 28 states plus DC for which a usable racial breakdown of infection data was provided, Black people make up a larger share of coronavirus infections than they do of the general population.

Similar data for Latinx populations is hard to come by. What we do have shows that Latinx people are dying at much higher rates in New York City relative to their share of the population but not in any of the places that provided relevant breakdowns.

Civil rights groups, medical professionals, and lawmakers have pressured the Centers for Disease Control and Prevention to release data on who is infected and who dies from the coronavirus by race and ethnicity. The CDC has since released racial data on 10 states.

There is no one cause of the racial disparities, says Thomas LaVeist, dean of the Tulane School of Public Health & Tropical Medicine. The list of possible culprits is long. Black Americans are more likely to work jobs that are considered essential—they’re grocers, fast-food workers, transit and postal workers. As a result, they risk greater exposure to the disease. Black people in the North tend to live in dense, historically segregated cities—Milwaukee, St. Louis, Detroit, Chicago—in which disease can spread quickly. Black people in the South, Louisianans excepted, live in states that did not expand Medicaid, leaving many of them uninsured. (A Mother Jones analysis found that six of the country’s 10 most vulnerable states, according to something called the “COVID-19 Community Vulnerability Index,” are located in the South. In Mississippi, where 90 percent of counties are particularly vulnerable, Black people make up 38 percent of the state’s population and a startling 66 percent of COVID-19 fatalities.) Owing to factors like the siting of toxic dumps and new highways, Black people suffer disproportionately from underlying health conditions such as asthma and heart disease that elevate the risk of death in coronavirus patients.

“We can’t forget how racially segregated this country is by design.” LaVeist says. “This is an outward manifestation of structural racism where African Americans are at an increased risk.”

Citing the disparities in disease rates and outcomes between Black and white Americans, Clyde Yancy, chief of cardiology at Northwestern University’s Feinberg School of Medicine, calls this a “moment of ethical reckoning” in an editorial in the Journal of the American Medical Association. He points out that infection rates were three times higher in counties with mostly Black people than in predominantly white counties.

What’s more, predominantly Black counties saw a sixfold higher death rate than mostly white counties. “A 6-fold increase in the rate of death for African Americans due to a now ubiquitous virus should be deemed unconscionable,” Yancy writes.

“The scourge of COVID-19 will end, but health care disparities will persist.”