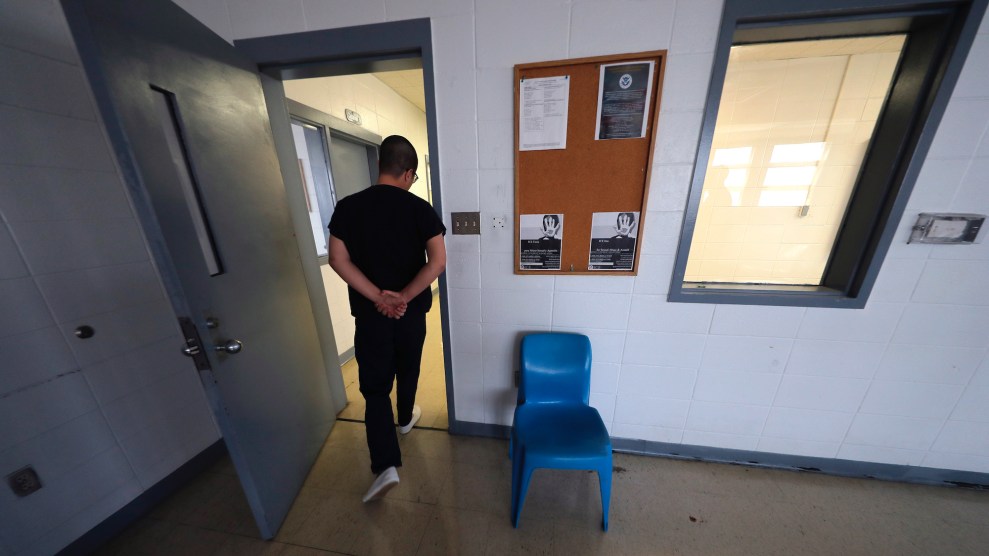 Another person being detained by Immigration and Customs Enforcement has tested positive for COVID-19, according to the sheriff of the Louisiana parish where the man was in custody. There are now at least 14 detainees across nine ICE detention centers who have tested positive.

LaSalle Parish Sheriff Scott Franklin wrote in a Facebook post Monday afternoon that a detainee at the LaSalle Correctional Center in Olla, Louisiana, tested positive on Sunday. In the post, he noted that the ICE detainee with COVID-19, along with all of the other detainees in his dorm, were “shipped” to an unspecified facility that has a “dorm set up for quarantine.”

ICE spokesman Bryan Cox did not confirm the new case, but said the agency is updating the number of people in its custody who have tested positive on a daily basis. He noted he was not contradicting Sheriff Franklin but said he didn’t want to get ahead of the daily update.

“We should all be acting like everyone has the virus and follow all the CDC protocols,” Franklin wrote in his Facebook post. It is generally impossible for ICE detainees to follow the CDC’s recommendations on social distancing because they are crowded into dorms with dozens of other people. Franklin, who has not responded to a request for comment, added in his post, “Prayers for the other inmates, employees and their families are greatly appreciated.” 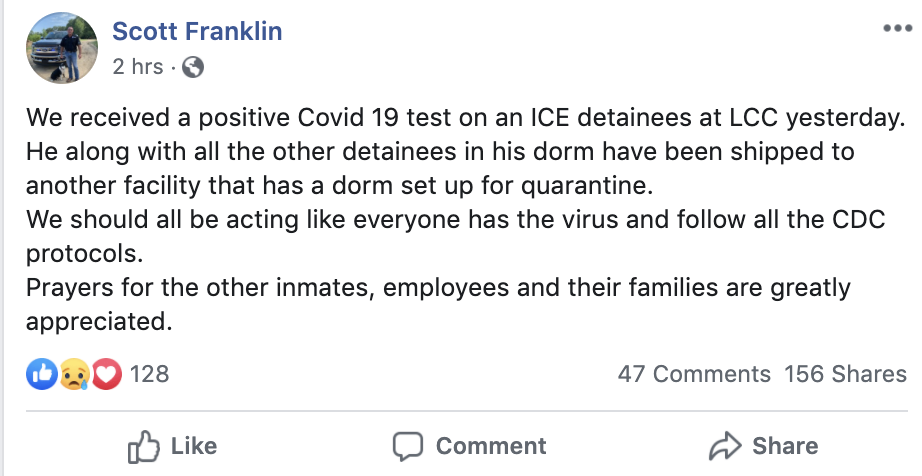 Documents I obtained through a public records request show that ICE was paying LaSalle Parish $76 per night per detainee as of last summer. The parish acts as a middle man, while LaSalle Corrections, a for-profit prison company, manages the day-to-day operation of the jail. Like other LaSalle Corrections facilities in Louisiana, the jail was built to hold criminal inmates. The company’s website states that the jail can hold 755 people.

The news Monday comes just days after ICE announced another detainee had tested positive for COVID-19 in Louisiana—a 52-year-old Mexican national who was being held at a facility run by the private prison company GEO Group in Pine Prairie, about 80 miles south of LaSalle Parish. The detainee was asymptomatic and being quarantined, the Lafayette Daily Advertiser reported Friday night.

This man, according to Cox, the ICE spokesman, had recently come into ICE custody from a federal prison near Oakdale, Louisiana. Cox said on Friday that the man was transferred wearing a mask and gloves. The Oakdale prison has been ravaged by the new coronavirus; five inmates have died from COVID-19, while at least 25 inmates have tested positive.

Louisiana is emerging as one of the world’s worst coronavirus hotspots. The state is now reporting 512 deaths from 14,867 cases of COVID-19; for reference, California has reported 372 deaths from 15,823 cases. As Molly Hennessy-Fiske of the Los Angeles Times noted on Twitter, California has nearly ten times as many people as Louisiana.