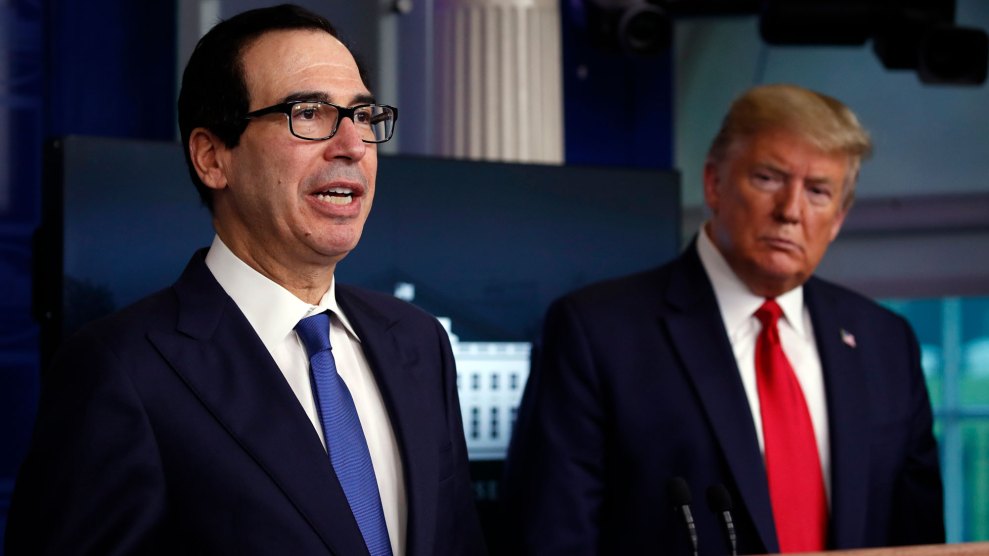 During a Sunday morning appearance on CNN in which he said he was “hopeful” a deal on another coronavirus relief bill could come soon, Treasury Secretary Steve Mnuchin wanted to clear up another matter: It was his idea, he told host Jake Tapper, to put President Donald Trump’s name on millions of stimulus checks.

“The President could have been authorized to sign the checks—that would have slowed things down,” Mnuchin said. “We didn’t want to do that. We did put the President’s name on the check—that was my idea. He is the president, and I think it’s a terrific symbol to the American public.”

"That was my idea" — Steve Mnuchin tells Jake Tapper that he, not Trump, was the one who wanted to put Trump's name on coronavirus relief checks pic.twitter.com/ubk40UUK75

Mnuchin’s comments echo reports from the New York Times and Washington Post that the move to put Trump’s name on the checks came at the behest of the Treasury Department. As the Post reported last week:

While Trump has spent recent weeks talking with friends and supporters about his coronavirus response and his reelection campaign, the effort to place his name on the checks was largely kept secret until this week, with top White House officials in the dark until the plan became public. The White House press office did not respond to requests for comment Wednesday.

Some senior officials at the IRS did not find out about the plan until Tuesday morning, underscoring the unorthodox process that has turned Trump’s desire into reality.

After privately suggesting to Treasury Secretary Steven Mnuchin that he be allowed to formally sign the checks, Trump settled for having his name printed in the memo section, according to administration officials, who spoke on the condition of anonymity to discuss internal deliberations.

Meanwhile, the impending $400 billion deal between the Trump administration and congressional Democrats would send $300 billion to a small business loan program, $75 billion to hospitals, and $25 billion toward testing. But even as congressional Democrats have requested more money to be sent to states directly, Mnuchin argued that the federal government already had “a lot of money that we’re distributing to the states.”