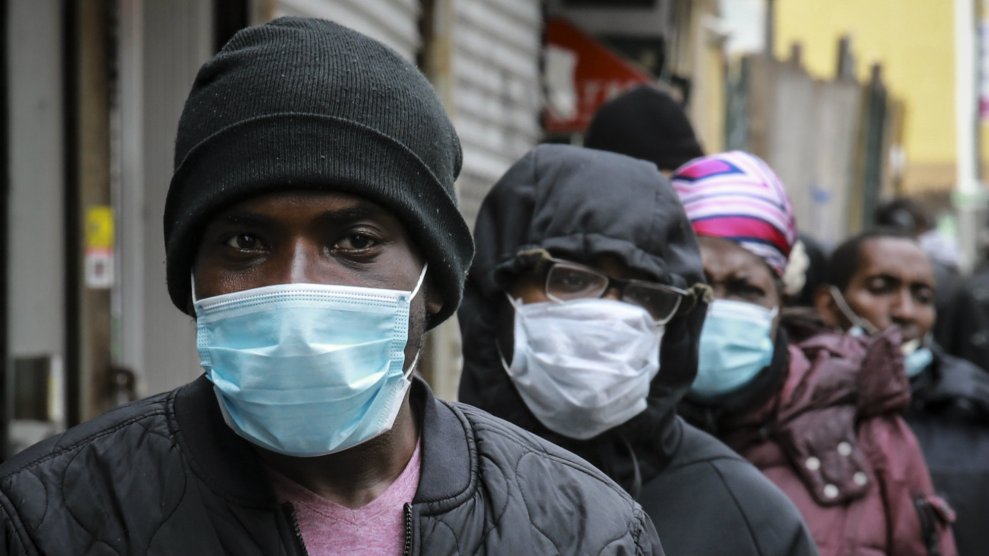 Jelani Anderson formulated a plan before stopping to buy water at a convenience store in New Jersey. The 52-year-old Black man works as a safety professional and inspects construction sites all over the state. “I needed to make a stop to use the bathroom and get a water to maintain hydration,” Anderson told me in an email. “Given the difficulty in buying masks in this area, I only had a bandana to use as a nose and mouth covering.”

Anderson knew that the combination of racism and stereotyping means a Black man walking into a store with his face covered in a bandana could have an unfortunate outcome. He decided to keep on his reflective vest and work boots so he’d be easily identified as someone who, as he said, “belongs,” and to speak in a friendly tone to everyone near him. “This is not a time to startle an inattentive cashier or security guard by popping out of nowhere while being a Black man,” he explained. Anderson also decided to check his surroundings for any police officers and let a friend know he was about to make a stop.

The trip was uneventful; Anderson was able to take care of his business with no problems. But still, he was frustrated. “I was a bit angry by the extra tax I had to pay as a Black man,” he wrote, “devoting time and energy to not be overwhelmed by the anxiety of simply trying to protect myself and others from illness.”

“I was a bit angry by the extra tax I had to pay as a Black man, devoting time and energy to not be overwhelmed by the anxiety of simply trying to protect myself and others from illness.”

It’s a feeling that is replicated across the country. The health effects from COVID-19 are disproportionately killing Black people. The United States has the highest rate of infection and death toll in the world. According to an investigation by my colleagues Edwin Rios and Sinduja Rangarajan, “In 20 of the 28 states plus DC for which a usable racial breakdown of infection data was provided, Black people make up a larger share of coronavirus infections than they do of the general population.”

They also face the additional threat of being seen as threatening when wearing a protective mask. “Some of the historical stereotypes about Blacks, particularly Black men, are related to criminality…strength and physicality, and these are stereotypes to supposedly be scared of,” Rashawn Ray, a sociologist at the University of Maryland, explained in a video for the Washington Post. When non-Black people who are unfamiliar with other races interact with Black people, those stereotypes can be at the forefront of their minds. “When they see Black men exhibiting a particular script, in this case, wearing a mask,” he noted, “what it signals to people is that they are trying to rob the store.” Ray said many Black people are making the same decisions as Anderson before going into essential businesses: “When Black men are getting ready to go out to a store to get essential goods for themselves and their families, they have to go through what I call a signaling process: ‘What are better ways that I can signal to people that I’m not a criminal?'”

In March, the Centers for Disease Control and Prevention advised that given the global shortage of personal protective equipment, masks should be reserved for health care workers. The agency also said that wearing a mask was unlikely to protect you from contracting the virus. Earlier this month, they reversed course and urged the public to cover their faces with some type of mask, including DIY cloth masks, when venturing out to the grocery store, to essential businesses, or public places. Some states are even requiring them in retail businesses, turning away anyone whose face isn’t covered up. An April 17 Gallup poll showed that 62 percent of Americans had worn masks in public in the last week.

For Black people, the familiar anxieties of simply existing in public intensified. Especially after a video from Wood River, Illinois, went viral. It depicted two Black men wearing masks being asked to leave a Walmart.

These fears and anxieties are not just anecdotal—they have some scientific research behind them. A 950-person experiment in 2017 by John Wilson, a psychologist at Montclair University, found consistent racial biases in participants. The group included multiple races and asked several questions related to race and perceptions. All of the respondents believed that Black men were larger and more powerful than same-sized white men. They also believed that the Black men were more likely to cause harm in an altercation and that police would be justified in using force against them. Black respondents also believed Black men were stronger and larger, but they did not believe they were capable of causing more harm or were deserving of more police force. Wilson concluded that these findings could explain why Black men are more likely than white men to be shot and killed by police, explaining “this research suggests that misperceptions of black men’s size might be one contributor to police decisions to shoot.”

A 2019 Washington Post study showed that Black people were disproportionately killed by police compared to white people, between the years 2015 and 2019. In addition, they found that Black men are more likely to be fatally shot while unarmed. So, it’s no surprise that Anderson, Young, and other Black men are weary of making themselves even more of a target for biased police officers.

But it’s not just the men who worry. Black women also have experienced racial profiling and violence just for existing in public while being Black. “My mind instantly went to Sandra Bland,” Alaia Williams, a 35-year-old Black woman who works as a business operations strategist in the Los Angeles area told me, referring to the woman in Texas who died in jail after getting stopped and arrested in 2015. The thought of getting pulled over by police for no reason and having that action escalating into tragedy crossed Williams’ mind plenty of times in the past. Now, the thought of driving with her face covered  has added to her anxiety. “If you’re Black doing anything, you can be profiled,” she said. “There’s this anxiety that comes with it, regardless of your gender.”

For many Black people, weighing whether or not to wear a mask comes down to deciding whether or not to risk getting racially profiled, which could turn deadly, or contracting COVID-19, which could also turn deadly. “Am I going to risk my health or am I going to risk it all and pray that no one in this open-carry state mistakes me for a volatile?” George Wesley, a Black man from Newport News, Virginia, told me. The 32-year-old freelance video editor and graphic designer alters his behavior depending on his surroundings. At a grocery store with diverse patrons, he feels comfortable wearing his mask. But if the store is mostly white, he tries a different approach. “I will take my mask down to make them feel comfortable, compromising my health,” he says. “Black with a mask is a gamble.”