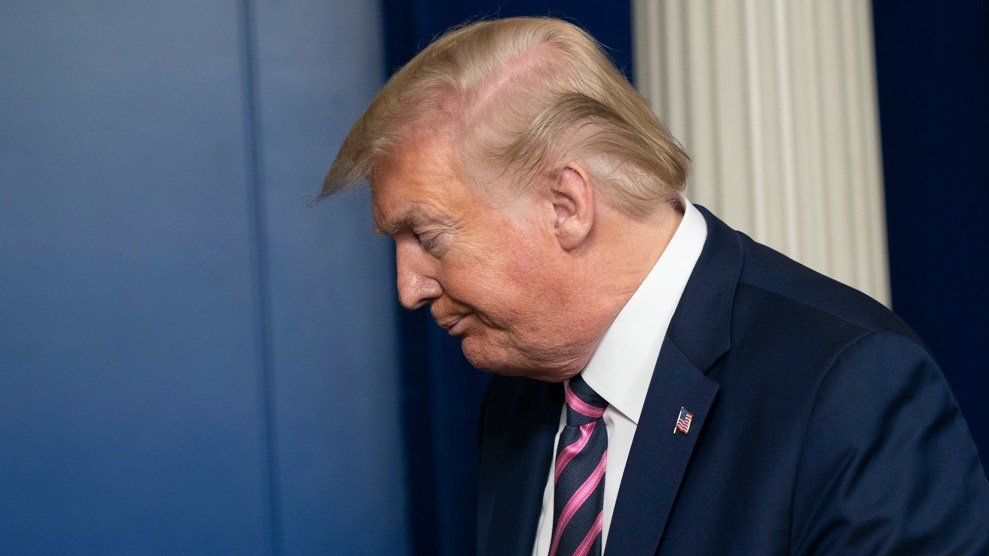 As Americans continued to roll their eyes at his comments about injecting disinfectant to kill the coronavirus, President Donald Trump mainlined a fresh dose of misinformation and grievance into his Twitter stream yesterday.

First, he continued to try to relitigate his widely mocked press briefing on last Thursday, claiming his widely mocked suggestions were not directed at Dr. Deborah Birx, the response coordinator for the White House Coronavirus Task Force, but William Bryan, the Department of Homeland Security undersecretary for science and technology.

Was just informed that the Fake News from the Thursday White House Press Conference had me speaking & asking questions of Dr. Deborah Birx. Wrong, I was speaking to our Laboratory expert, not Deborah, about sunlight etc. & the CoronaVirus. The Lamestream Media is corrupt & sick!

Trump did ask Bryan whether UV light could be used to “hit the body” or somehow used “inside the body, which you can do either through the skin or in some other way.” But he also addressed Birx directly when he said, “I would like you to speak to the medical doctors to see if there’s any way that you can apply light and heat to cure…Deborah, have you ever heard of that? The heat and the light, relative to certain viruses, yes, but relative to this virus?”

Next, Trump suggested that he’d soured on press briefings because the media “refuses to report the truth of facts accurately.” (By the way, the quotes in the previous paragraph are verbatim from the White House website.) Nearly a month ago, he’d bragged that his daily briefings had made him “a ratings hit.” Now Republicans are worried that his briefings are hurting them politically; one senator told the New York Times “the nightly sessions were so painful he could not bear watching any longer.”

What is the purpose of having White House News Conferences when the Lamestream Media asks nothing but hostile questions, & then refuses to report the truth or facts accurately. They get record ratings, & the American people get nothing but Fake News. Not worth the time & effort!

Remember, the Cure can’t be worse than the problem itself. Be careful, be safe, use common sense!

Finally, Trump claimed that the Democrats and media have falsely accused him of calling the coronavirus pandemic “a Hoax.”

I never said the pandemic was a Hoax! Who would say such a thing? I said that the Do Nothing Democrats, together with their Mainstream Media partners, are the Hoax. They have been called out & embarrassed on this, even admitting they were wrong, but continue to spread the lie!

Let’s look at the transcript from the president’s rally in North Charleston, South Carolina, on February 28 (italics mine):

So far we have lost nobody to coronavirus in the United States. Nobody. And it doesn’t mean we won’t and we are totally prepared. It doesn’t mean we won’t. But think of it, you hear 35 and 40,000 people [dying from flu] and we’ve lost nobody. You wonder if the press is in hysteria mode… Now the Democrats are politicizing the coronavirus. You know that, right? Coronavirus. They’re politicizing it… And this is their new hoax. But you know we did something that’s been pretty amazing. We have 15 people in this massive country and because of the fact that we went early, we went early, we could have had a lot more than that.

If you read that and conclude the president was minimizing the seriousness of an impending public health crisis by accusing the media and Democrats of exaggerating its dangers, perhaps you don’t recognize sarcasm.