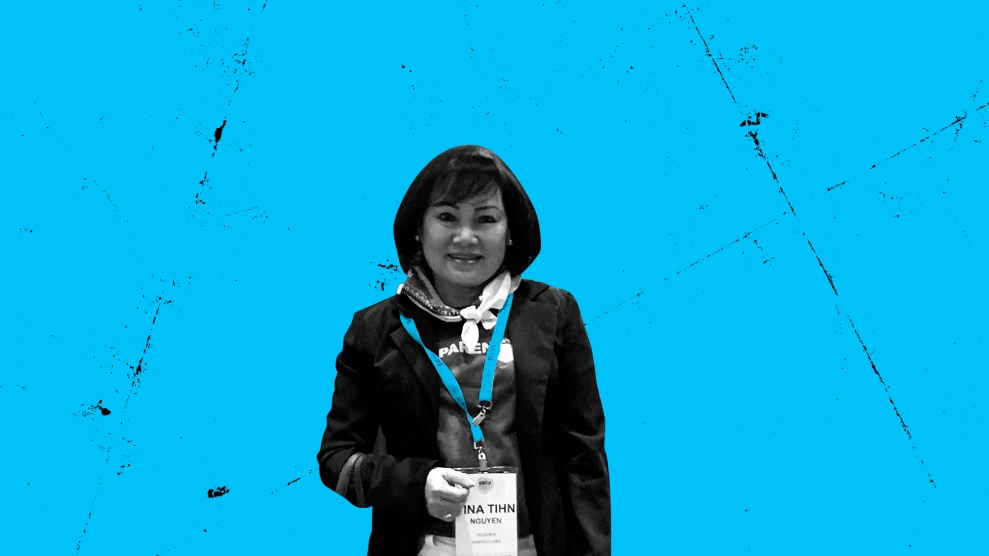 Like many reporters in the coronavirus era, I find myself constantly dialing in to press conferences and joining video Q&A sessions to scout leads and meet new sources. But on a recent call with immigrant rights groups and the Service Employees International Union One, there was one speaker—a Vietnamese American home care worker named Tina Nguyen—whose prepared statement about her experience of the pandemic really stuck with me, because it centered around fear: of the virus, of racism, of violence.

So several days later I called her at home in San Jose, California. The 69-year-old Nguyen, who moved to the United States from Vietnam almost 30 years ago and currently serves as a vice president for her local SEIU chapter, was quick to apologize for her perfectly fine English. After some small talk, I asked her to elaborate on something she’d said during the press conference, about how she’d changed her routine when she leaves the house these days.

“First,” she told me, “I have to check for safety, for security, because maybe there’s someone in this crisis that needs money and could rob me or attack me.” Second, “I look around to make sure I’m keeping the social distance correctly,” and that other people are, too. If they aren’t, Nguyen said, she quickly reminds them to stay six feet away. “The third one is serious,” she said, slowing down a bit as she spoke. “I have to look around to see the attitude of people around, to look in their eyes to see if they may attack me because I am an Asian.”

“I have to look around to see the attitude of people around, to look in their eyes to see if they may attack me because I am an Asian.”

Her fears of being targeted are real. When coronavirus cases started to spread across the United States, so did incidents of racist acts against Asian Americans. In response to the “alarming escalation in xenophobia and bigotry,” civil rights groups established a reporting center to capture firsthand accounts of harassment, violence, and discrimination against Asian Americans and Pacific Islanders. In a four-week period, Stop AAPI Hate received more than 1,400 incident reports: everything from rideshare drivers refusing service and speeding off to strangers coughing and spitting while yelling things like “fucking Chinese disease.” All of this has added an extra layer of stress to pandemic life for many Asian American communities. What’s happening right now “makes me more scared, and it makes me have to be more careful,” Nguyen told me. “Racism happened sometimes,” she told me, but “in this pandemic it’s worse.”

While Nguyen herself hasn’t faced any overt racism during this crisis—perhaps, she told me, it’s because she barely leaves her house—people close to her have been harassed, and she has gotten a few “looks” from people who are not Asian. She said a friend, who is also Vietnamese, told her about getting harassed when she was in line at the bank, causing her to leave without taking out the money she needed. Nguyen said her daughter-in-law came home a couple of weeks ago and shared that a man standing in front of her at the grocery store had turned around to give her a look. “He didn’t yell, but the way he looked at her…like, ‘You Asian!'” Plus, Nguyen was affected by a story she saw on the news of an Asian man assaulted in San Francisco by a man who yelled, “I hate Asians.”

“Asian people cannot be treated like that,” Nguyen said. “If we do something wrong, that’s maybe okay, we get yelled at. But we didn’t do anything wrong. We’re innocent people. We should not be treated that way.”

“We didn’t do anything wrong. We’re innocent people. We should not be treated that way.”

Nguyen and her family have been sharing stories about xenophobia at the dinner table, and she’s been reminding them that they need to be constantly alert—but not to panic. She told me that even as an older, quite short woman, she has learned what to do if she anticipates being attacked. She even has learned some moves from watching Vietnamese self-defense videos on Facebook and has run through scenarios in her mind for when it’d be a good time to run or fight back.

Nguyen also has been talking frequently with other union members to keep occupied and tries to not let the current situation get her too down. She said that she’s constantly reading the news and looking at the national and global death counts, so I asked her what she does when she needs to disconnect from reality for a moment. “When I don’t feel so good, I listen to music,” she said, adding that she’s even been sending her friends YouTube links to some of her favorite performances. (I’ll admit that I was a bit surprised that the links she later shared with me were of an older, heavily bearded man singing covers of ‘80s power ballads.)

Before we ended our call, Nguyen said she wanted to encourage other Asian Americans to report any racism or violence they experienced to the authorities: ‘They should raise their voice so we can raise our voice—and help get it stopped, so they don’t suffer by themselves only.'”