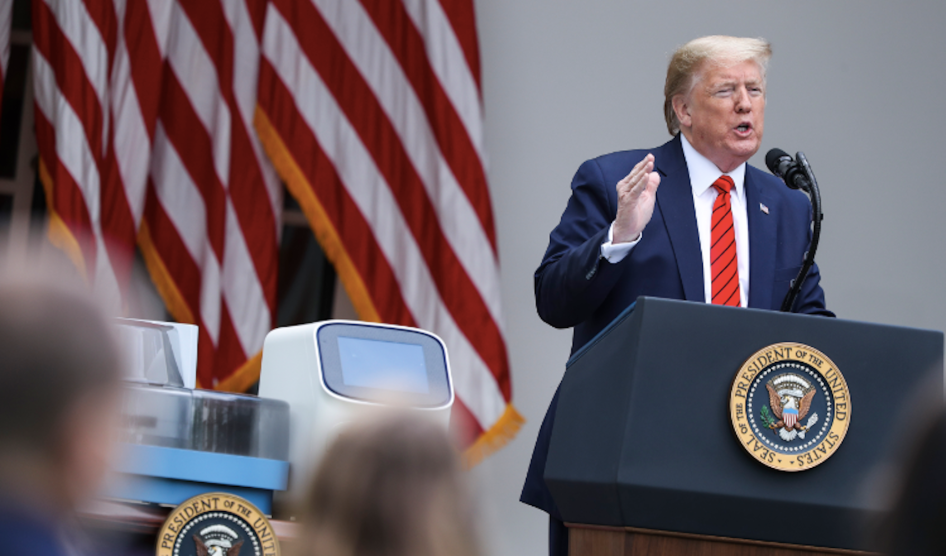 President Trump’s abrupt exit from a White House news conference Monday afternoon felt instantly familiar. It was, after all, hardly the first time he had gone after a female reporter. Nor was it Trump’s first go at targeting a woman of color with racist rhetoric.

The president seemed set off by a question from CBS reporter Weijia Jiang—”Why are you saying that to me, especially?”—that she lodged seconds after Trump suggested Jiang, an Asian American, ask China about his compulsion to frame coronavirus tests as some kind of global competition.

“I’m saying that to anybody who would ask a nasty question like that,” Trump shot back.

But his grim facial expression—and subsequent refusal to take another question from Jiang’s White House press corps colleague, CNN reporter Kaitlin Collins—appeared to belie that very explanation. For just a few moments, Trump seemed to recognize that he had, once again, done an oopsie dog whistle.

Still, Trump couldn’t let a very public tantrum be the last word. Hours after walking out of the news conference, he dashed off to his mental safe space and declared conspiracy:

The Lamestream Media is truly out of control. Look how they work (conspire!) together. They are the Enemy of the People, but don’t worry, we will WIN in November! https://t.co/3YOSChXP9M

By the next morning, Trump was retweeting praise for his behavior, and claiming, without evidence, that Asian Americans shared his fury with China’s actions in the coronavirus pandemic.

This whole timeline reads like a nightmare, but we shouldn’t ignore the president baselessly accusing female reporters of taking part in a political plot to tank his reelection after getting called out for racism. Trump’s meltdown came at the same time he relaunched a conspiracy-fueled campaign claiming Barack Obama has committed “the biggest political crime in American history,” a wildly absurd accusation that came after Trump reportedly was angered at the former president calling his coronavirus response “an absolute chaotic nightmare” during a private phone call. Taken together, the attacks capture our thin-skinned president turning back to the greatest hits of his political career—racism, misogyny, conspiracy theories—to distract attention and responsibility from a public health crisis that crossed 80,000 deaths over the weekend.