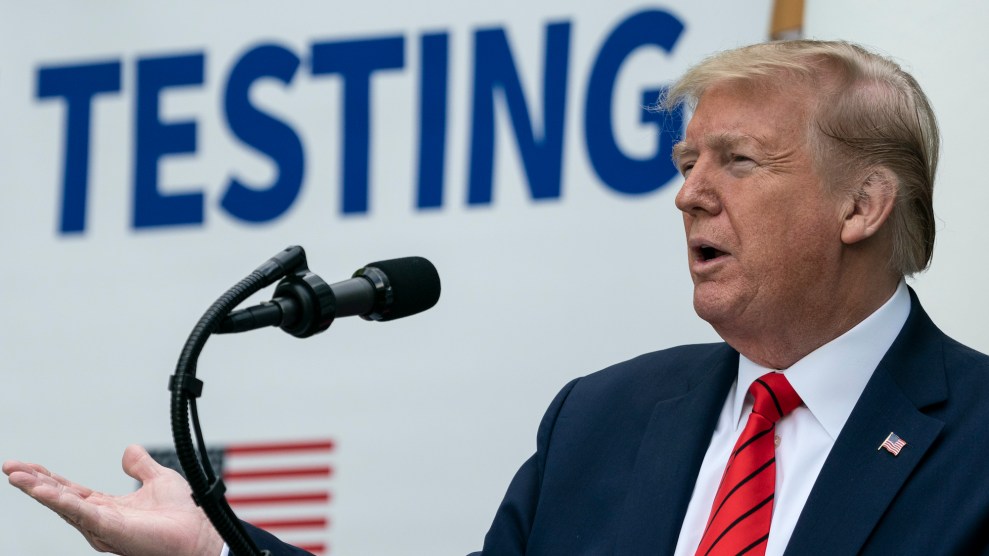 This afternoon, President Donald Trump held a briefing in the White House Rose Garden to trumpet the expansion of the United States’ coronavirus testing capacity—and to double down on the inaccurate claim that anyone who wants to get a coronavirus test can get one. “If people want to get tested, they get tested,” Trump said. “But for the most part they shouldn’t want to get tested.” He then added that only people experiencing symptoms of COVID-19 should want to get a test.

“We have met the moment and we have prevailed,” Trump announced, flanked by banners declaring “America leads the world in testing.” He tried again to spin the total numbers of tests done as the best measure of the country’s ability to track the coronavirus. Pressed on whether it is true that tests are available to any American who wants one, he said, “It is a true statement already. We have more testing than anyone by far.”

The United States has completed more than 9 million tests and more than 300,000 people are currently being tested daily. Experts think that anywhere from 500,000 to 20 million daily tests are needed to safely reopen the economy.

Even the basic numbers offered at today’s briefing were murky. Trump said the country is currently doing tests at a rate of around 2.1 million per week, which reflects the best available data. But Admiral Brett Giroir, the administration’s top testing official, later claimed that more than 3 million tests per week are being performed, enough that “everybody who needs a test can get a test in America, with the numbers we have.” He said that includes including people with COVID-19 symptoms as well as those who require contact tracing and some asymptomatic people who need to be monitored. He predicted that the United States will be doing 9 million tests per month in a few weeks. That’s the equivalent of around 300,000 tests per day—where we’re at right now.

Amid multiple questions from reporters over how widely available testing truly is, Trump repeatedly returned to his talking point that the United States is doing more testing than any other country. “We have developed a testing capacity unmatched and unrivaled anywhere in the world,” he said. While the United States has in fact done the highest raw number of coronavirus tests of any country, its per capita testing rate is still behind several other countries’:

As reporters continued to challenge his claims, the president grew increasingly testy and ended the briefing with a racist meltdown. When CBS News correspondent Weijia Jiang asked Trump why he framed testing capacity as “a global competition,” he snapped, “Maybe that’s a question you should ask China. Don’t ask me. Why don’t you ask China that question, OK?” As Jiang, who is Chinese-American, asked Trump why he had put that question to her, he accused her of asking a “nasty question,” refused to answer a question from CNN’s Kaitlan Collins, and abruptly stormed out of the Rose Garden.

.@weijia: Why is this a global competition to you when Americans are losing their lives every day?

TRUMP: Maybe that’s a question you should ask China.

WEIJA: Why are you saying that to me, specifically?

TRUMP: I’m saying it to anybody who would ask a nasty question like that. pic.twitter.com/hokJOXASh8