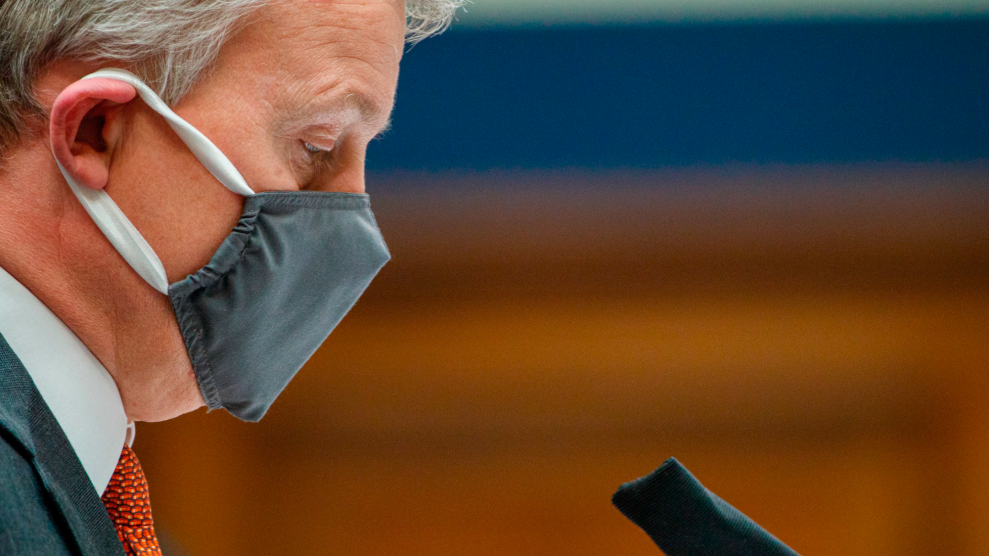 The Department of Health and Human Services ignored repeated warnings from the nation’s largest mask manufacturer in late January that the supply of personal protective equipment was inadequate for the coronavirus crisis, Dr. Rick Bright, the ousted head of the Biomedical Advanced Research and Development Authority, told Congress Thursday.

“I’ll never forget the emails I received from Mike Bowen,” who runs Prestige Ameritech, the top surgical mask supplier in the country, Bright said, “indicating that our mask supply, our N-95 respirator supply was completely decimated. And he said, ‘We’re in deep shit. The world is.'”

Bright’s whistleblower complaint includes more details about his email conversations with Bowen. According to the complaint, Bowen sounded the alarm about impending mask shortages on January 21 and offered to produce additional N-95 respirators “with government help.”

When Bowen testified later Thursday, Rep. Greg Walden (R-Ore.) produced a January 31 email in which Bowen said that he would sell masks to the US government “if and only if the VA and DoD become my customers after this thing is over.” Bowen told Walden that he specified that condition because it would take him three or four months to ramp up production, and he didn’t want to hire and train employees only to fire them when the government no longer needed masks to deal with the coronavirus pandemic.

On January 23, Bright suggested at a meeting with HHS officials that the coronavirus might already be in the United States and requested additional funds for his agency to combat the threat posed by the emerging disease, the report alleges. That same day, an HHS spokesperson said the Centers for Disease Control and Prevention had determined that the coronavirus posed a low threat to the US public.

HHS official Bryan Shuy “later told Dr. Bright that his request for urgent funding at the meeting on January 23[rd] set off ‘quite a shit storm’ after the meeting,” according to the complaint. “Mr. Shuy further relayed to Dr. Bright he had offended HHS leadership by pushing for urgent funding…According to Mr. Shuy, HHS leadership believed that BARDA already had a sizable budget, albeit nothing specifically for COVID-19, and that he should not have asked for additional resources to address the virus.”

In additional emails on January 23, 24, and 25, Bowen continued to warn Bright and Dr. Laura Wolf, another HHS official, of the impending mask shortages. Bright’s efforts to amplify Bowen’s warnings continued to fall on deaf ears, according to Bright’s complaint.

“From that moment, I knew that we were going to have a crisis for our health care workers,” Bright said in his testimony. “We were not taking action. We were already behind the ball.”

Dr. Rick Bright on the moment he realized the US was headed toward a crisis: “We’re in deep shit. The world is. We need to act,” Bright says a mask supplier told him in an email.

"From that moment I knew that we were going to have a crisis." pic.twitter.com/20wyAx1ZoV

This story has been updated to include details from Bowen’s testimony.