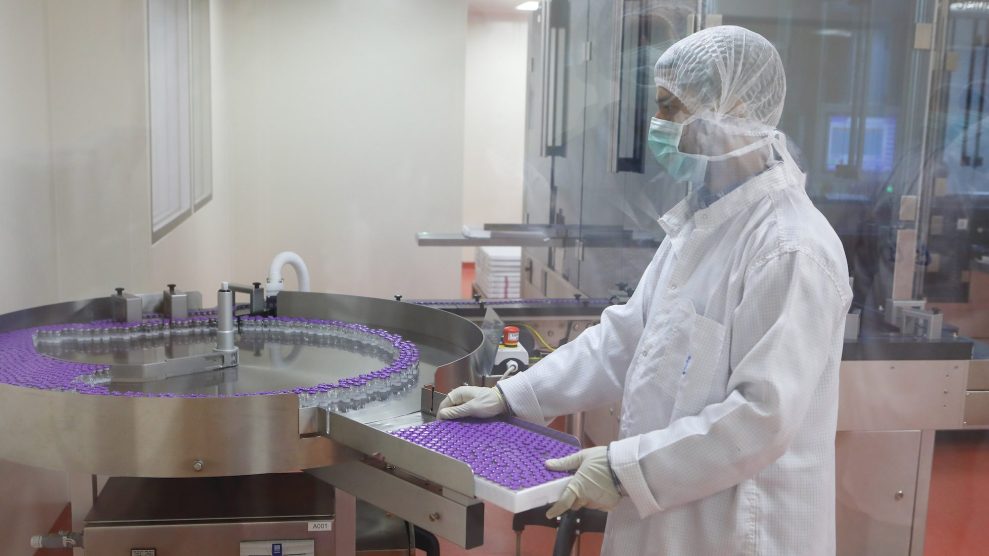 The Serum Institute of India, a drug producer working with AstraZeneca and Novavax to manufacture their COVID-19 vaccines.Subhash Sharma/Zuma

Earlier this month, the likelihood that the COVID-19 pandemic would actually end became a little more certain. On November 9, the pharmaceutical giant Pfizer and the German biotech company BioNTech announced that their coronavirus vaccine was more than 90 percent effective in stage three clinical trials. A week later, the pharmaceutical company Moderna also reported their COVID-19 vaccine was 95 percent effective. Both vaccines utilize a novel technology that harnesses the RNA messenger, snippets of genetic code that exist in the body that can be used to tell the immune system to produce antibodies that attack the virus itself. With those breakthroughs, a coronavirus vaccine on the market before 2021 seems more likely than ever.

So far, the disease has killed more than 1.4 million people, including 258,000 in the United States. The urgency to defeat the disease has drug companies creating a vaccine at the record pace of a matter of months—a typical time frame for vaccine development can be 10 years. On Monday, AstraZeneca and Oxford University also announced their vaccine was between 62 and 90 percent effective—depending on the manner with which the dose is given.

If these efforts resemble a race of hares, then the pace of vaccine development at Baylor College of Medicine’s National School of Tropical Medicine might be seen as the tortoise. “Officially, you could say we started working on this in January,” says Dr. Peter Hotez, the school’s dean and co-director of the Center for Vaccine Development. “You could also say we started working on this in January 2011. We couldn’t have moved so fast without doing that prior research.” The vaccine’s long development has not involved the cutting edge—and untested—technological advancements such as the mRNA method associated with other leading COVID-19 vaccines. The result is inexpensive and easily mass-produced; it also does not require elaborate sub-zero storage facilities that some of the others do. The number of doses required won’t be certain until further into drug trials.

Propelled with billions of dollars, including $4.5 billion from the US government, the Moderna and Pfizer candidates are now in stage three of clinical trials; after nearly a decade and $11 million in research, Baylor is entering stage one. According to the trade publication Fierce Pharma, Moderna received nearly $1 billion to research and develop its vaccine from the federal government through the vaccine development effort Operation Warp Speed, along with a $1.5 billion order for 100 million doses. Meanwhile, Pfizer—which wasn’t a partner in Operation Warp Speed—took $2 billion and agreed to produce 100 million doses. Effectively, these deals are part of the federal government’s efforts to immunize the population of the US, which it has said it will do free of charge. Still, questions linger about how to even distribute the Pfizer and Moderna RNA vaccines, which require storage at negative 80 and 20 degrees Celsius, respectively—a requirement others don’t face.

The higher budget projects have lucrative deals with the world’s wealthiest governments, like the United Kingdom, Canada, and Japan, to supply their populations with hundreds of millions of doses by the end of next year. But according to Dr. Jesse Goodman, a medicine and infectious diseases professor at Georgetown University who led the FDA’s response to the H1N1 virus in 2009, “that doesn’t come close to meeting the world’s needs.” In reality, a large combination of effective, inexpensive vaccines will be necessary to cover the nearly eight billion people on the planet.

“There are many approved vaccines using these kind of technologies. There is large scale manufacturing capability in the world that could be brought to bear for it.”

Baylor College has teamed up with Biological E, a large pharmaceutical manufacturer based in Hyperabad, India, which “didn’t have to build a new factory because they already had the infrastructure,” says Dr. Maria Elena Bottazzi, NSTM’s vice dean. “They didn’t have to hire new people that you needed to train because they already had the people. All those little things add up.” It also means that the cost of the vaccine will likely be less than $1 per dose, considerably less than the almost $35 per dose Moderna vaccine. “I mean, you measure it in rupees,” says Hotez. “It’s really inexpensive.” That puts distribution deals within reach for developing countries with large populations and significant numbers of poor people. Currently, Biological E plans to produce 1.2 billion vaccine doses using NSTM’s blueprint. And depending on how Operation Warp Speed shakes out, some of those doses could end up in the US.

There are about 200 COVID-19 vaccines in development right now and experts hope that the strengths of some of them could compensate for the potential weaknesses of others. The NSTM candidate is designed to be a standalone vaccine, but it could also be used to boost the effectiveness of others, including those slated for distribution in the US. “If it is shown that one of these other Operation Warp Speed vaccines aren’t performing as we’d like, in terms of durability of protection or waning antibodies, in theory you could do a boost with [recombinant] protein [vaccines],” says Hotez.

For those who might be especially high risk—people with preexisting conditions, for instance, or seniors—recombinant protein vaccines might prove to be more effective than others, which would make the NSTM vaccine the drug of choice in certain cases, rather than a booster for an earlier vaccination. “In some ways the recombinant proteins in early studies seem to make antibody responses that may be better than some of the RNA vaccines,” says Goodman. “It’s possible in certain populations, for example, one vaccine may be better.” There are other, inexpensive vaccines. The Oxford University and AstraZeneca vaccine that uses another established vaccine technology, where a coronavirus protein is inserted into a less dangerous cold virus, may be available with 3 billion doses next year, at an accessible $4 for each injection.

During the pandemic, the search for a successful COVID-19 vaccine has become the drug industry’s version of the space race, but back in 2011, drug companies paid little attention to the broad disease category of coronaviruses, which includes the viruses behind Severe Acute Respiratory Syndrome (SARS) and Middle East Respiratory Syndrome (MERS), which is why NSTM began its research. The school’s specialty has been vaccine development for neglected tropical diseases. Within that category are the diseases that affect the world’s poorest populations, ailments with hard-to-pronounce names, like leishmaniasis, a sandfly-spread illness that causes skin sores to appear across the body, or schistosomiasis, “second only to malaria as the most devastating parasitic disease,” according to the CDC. Because the return on investment for large pharmaceutical companies determines the pace and participants in vaccine development, those diseases are often overlooked despite affecting millions of people per year. That’s where Hotez, Bottazzi, and their colleagues at the school come in. “We make the vaccines no one else will make,” he says.

In 2003, a strain of coronavirus called SARS first surfaced in China. Soon, it spread to 25 other countries, infecting 8,098 people, killing 774 of them. The disease alarmed world health experts, but was successfully contained. During the following decade, SARS didn’t reappear. “The interest of the funders—even the scientific interest—was not as prominent because there was no SARS crisis,” Bottazzi says. So researchers at NTSM adopted the orphan disease and added a vaccine to their areas of inquiry. Those ten years proved essential to the school’s vaccine work this year. The genetic makeup of the SARS virus has approximately an 80 percent overlap with the most recent iteration of SARS, COVID-19. “We knew what sequence to pick, how to engineer it, how to produce it, how to scale it, and how to evaluate its quality,” Botazzi notes.

At this point, the NSTM vaccine is entering stage one clinical trials in India, where the stages of drug testing closely mirror those in the United States. If all goes according to plan, the candidate should enter phase three by February, with a similar number of vaccine subjects to the Moderna and Pfizer trials, about 40,000 people. Hypothetically, Hotez and Bottazzi say doses could see mass distribution in India and other parts of the global South by mid-to-late next year, which may lag behind the first wave of vaccines by about three months.

“History has shown that in past pandemics—including recent ones like H1N1—allocation of vaccines has too often been monopolized by high-income countries.”

From there, the drug could see international distribution. Biological E is working in conjunction with COVAX, an international partnership of more than 150 countries collaborating specifically to distribute a COVID-19 vaccine to countries with low- and mid-income economies. The body acts as a sort of counterbalance to the lucrative supply deals struck between major drug companies and wealthier nations, like the US, which isn’t a COVAX member. “History has shown that in past pandemics—including recent ones like H1N1—allocation of vaccines has too often been monopolized by high-income countries,” Dr. Seth Berkley, a former CDC epidemiologist and the CEO of Gavi, a member of COVAX that advocates for equitable vaccine distribution, wrote in an email. “As swine flu swept across the globe, the vaccines that were developed ended up mostly in wealthy countries, while the rest of the world went without them. It is clear that we cannot allow this to happen again.”

Typically, success at the lab is defined as “going from discovery, through process development, manufacture, investigational new drug filings, then getting it to early- or mid- stage clinical development,” Hotez says. From there, the hope has been that a drug company would notice that the research work has already been done for them, creating enough of a financial incentive to take up the drug and bring it to market. But in this case, as in many others, the coronavirus has created new demands and new rules. Today, interest in NSTM’s work comes much more easily. “This COVID-19 vaccine may be the first vaccine [of ours] ever to actually reach full licensure,” he says.