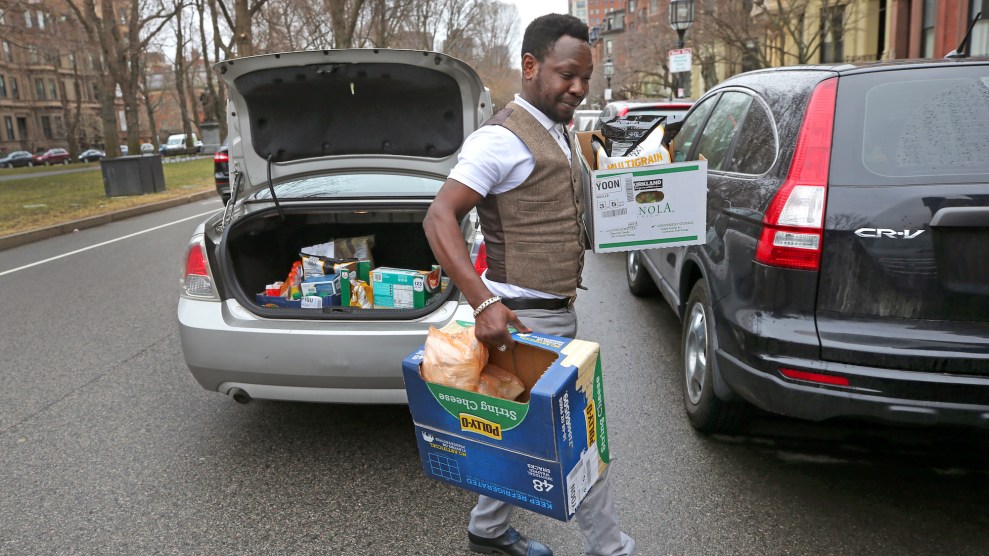 As the first shipments of the coronavirus vaccine are unpacked from the Styrofoam and dry ice and loaded into hospital freezers, the scramble to secure a place in line for the limited supplies is intensifying.

Across the United States, the first doses are earmarked for front-line health care workers; in most states, next will be the long-term care residents who have suffered most acutely from COVID outbreaks. A Centers for Disease Control panel making vaccine priority recommendations appears likely to designate the next wave of vaccinations, known as phase 1b, for “essential workers.” But the definition of “essential” is slippery: By some counts, including a rubric published by a Department of Homeland Security agency, “essential workers” include about 70 percent of the US workforce. That means states, which have final say on vaccine distribution, will need to set priorities—and industry representatives are eager to help them do so.

Who comes next is already the focus of a lobbying frenzy. “Priority 1a for us is getting our employees into that ‘priority 1b’ priority group,” Bryan Zumwalt, the executive vice president of public affairs for the Consumer Brands Association, which represents manufacturers like Colgate-Palmolive and Kellogg’s, told Quartz this week. Other industries lobbying for phase 1b priority include pesticide manufacturers, pharmaceutical firms, and zoo and aquarium operators, according to the Intercept. Same goes for airlines, including companies that either never instituted capacity restraints on flights or dropped social distancing measures.

Some of the other industries that want vaccines sooner rather than later have kept their workers on the job during the pandemic with few workplace protections. Take, for instance, the meat industry, whose executives have been talking about how their workers deserve vaccine priority, according to the Wall Street Journal. In early December, national associations for producers of beef and pork as well as the North American Meat Institute sent a letter to governors requesting meat industry workers receive “very high priority” for the vaccine because they constituted “critical infrastructure.” Those workers—a great many of whom are immigrants—”have been on the front lines ensuring Americans have access to safe, nutritious, and affordable food,” the trade groups said. But keeping meatpackers on the line has come with a steep human cost: at least 51,433 have been infected and 262 have died from COVID-19 as of mid-December, according to the Food & Environment Reporting Network.

COVID-19 spread so rapidly in meatpacking plants in part because their employees spend physically demanding 8- to 12-hour shifts often working shoulder-to-shoulder. Matters weren’t helped when President Donald Trump, following weeks of lobbying by meat companies, issued an executive order drafted by the industry that kept plants open even as their case rates were spiking. Company policies also played a role. “Some employees were incentivized to work while ill as a result of medical leave and disability policies and attendance bonuses that could encourage working while experiencing symptoms,” said a May CDC report. This fall, OSHA fined Smithfield Foods for “failing to protect employees from exposure to the coronavirus” at one South Dakota plant that became country’s top coronavirus hotspot. At a Colorado plant run by JBS, the largest meatpacker in the world, one worker was told she would lose her job if she took two weeks off to follow a doctor’s order to quarantine, according to a Mother Jones investigation; the company also gave bonuses to employees with good attendance records even after its first confirmed infection.

Also lining up for a shot at early shots are the gig economy giants Uber, Lyft, and Doordash. This month, Uber and Doordash sent letters to the CDC and every governor asking for early access to the vaccine. A representative for Lyft said it was working on the issue with state and local policymakers. Earlier this year, on-demand delivery and ride-hailing companies spent about $205 million on a successful California ballot initiative exempting them from a law that reclassified their workers as full employees eligible for overtime pay, health benefits, and paid time off—benefits that would be even more crucial during a pandemic.

Meanwhile, COVID-19 has made gig work even more precarious. Under pressure from gig worker advocacy groups, companies rolled out programs to provide payments to drivers who got sick even as they were incentivizing workers to keep taking gigs, my colleague Jacob Rosenberg reported. And workers reported being unable to access the extra funding touted by the companies. (“Instacart has still not provided essential protections to Shoppers on the front lines that could prevent them from becoming carriers, falling ill themselves, or worse,” the Gig Workers Collective wrote during an Instacart strike in March. “Instacart’s promise to pay Shoppers up to 14 days of pay if diagnosed or placed in mandatory quarantine not only falls short, but isn’t even being honored.”)

As more corporations tout the “essentiality” of their workers, it’s worth remembering what make them essential: their critical contributions to the economy—or their employers’ bottom lines?