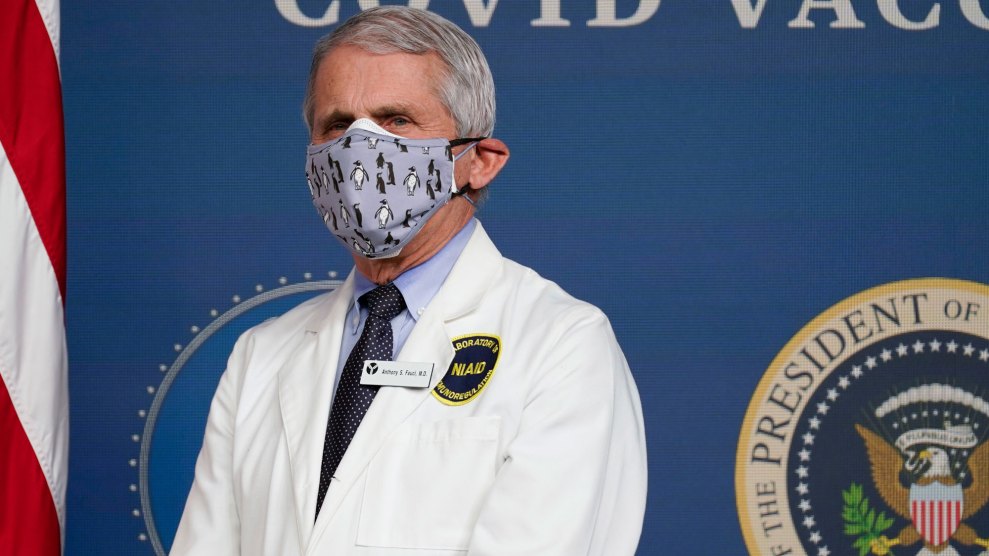 Dr. Anthony Fauci, director of the National Institute of Allergy and Infectious Diseases, listens as President Joe Biden speaks during an event to commemorate the 50 millionth COVID-19 shot.Evan Vucci/AP

On Sunday, Dr. Anthony Fauci, chief medical adviser to President Joe Biden, echoed a warning that rolling back public health restrictions on mask-wearing and mass gatherings too quickly could lead to a spike in COVID cases as the nation races to vaccinate millions of people each day and a more contagious and potentially dangerous COVID variant spreads throughout the United States.

As of Sunday, the United States reported, on average, 60,000 new COVID cases and 2,000 deaths per day. Although the numbers have declined in recent weeks, the decline seems to be leveling off too early. “Historically if you look at the different surges, plateauing at a level of 60,000 to 70,000 cases per day is not an acceptable level,” Fauci said. He pointed to a disturbing trend in Europe, where cases have increased 9 percent in the last week after a plateau.

Another infection spike? A fourth wave? Dr. Anthony Fauci reiterates his concern that COVID-19 cases have declined and plateaued around 60k or 70k cases — he says that's “unacceptable.” pic.twitter.com/bzbcEh0AJ3

Decisions this week from states such as Texas and Mississippi to end mask mandates and reopen businesses risk increasing the rate of spread. A British variant of the virus, known as B.1.1.7, is reportedly doubling its share of new US cases every 10 days. Researchers predicted that B.1.1.7 could become the predominant strain of the virus in March. “We do want to come back carefully and slowly about pulling back on mitigation methods, but don’t turn the switch on and off,” Fauci said on Face the Nation on Sunday. “It would be risky to have yet another surge.”

As U.S. coronavirus cases remain at a low not seen since October, a more contagious variant first reported in the United Kingdom has likely grown to account for more than 20% of new U.S. cases as of this week. https://t.co/nUfPxtXFZ7

The Centers for Disease Control and Prevention is expected to release guidelines for how vaccinated people are supposed to interact with others “within the next couple of days,” Fauci noted. Currently, the United States has so far administered nearly 88 million vaccines, at a rate of 2 million people per day. “You have more and more protection of individuals but also communities. We need to hang in there a bit longer,” Fauci said. “It’s not going to be like this indefinitely.”

Although vaccinations are taking place at a rapid clip, the rollout has proven as uneven as COVID’s impact on communities of color. Black, Latino, and Native Americans have been dying of COVID-19 at twice the rate of white Americans. The disparities are even worse for younger people. A New York Times analysis found that Black and Latino people have been vaccinated at no more than half the rate of white people. Fauci noted that doses would dramatically increase in the coming months, and Biden said on Saturday that the nation would have enough for every adult by mid-May, pushing up his previous timeline.