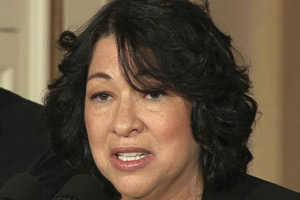 Starr voiced his backing of Sotomayor while delivering the keynote speech at a luncheon held in Los Angeles for Loyola Law School’s program for journalists who cover legal issues. He said that he “thinks very well of her.” He noted that he has not written any official endorsement letter for Sotomayor but that no one had asked him to do so—suggesting he would if requested. Starr said that he has told more than one US senator that he supports her nomination, but he wouldn’t identify which senators he has spoken to about Sotomayor.

Starr, dean of the Pepperdine University School of Law and a member of the rightwing Federalist Society, is one of the leaders of the conservative legal movement. A former judge and solicitor general, he served as the independent counsel who probed the Clintons on a number of fronts, most notably Bill Clinton’s affair with intern Monica Lewinsky. The long and quite graphic report he produced on the Lewinsky matter led to the Republican’s divisive and failed impeachment campaign against Clinton. Since then, Starr has worked on several death penalty cases, trying to overturn death sentences. He also represented a school board in Alaska sued by a student suspended for unfurling a banner declaring, “Bong Hits 4 Jesus.” He has worked for Blackwater (now known as Xe). More recently, he represented groups in California defending Proposition 8, which outlawed gay marriage in that state.

This isn’t the first time Starr has publicly offered support for an Obama nominee under fire from the right. In April, he wrote a letter to the Senate Foreign Relations Committee, urging it to confirm Harold Hongju Koh to be the top legal adviser at the State Department and praising Koh’s “irreproachable integrity.”

Starr has something of a working relationship with Sotomayor. As he noted during his luncheon talk, she twice came to Pepperdine to participate in a program the school runs for judicial clerks. “She was a huge hit with the students,” Starr said.

Starr has made supportive remarks about Sotomayor earlier. On May 26, appearing on Fox News, he noted that she had a “very fine record.” He said:

One of the most characteristics of a Justice is that she be humble, that she be modest in her approach to the Constitution.

But now he’s out of the closet as a Sotomayor booster. How will Rush Limbaugh, Newt Gingrich, and other conservatives who have tried to depict Sotomayor as a race-obsessed liberal activist take this news? More important, will Starr’s endorsement–this is true conservative cover–make it even harder for Senate Republicans to go after her?

This story was reported by Stephanie Mencimer from Los Angeles. You can follow David Corn’s postings and media appearances via Twitter by clicking here.