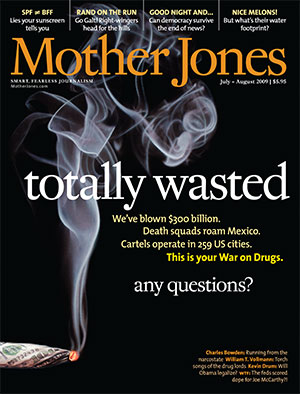 Conservatively, the federal government has spent $300 billion fighting the War on Drugs. And the upshot? Death squads roam Mexico, cartels operate in 259 US cities. We spend proportionately less on treatment than in Nixon’s day—even though that’s the only thing that’s shown to reduce abuse. Is there a saner way? We’re rolling out MoJo’s cover package on the Drug War starting today with Kevin Drum’s teetotaling look at decriminalization. Meanwhile, in the ediors’ note, Monika and I ask:

Among our leaders in Washington, who’s been the biggest liar? There are all too many contenders, yet one is so floridly surreal that he deserves special attention. Nope, it’s not Dick Cheney or Alberto Gonzales or John Yoo. It’s a trusted authority figure who’s lied for 11 years now, no matter which party held sway. (Nope, it’s not Alan Greenspan.) This liar didn’t end-run Congress, or bully it, or have its surreptitious blessing at the time only to face its indignation later. No, this liar was ordered by Congress to lie—as a prerequisite for holding the job.

Give up? It’s the head of the Office of National Drug Control Policy (ONDCP), a.k.a. the drug czar, who in 1998 was mandated by Congress to oppose legislation that would legalize, decriminalize, or medicalize marijuana, or redirect anti-trafficking funding into treatment. And the drug czar has also—here’s where the lying comes in—been prohibited from funding research that might give credence to any of the above. These provisions were crafted by Dennis Hastert (R-Ill.) and Bob Barr (R-Ga.) and pushed for by then-czar Barry McCaffrey, best remembered for being somewhat comically obsessed with the evils of medical marijuana. A few Dems complained that the bill, which set “hard targets” of an 80 percent drop in the availability of drugs, a 60 percent decrease in street purity, and a 50 percent reduction in drug-related crime and ER visits, all by 2004—whoops!—was “simplistic” and “designed to achieve political advantage.” Though the vote count was not recorded for history, it got enough bipartisan support to be signed into law by Bill “Didn’t Inhale” Clinton.

And guess what? The drug czar’s office has been perpetuating some crazy stuff ever since. To whit:

Since 1998, the ONDCP has spent $1.4 billion on youth anti-pot ads. It also spent $43 million to study their effectiveness. When the study found that kids who’ve seen the ads are more likely to smoke pot, the ONDCP buried the evidence, choosing to spend hundreds of millions more on the counterproductive ads.

So step one to a sane drug policy would be to ditch the liar’s law. Read more on our thoughts here. And learn why the feds scored smack for Senator Joe McCarthy!